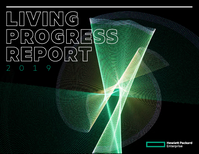 This year’s Living Progress Report also, for the first time, details racial diversity statistics of its team member population, an important step in being transparent and addressing systemic bias and inequality in our society.

Here are some highlights from this year’s report!

HPE continued to enhance a culture of social inclusion, equality, and responsibility:

HPE is impacting their suppliers in a positive way:

To find out more about HPE’s plan to create sustainable IT solutions that meet the technology demands of the future, read the latest HPE Living Progress Report.