A time for giving

Last year, I decided to test an absurd notion I’d been clinging to. Namely, that I was too busy at work to take time off for volunteer activities. It was even more ridiculous given that I work for a company where compassion is part of the culture—where we’re encouraged to give our time to help others and allowed a generous number of hours to do it.

So I went with some colleagues to visit patients in the Spinal Cord Injury Unit at the Houston VA Medical Center, which is for veterans of the US armed forces. It was during the 2016 Home of the Brave campaign, sponsored by the HPE Gives program. That visit blew my absurd notion out of the water. Not only did I have the time, I was blessed by the little bit I gave.

When Home of the Brave came around again this November, I really wanted to go. It took some rescheduling, but I made it. We handed out box lunches, T-shirts, thank-you cards, and a promise that “honor packs” full of goodies were on the way. 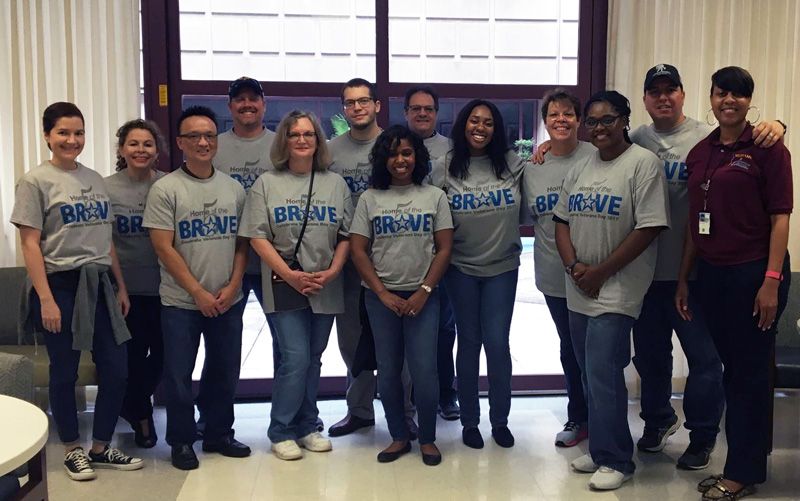 The lunches are a hit with the patients, who eat tasteless hospital food for months at a time. Both years I went, a few of them spoke fondly of the fried chicken lunch a local charity brings them on a regular basis. Getting to enjoy that one tasty meal is understandably a big deal.

Yeah, I think I can skip my nice lunch one day out of the year to go hand these folks a deli sandwich and a bag of chips.

As much as they like the food, what the patients I’ve visited seem to appreciate most is having someone just talk with them awhile. They come from various places to Houston for treatment, which is usually prolonged, so family visits can be rare. Such is the case for the three men I spoke with this year. Joe lives in another city in Texas, Jim lives in Florida, and Mr. K lives in Oklahoma. The latter two have been in the hospital for a very long time, with a long time yet to go.

I probably spent the most time with Jim. He was reading something on his phone when I walked in. The phone was attached to his apparently paralyzed left hand by a loop around his thumb. I asked if it was okay to interrupt. “Absolutely!” he said with a smile.

We talked about Jim’s home and family, current events, and other things my questions led to. He previously owned an IT company, and after learning I was from HPE, he seemed to really enjoy talking about technology. Jim is a delightful man, and I undoubtedly enjoyed our talk as much as he did.

At the end of each visit, I like to ask the patient if I can pray for them. So far, the answer has been yes. I also like to hold their hands while praying, and I’ve always felt them hold mine in return. With Jim, since he has mobility in his right hand, I grasped just that one with both of my hands. But then he brought his limp left hand up next to mine, so I took hold of it too. Even sweeter, though, was that after I prayed for Jim, he prayed for me. That was special. These veterans are special. And for those of us living free in the US, they deserve our thanks, our attention, our time.

You know what I missed by not being at work that day? Nothing. Not a single thing. The company rolled along just fine without me. And you know what else? I’ve never considered not taking my many days of vacation, and that makes it even crazier to have ever thought I didn’t have a few hours to volunteer. 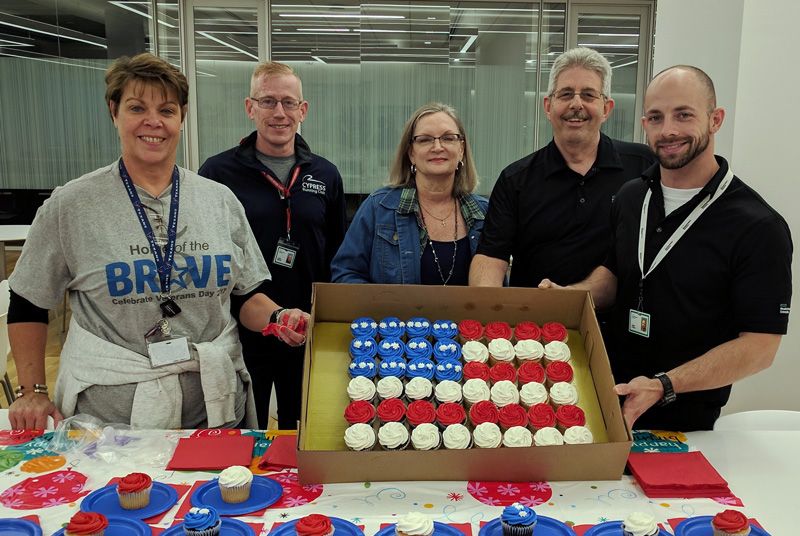 Passing out cupcakes to HPE employees for Veterans Day awareness

If you have the same kind of hesitation about volunteering that I used to have, let me leave you with a challenge…

Find a cause that speaks to your heart. Then volunteer for just one event. And see if doing a little something for someone else gives you a high you want to keep chasing. With the kind of high that comes from volunteering, you’ll always find it and you’ll never regret it.

Paula Perry is on the Employee Communications team at HPE. With a zeal for clear, on-point, and engaging communications, she’ll gladly write or edit just about anything. Paula also manages the corporate writing style guide.