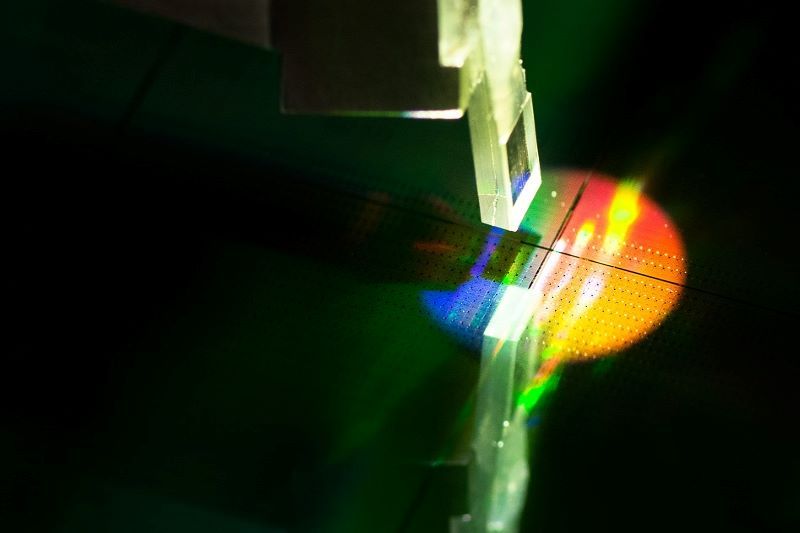 That’s the thrust of the story the LSIP has published in IEEE’s prestigious Photonics Society News. The article, “Enabling Advanced Integrated Photonics for Energy-Efficient Communication and Computing” was authored by Di Liang, Marco Fiorentino, Thomas Van Vaerenbergh, and Beausoleil.

The article outlines the development of a research vehicle that delivers a much more efficient and powerful silicon photonics platform. It also outlines a vision of a more open silicon photonics industrial ecosystem targeted at computer-communications applications in datacenters and HPCs. Beausoleil and his team envision an ecosystem that parallels that of electronics, with a wide horizontal interaction instead of a series of silos.

“While just a few of us were involved in the article writing, the technical innovations, breakthroughs, and non-stop progresses are a result of the dedication, passion, sacrifice, and contributions of all current Large-Scale Integrated Photonics Labs members, as well as many former ones and people from elsewhere in Labs,” says Di Liang, distinguished technologist at the LSIP lab and de facto leader of the UC Santa Barbara-based researchers Beausoleil refers to as “the Santa Barbarians.”

“What we were really trying to do is connect super-high bandwidth switch ports to each other,” says Beausoleil. “That's what PathForward was about. In the heterogeneous III-V on silicon system, what we're thinking about is connecting a switch port to a node in a supercomputer or connecting two nodes in a desegregated computer to each other.”

This would allow developers to have, for instance 16 micro-ring lasers. When only eight are used, you could turn the others off, saving a great deal of energy.

“On the other hand, when you need all of them, you turn them all on, and they're belting out data,” says Beausoleil.

Another application scenario that Liang outlines is to use a single comb laser to provide dozens of low-noise laser beams with different colors, each carrying 25 gigabits or more data per second after passing corresponding micro-ring modulators to enable massive terabit per second data transmission through a single optical fibre. This approach, he says, only costs a small fraction of the power, chip size, and expense, compared with a conventional solution.

“The heterogeneous platform is an attempt to find out just how far we can take it,” says Beausoleil. “Can we actually reach the point, where we can put everything we need for a big system on one platform? A platform that incorporates III-V on the same chip?”

As exciting as pioneering new ways to implement a photonics practice, it is the ecosystem that might prove even more innovative.

“The existing photonics industry is entirely vertical,” says Beausoleil. “What that means is that every company works on its own, does its own research, shoulders its own production expenses, and pays its own nonrecoverable engineering expenses.” Compare that to the silicon electronics industry, he says, where virtually nothing is vertical, an idiosyncratic structure which is a product of photonics history.

“The silicon photonics industry was born in the telecom industry, which started out vertically by necessity, but it is no longer necessary,” says Beausoleil. “We need to make silicon photonics look like silicon electronics and that will require industry-wide collaboration.”

It isn’t just the inherited structure of the photonics industry that needs rebuilding, according to the Santa Barbarians and their associated tribes.“The problem that we face now in data centers and high-performance computing, is that even though the data is growing at a ridiculous rate, we still build the machines with more or less the same architectures today that we built them with 20 years ago,” according to Beausoleil. “And we relied on cheap memory getting cheaper and network drivers getting faster and transistor densities growing to avoid the inevitable. But now we're in a corner.”

If all you do is use silicon photonics to make a better wire, Beausoleil and his crew believe you have missed out.

“The real advantage silicon photonics has, and in particular dense wavelength-division multiplexing (DWDM) photonics, is for computing and computer networking.” With it you can, if you choose to do so, “completely rearchitect large-scale computers, from the ground up, using the capabilities that DWDM silicon photonics will bring.”

So the IEEE Photonics news article Liang, Beausoleil, and the others have written is an outline of a completely new photonics – both a new research vehicle that can help to turbocharge current silicon photonics – and a distinctive vision for the future.