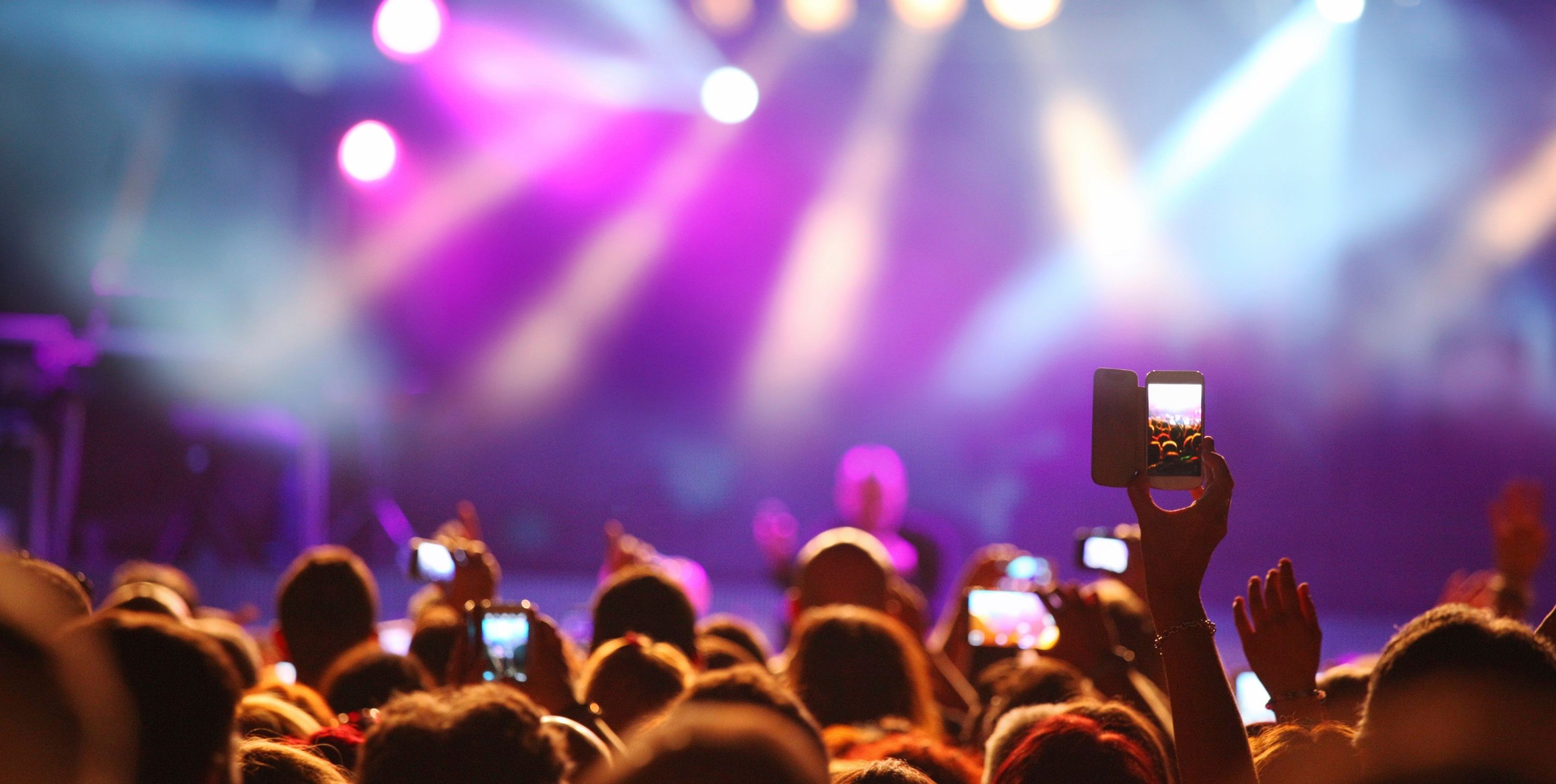 It was around 3am, and I was very tired. Not tired in the same way I get these days at that time of the night (or morning), but this was 17 years ago, so I think I handled it better then. The dim track lighting in the studio didn’t add any extra energy to the room. Luckily my nerves were supplying all of the alertness I needed, with the unfortunate side effect of shaky hands and sweat on the forehead.

“I’ll be in the production area listening in,” said Dave as he walked out of the studio. “Holler if you need me!”

I smiled, and then brought my attention back to the console. The current song had about 15 seconds left before ending, which meant that it was almost time to turn on the microphone and say something clever, or useful, or informative…..or just avoid sounding like an idiot.

I have to admit, I never pictured my first time as a radio DJ to be like this.

…but I’m getting ahead of myself. 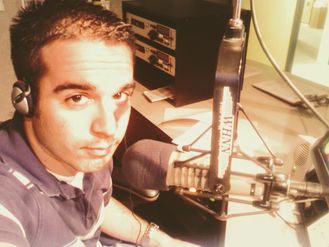 Jason at his DJ workstation

When I was a young kid, I was fascinated by the voices and music that came from the little black box. Before bed, I would take out my small, portable radio, put on my headphones, and slowly turn the dial through every FM and AM station on the band. My hope was that I would pick up on some sort of far-away conversation, a new song, or something mysterious that made its way over the night time airwaves. I was a geeky kid, and I was OK with that.

I would surround myself with off-beat interests, like radio, because deep inside, I was very timid. I had severe self-confidence issues, and these kind of oddities helped me forget about my own weirdness.

My grandmother and my aunt, the two women who raised me, would love to tell you about all the times I cried over my own shadow. Growing up, you’d always find me hiding behind someone’s leg, sitting in the farthest seat from the front, or looking for ways to avoid a group conversation.

I was overly shy, and it started to take its toll on me when I reached my teenage years. By this time, I was used to getting talked over and pushed aside by anyone who was “louder” than me. In fact, I started to get a sense about people right when I met them, and knew right away if they were going to have that overpowering personality. Strangely enough, it was this type of person that changed my life.

Let me take you back to that day in my 7th grade class. My teacher was friends with a local radio DJ, and he agreed to come speak to us about his job. I’m sure he assumed it would be a classroom full of kids who didn’t really care what he was talking about, but that’s because he didn’t know I was going to be there. I knew exactly who he was because I used to hear him through my headphones before bed. During his visit, while everyone was zoning out from their post-lunch fill, I was completely captivated by what he talked about. I’m not sure why, but I left school that day thinking I could do exactly what he does. So when a kid gets excited about something new that happened that day, what do they do?

“Grandma!” I said as I got into the old station wagon after school. “I want to be a radio DJ when I get older.”

She looked at me as if I just told her I had learned to fly by flapping my arms.

She was absolutely right.

Before you jump to conclusions about my grandmother, you have to understand that she is brutally honest. If she felt that you said something stupid, she would make it known. But that’s why people love her, and that’s why I respect her. She brought up a good point - how does a shy kid who doesn’t talk end up on the radio? Even though it seemed impossible, I never let the idea go, and I never stopped talking about it.

Years later, in high school, I met Mike, who is one of my best friends to this day. After crashing at his house one weekend, I walked downstairs to find his mother and neighbor sitting and drinking coffee.

“You guys go out last night?” asked his mother.

“Have you ever met Karen?” she asked.

I reached out to shake her hand.

“She lives next door. Her husband works at the radio station.” “Hello,” I said. “Mike mentioned you before.”

“You should introduce him to your husband,” suggested Mike’s mom.

“Sure,” said Karen. “I’m headed back now. You should come with.” 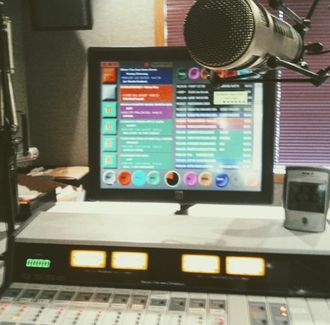 My heart dropped. I didn’t realize that after a very late night of playing video games and eating chili cheese burritos that I’d be interviewing for my first radio job. I mean, did I even really want to be on the radio? By that time, I had been talking about it for years, but I guess the idea was just that – an idea. Clearly I was just terrified of the idea becoming a reality.

We walked next door and I nervously shook hands with her husband. She had heard from Mike’s mother that I was a good kid, and explained that I was interested in working on the radio.

“We’re always looking for reliable part-timers,” said her husband. “Swing by the station around 2:30 in the morning on Saturday. That’ll be a good time to go on for an hour and see if you like it. There’s going to be a guy working at that time, so I’ll let him know you’re coming. He’ll show you the basics. His name is Dave.”

...which brings us back to this:

“I’ll be in the production area listening in,” said Dave as he walked out of the studio. “Holler if you need me!”

I smiled, and then brought my attention back to the console. The current song had about 15 seconds left before ending, which meant that it was almost time to turn on the microphone and say something clever, or useful, or informative…..or just avoid sounding like an idiot.

To be honest, I sounded exactly like you think a 17 year old talking on the radio for the first time would sound like, but that was okay with me. My sense of accomplishment that night didn’t come from the idea that I finally made it on the air. Instead, it came from the feeling that I was taking my first steps out of my protective shell. I was growing up, maturing a little, and leaving the shyness behind me.

I ended up spending a total of 9 years on the radio, and had plenty of interesting adventures. I’m most proud of the fact that I worked though my nerves and shyness, and opened up new opportunities for myself. Today, when I work with students on career skills, I find that confidence issues can sometimes hold them back. Confidence in our own abilities is crucial to having any kind of successful career, however some people struggle with approaching it.

My advice is simple and nothing new, however it worked for me and perhaps it’ll help someone else out there. Keep putting yourself in those uncomfortable situations so that your brain gets accustomed to the stress, and learns how to convert nerves into positive energy. In some situations, it can be helpful to just “dive in” and let your instincts take over. When the fight or flight switch gets turned on, we have an amazing opportunity to learn a lot about ourselves and our limits.

Self-confidence is one of those things that others can sense in us almost immediately. It can make or break that first impression that you give to someone. As we all know, first impressions count! Understand that it will always be a work-in-progress for all of us.

I really had no idea what I was doing behind that microphone at 3 am, but I knew one thing – I had overcome a hurdle in my life, and I was very excited to see what I could do next. 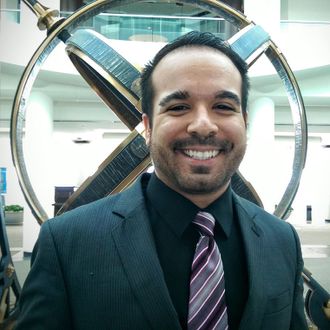 In addition to working with professional level talent, he is actively involved with university students and new graduates. This includes mentoring on career skills through campus visits, and promoting the HPE culture to the next generation of innovators.

Stay connected with Jason on LinkedIn

Thanks for sharing your story, Jason!  We can all learn from each other's story and I appreciate you telling us yours.