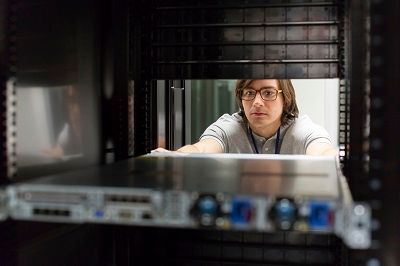 That’s the ambitious goal Executive Vice President Antonio Neri announced at the Bloomberg Sustainable Business Summit in New York this week. By 2025, Hewlett Packard Enterprise will increase the energy performance of our product portfolio by 30x from a 2015 baseline.

In the past decade, we have made great strides in cutting the energy and emissions intensity of our product portfolio. In the last five years alone we’ve reduced the energy used and CO2e emissions per unit of performance of our high-volume servers by 68 percent.

As we work to further drive efficiency in our products, our biggest gains will come from increasing our products’ performance per watt of electricity. That’s what makes innovations like HPE Moonshot so exciting.

A case study featured in a new report by CDP, A paradigm shift in total cost of ownership: From procurement to product innovation, shows that HPE’s energy-optimized Moonshot servers provide considerable savings in both environmental—and financial—impact.

Consider this: energy-optimized servers are expected to grow from 2% in 2015 to 11% by 2019. According to the case study, this shift would save nearly 40 TW of electricity and more than 30 million tons of C02 emissions, the equivalent of taking 6 million cars off the road for a year. Further, the study shows that customers would save up to $3.8 billion in energy costs and the total environmental impact could be reduced, in economic terms, by up to $6 billion.

Now just imagine the impact if all traditional servers were replaced by energy-optimized servers. CDP did, and estimates triple the savings in five years: 120 TWh of electricity, $12 billion in internal energy savings and $20 billion of total environmental impact.

A radical transformation of product innovations and, just as importantly, customer demand for those innovations is real and happening today. CDP is reporting that we’ve reached a tipping point in the way businesses calculate their total cost of ownership. Sustainability is now increasingly incorporated into the procurement decisions of major purchasers, including Walmart, Unilever, General Motors and the U.S. military. In fact, new acquisition guidance from the Department of Defense asks suppliers to hardwire sustainability into new innovations to limit environmental impact. And manufacturers are feeling the pressure, with 69% of the Global 500 companies reporting to CDP stating they’ve seen increased demand for lower-carbon products and services in 2016. And 58% of these companies say they’ve engaged with their customers on climate change related issues—three times the number just three years prior.

Clearly, the scale is tipping in favor of sustainable innovation. Customers and investors are demanding it. Companies have only one clear choice—innovate for a low-carbon economy or get locked out. I am proud that HPE made the choice to lead with sustainable innovation, and I remain optimistic that more U.S. companies will make this bold transition too.

Way to lead the charge and make a difference Lara.. I appreciate your work on decreasing carbon footprint of HPE and hope other corporations will do the same. Keep up your great leadership as these sustainability efforts will impact us all!

I Do Entrust The HPE Can Become A Leader Into An New World Business And Developmental Business Adventurers.

Our Companies And Their Enterprises LLC Would Make Great Strides.

The United States Of America Should Offer Noble Peace Prize To Someone That Accomplish The Reduction.

Peace To Our USA In Outstanding Efforts An Accomplishments.