Hot-rodding the light engine: how a new quantum dot approach to lasers speeds up computing 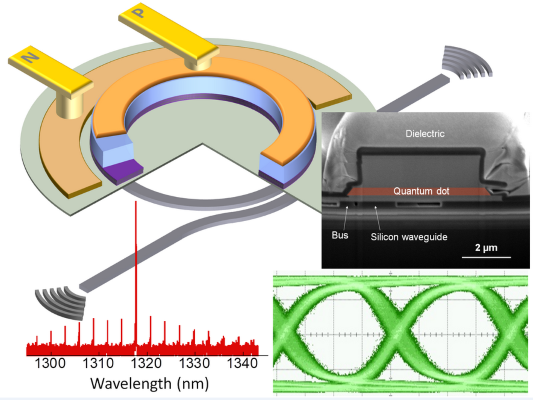 Di Liang, senior research scientist and research manager for Hewlett Packard Labs, is the corresponding author of a paper, which was recently published in the highly respected journal Optica: Hybrid quantum-dot microring laser on silicon.

The paper describes the work done by Liang and his team on utilizing a new material to enable energy-efficient photonic technology for high-speed data transmission in datacenters and supercomputers. His co-authors are Chong Zhang, Geza Kurczveil, Antoine Descos, and Raymond G. Beausoleil.

“We demonstrated a compact and energy-efficient light engine,” explains Liang. “The unique part is, although we have been doing this kind of a microring laser on silicon for years, we now used a different lasing material.” The new material contains a "secret sauce" called quantum dot.

Quantum dot has several unique advantages over the conventional quantum well material widely used in semiconductor lasers. For one thing, it allows lasers to operate with a substantially lower threshold, requiring only a tenth of the electrical power to get the same performance, making it ideal for high-performance computing. This provides ~1 pJ/bit energy efficiency; 15X to 20X better than products currently on the market.

Considering this is the first attempt, Liang believes there is still huge space to improve.

"This light engine can also be versatile, with possible uses in optical computing and other emerging applications.," he says.

Liang’s team is working with a commercial foundry to develop a process design kit utilizing quantum-dot material that will be publically available in two to three years.

Future high-performance computers demand highly dynamic data rates, e.g., a few terabytes per second communication bandwidth between switch hubs, and hundreds of gigabytes per second bandwidth between nodes and hubs, in order to overcome the challenges to rapidly growing traffic. Integrated photonic interconnect on silicon is believed to be one of the best solutions for low-cost, energy efficient, and high-speed data communications because of its fundamental advantages in high-volume throughput and dense integration. Applied with signal multiplexing techniques, e.g., wavelength division multiplexing (WDM), large bandwidth data links have been proved to be achievable on silicon. In such a system, an on-chip, robust, low-power consumption laser source is the key component as well as one of the fundamental limits to the silicon platform. In this work, we report the first hybrid silicon microring lasers with quantum-dot (QD) gain material to show great potential for uncooled, highly energy efficient, and isolator-free operation. The hybrid silicon QD lasers have a microring cavity with a 50 μm diameter that incorporates InAs/GaAs QD gain material at a 1.3 μm emission wavelength. The threshold current is as low as 0.7 mA under continuous wave (CW) operation at room temperature, and the laser operates at stage temperatures of up to 70°C. We demonstrate, to the best of our knowledge, a hybrid QD laser with non-return-to-zero (NRZ) communication at a record-high direct modulation rate of 15 Gb/s with energy efficiency of 1.2 pJ/bit. We believe this work shows huge benefits from superior QD lasing material and hybrid photonic integration not only for data communications but also optical memory and many other emerging applications.