How Pollock, Nietzsche, and Winnie the Pooh gave me the audacity to create

How do you follow up a smashing success?  How do you prepare yourself to think of something really novel?   How can you move beyond self-censoring to get to something truly original, and then how can you communicate your ideas to others?  What tools can you use to help find analogies and touchstones that help you leap forward instead of holding you back?

Recently I was listening to our Senior Fellow Stan Williams talk about neuromorphic computing.  He was describing using Memristors to create the chaotic, spiky behavior of our brains and how it is theorized that some of that random jitter could be the source of that uniquely human capability: the sudden insight that hits like a lightning bolt, completely illuminating the landscape of the moment, freezing it in time and allowing you to examine everything in exquisite detail.

It immediately took me back to late 1998, when I was sitting in the back of an AOL conference room listening to complaints about the HP-UX C compiler. It was the end of a week of customer visits to a new class of customers, Internet Service Providers, and the way that servers, storage and networking were designed, sold, and delivered was blocking them from keeping up with the exponential growth in demand.

As I half paid attention to the compiler discussion, I started sketching on my green engineering pad. That’s when the lightning bolt hit me. Before the discussion ended, I had a new product category and a long term development agenda: Short term solutions to the pains of the new service provider community, but also some pretty far-out ideas about the “dynamic re-configuration of compute and storage.”

The eight years of development from sketch to product launch are a story for another time, but today we call this category HPE BladeSystem and Composable Infrastructure.

Six months after the launch, it was clear that c-Class was a hit. Still, there was that moment when you’ve completed an engineering challenge that’s consumed you for so long, when you wonder two things: Is this still relevant, and what comes next?

The market results showed that c-Class remained relevant. But given that markets evolve fast, was there a bigger opportunity we hadn’t identified?  For me, the answer had to be yes.

Blades represented a fantastic optimization in physical packaging, as well as power and cooling, but they still ran the same software images as traditional infrastructure. We had the flexibility to quickly deploy the resources and Virtual Connect only added to that flexibility, but there was still a level of abstraction I thought was wanting, the ability to assemble just the right amount of compute, networking and storage for a given job, adding dynamic range to the concept of modular hardware.

The problem was this time there weren’t any “lightning bolts” headed my way. BladeSystem c-Class was so successful that individual changes seemed too incremental. I could run up a catalog of features to change, but there wasn’t a complete vision. Then an opportunity came up that forced my hand. I was invited to an IEEE seminar to discuss the evolution of blades and future directions. Our BladeSystem c-Class accomplishments were easy enough. The question was how to articulate what would come next.

I came up with six key words that described what I wanted to build this time around, substantially different from what was making us successful to date:

I’m an auditory learner, at my best hearing and telling stories, perhaps a bit unusual for an engineer, and certainly not what I needed to communicate to the majority of the IEEE attendees. I needed a different device to strike up a conversation, not only about what we should do, but why we should do it. I needed something to show the value of heading in unchartered waters. I needed a visual.

Sometimes you can comprehend art because you understand the science of the subject or of the techniques of craftsmanship. Other times it’s the reverse, you can see the solution to technical problems in the seemingly unrelated resolution of aesthetic challenges.  What really stops you in your tracks is when both happen simultaneously.

As I struggled to tell my story, someone made a comment about a study of the fractal dimension of Jackson Pollock paintings as a method of authenticating them. I had always been interested in the abstract expressionist. I had worked through Santa Clara University as an Assistant Preparator at the De Saisset Museum, so I had seen good and bad abstract expressionism. But there was always something for me in Pollock.

In his action paintings, I saw echoes of bubble chamber photographs, and complex time-varying processes superimposed over each other, like looking at a sequence of stroboscopic images of liquids flying through space super-imposed over each other. Pollock himself described his art as “motion made visible — memories arrested in space.”

There was an intersection of art and science that fascinated me, even if it was unintended by the artist.  So I decided to challenge myself to see if I could use my characteristics to describe what I found fascinating about Pollock’s art: 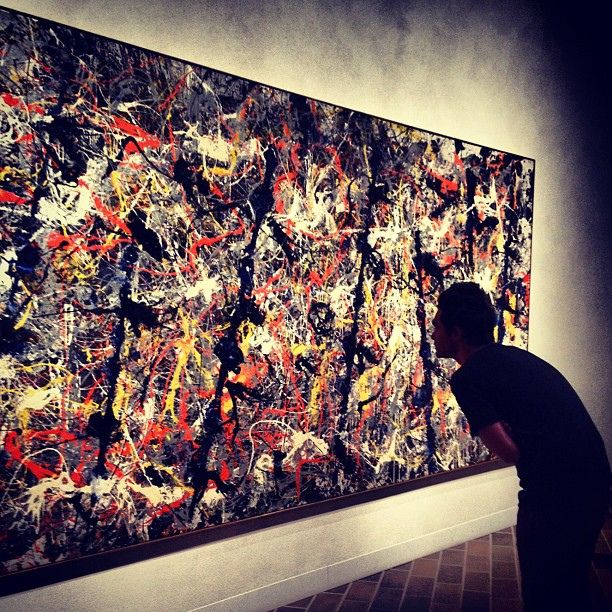 Probably not worth a passing grade in freshman Art History, but now I had a visual and story, a way to help me start the conversation with a broader audience and if nothing else get them to argue with me about why I was wrong about Pollock and why it wasn’t art, or why one of these characteristics didn’t matter.

My contributions to the advanced development program we call The Machine can trace their origins back to these discussions. I continue to plague my colleagues with engineering presentations interspersed with art, classics, and poetry; everything from Friedrich Nietzsche’s “Thus Spake Zarathustra” to A. A. Milne’s Pooh Bear.

A team vote for a project code name once got me to recite William Blake’s “The Tyger” and then argue that it is not about the problem of evil but about the awareness of the artisan and engineer during creation.

The audacity to create is the kindred spirit which links the artist and the engineer, being open to the influence of both disciplines has made all the difference to me.

I really enjoyed the post esp. where you succinctly captured what it could mean to be 'struck by a piece of art'. It also provided some interesting insights into the eureka moment that sometimes strikes us every once in a while. All the best in perpatuating more insights.