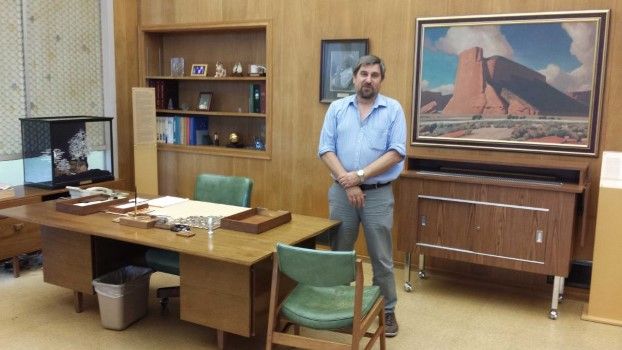 Milojicic in Bill and Dave's office

HOW I BECAME AN ENGINEER

I grew up playing alone in a small yard in downtown Belgrade. My first toys were tools, hammer, saw, and pliers. From the first days, I was exposed to problem solving by my great uncle who was both a cinematographer and electrician. It carried over to school, where I especially became fond of math. I went on to win awards at the high school competitions at the town, republic and even went to national level. While I was attracted to chemistry and physics, I also liked foreign languages and completed evening courses in English, then later German, and finally French, which all in their own way helped me in my engineering career.

I was driven by challenges but was also pragmatic. So, when the time came to go to university I chose the Electrotechnical Faculty, which at the time was deemed one of the hardest to graduate from and guaranteed subsequent employment. I spent my summer internship working in a cement factory in Volos, Greece, where I worked on a mixture of old technology (circuits and breakers) and at that time emerging 4-bit microprocessors.  My BSc project was on hybrid computing, which surprisingly enough I am addressing again 37 years later.

Early in my career, I started trading off perfection for the time to delivery so I ended up being the first to graduate from my class.

My first eight years as an engineer I learned so much working on operating systems at the Institut Mihajlo Pupin in Belgrade. We supported up to 16 users on i8086 computers we developed, while competition at the time (IBM 3600/4700 and NCR machines) was largely supporting one or two users. This work, an operating system for transaction-based computers, was also the basis for my MSc thesis, which I completely during my day job.

Realizing that I could not get a PhD the same way, I looked into a grant by the German government. I was told that it was impossible to collect all the documents in time. But if they haven’t discouraged me to apply, I might have not even considered it. However, this turned out to be one of the best decisions I have ever made. I collected all the documents and was awarded the grant, while simultaneously avoiding the war that was convulsing Serbia at the time.

While in Germany, I worked 5 a.m. to 5 p.m. on my thesis and completed it in slightly more than two years, even though a typical PhD lasted around years in the same department.

My next job was in Cambridge, Massachusetts, at the Open Source Foundation (OSF) Research Institute. For the past 20 years I have worked and lived on the West Coast for Hewlett Packard Labs. Some suggest that my next location will be in Japan, although my family hints at Hawaii.

If I look back at my engineering career, the biggest challenge was matching the rate of change. Few things went as planned. I remember contracting a job to do a device driver for a banknote counting machine that would occasionally skip a bill or two – not a happy solutions for banks. Instead of developing a completely new device driver able to respond to the real-time requirements of the protocol, I modified firmware on the board – a more complex but also a more elegant solution.

After completing my PhD thesis I was interested in going to work at the OSF Research Institute in Grenoble, France. I had collaborated with them extensively during my PhD, but ended up going to Cambridge instead. There are many other similar technology and life examples, and in each case adjusting to the circumstance was what mattered most. 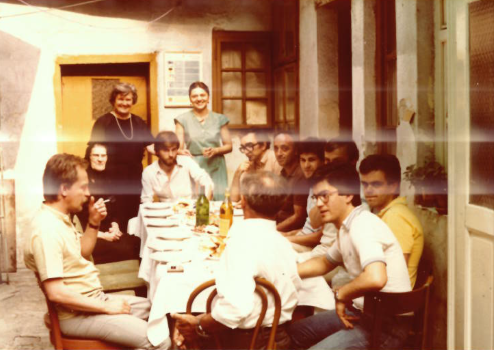 The yard in Belgrade

The hardest part in my career was confronting the technology transfer from research to production, which came as a surprise to me as my first project ever was so successful in terms of deployment across Eastern Europe and the former Yugoslavia. But early successes were misleading. No matter how successful, inventive, convincing, easy –  you name it – the research prototype, a business was always more inclined to rely on external acquisitions. It took me a long time to understand that acquisition brings into the company involved a finished product, development teams, and consumers. But I still like innovating and some of the most successfully innovations, such as inkjet printers, were a new development that was developed internally at Hewlett Packard Labs.

The next hardest effort was to learn soft-skills.

It took me three coaches, six mentors, and many approaches over 20 years to move from being a bull in a china cabinet to someone who can employ an acceptable social style. In the process I learned that I am an ENTJ in Meyers’ Briggs, Driver-Driver in Social Styles, and Number 8 in Enneagram. Self-introspection is not only important for self-awareness, but also to develop the ability to recognize the styles and needs of others and behave most effectively. The golden rule always applies: Do to others only what you would like to be done to you.

The extra mile always pays off. Almost any extra effort I made in my career eventually paid off. Every little bit here or there helped me later. Performance evaluations helped convince management of the value of new products, a seemingly unnecessary subject at university turned out to be essential for graduation, and so on.

Be ambitious. The higher the goals you set, the more you strive in your research, development, productization, the further you will go. Be reasonable but also ambitious. Challenge all assumptions. Many assumptions hide new opportunities that wait to be addressed.

If things can go wrong they will. I was on an important international site visit to meet the team I worked remotely. Over dinner, I was energized to start the next day. Tomorrow morning, one of key team members had to take his wife to the hospital for an emergency visit, another team member broke his rib, and the third resigned, and all of that within first hour of the visit. But I kept my cool, and eventually all got resolved one or the other way. The person who resigned was replaced by other competent people, the broken rib healed, and the wife is happily taking care of kids in a European town. We worked through all the adversity.

Volunteer outside of the profession. I learned about leadership, management, and social skills outside of work as much if not more than at work. Soccer coaching taught me how to build trust with the team. I coached youth (under ten through under 19) at both the recreational and competitive level. You have to build an honest relationship with kids, they read you easily. The same is true for your fellow colleagues.

Volunteer in professional organizations. Volunteering at IEEE enabled me to grow professionally and to be recognized by my peers. I became an IEEE Fellow in 2010 and an ACM Distinguished Engineer in 2009. I was IEEE Computer Society President in 2014 and this year I am a candidate for IEEE President. When I was promoted to HPE Distinguished Technologist, two reference letters were from the past and current IEEE president. But even more importantly, I learned from my IEEE colleagues by writing papers, attending conferences, writing standards, and many other activities. At various IEEE boards I was exposed to interactions that I never may reach to experience in industry.

Finally, you must take care of yourself. We all pulled all-nighters, especially as we were young. I even spent 36 hours working nonstop on my 50th birthday. The job required it and I complied. But you cannot go on forever like that. Even steel breaks. You need to eat healthy and exercise, for yourself and for your family.

The world is changing. The roles of academia, corporations, startups, industry labs, governments, and professional organizations have all changed in many ways.

Of the many traditional labs that existed when my career began – Bell Labs, DEC Labs, Xerox Parc – there are only a few left, and they are much more product driven than they used to be. Universities teach much more pragmatic courses and many students stop at the MSc level to go to startups or into industry in general. Professional organizations are trying to match the needs of industry that is charging ahead with new products in new technologies.

But the engineering landscape was never as exciting as it is today.

The end of Moore’s Law is becoming more imminent with the onslaught of generated data profoundly affecting the industry. AI and deep learning are driving generation of new accelerator chips, deployed in self-driving cars and in many appliances. New technologies are being explored, such as quantum, blockchain, and AR/VR, and there is a lot of technology conversion, such as SW-defined networking storage, high-performance computing, and AI/big data, power and energy, ICT, and many others.

At the same time, humanity is being exposed to many new or intensifying challenges: Cybersecurity, sustainability, global warming, the needs of developing countries, and many others. These challenges all offer a fertile ground for engineering solutions that can help. With all these challenges and opportunities it is great to be an engineer today. I wish I was starting my career now, but I am sure that the new generations will be up for the challenge.