Rise Against Hunger: HPE preps over 100,000 meals for hunger relief

We at HPE are committed to helping the millions of people around the world impacted by a lack of food. That’s why we partnered with Rise Against Hunger to prepare 100,000 meals for those in need. 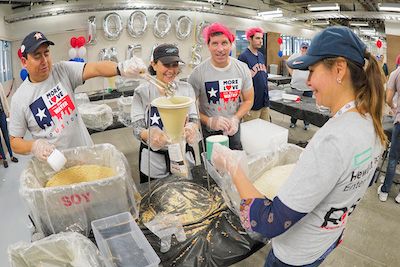 On Friday, November 17th, 1000 HPE volunteers headed down to the basement of our Houston campus to spend four-plus hours volunteering to package food for those most in need. We worked in partnership with Rise Against Hunger. With a goal of 100,000 packaged meals in mind, HPE packaged ALL of the food on hand and packaged 104,328 meals in total!

All of us at this site—from our executive leadership to individual contributors—were motivated by a collective mindset: We’re a BIG site with a BIG heart can and will make a BIG difference! I may be biased, but the folks at HPE Houston are amazing!

HPE Houston employees wanted to help others like the entire community (and beyond) helped us after Hurricane Harvey.

When you live near the coastline like we do in Houston, we get used to hurricane season. Some years are quiet, and
others leave a lasting mark on the landscape and community.

This past August, Hurricane Harvey hit Texas hard. Unlike most storms that come and go, Harvey made landfall and then stalled over Texas for several days, not only producing devastating winds and high tidal surges but also generating excessive rainfall with historic flooding. As hard as it is to imagine, some areas received more than 40 inches of rain in less than 48 hours, creating the costliest tropical cyclone on record and inflicting nearly $200 billion in damage.

Everyone has a Harvey story. Everyone knows someone who suffered deeply from the hurricane. I was fortunate. I spent three gut-wrenching days safely at home watching the news. Days later, I spent time ripping out floorboards, dry walls and more from the homes of family members directly impacted by Harvey’s wrath.

Heroes and helping hands more powerful than any hurricane

People came by car. By boat. By helicopter. And they didn’t stop coming. They helped in unimaginable ways: volunteering at nearby shelters, hosting complete strangers or risking their lives saving others.

Thousands of heroes stepped up to help out. The best part? The volunteering hasn’t stopped. It's just gotten bigger, better and stronger. Just like the city of Houston.

We have done our small part, but it’s not over and the best is yet come.

I was there on November 17th with hundreds of my HPE colleagues and friends. It was three months to the day since Harvey formed. As a company—and as a city—we’ll keep showing the world that we’re in this together.

I’m proud to work at HPE and even more proud to help others and the city of Houston. Houston Is Our City. Houston Strong isn’t just a saying here. It’s a way of life.

I sat down with Mark Potter, Senior Vice President & Chief Technology Officer Director, Hewlett Packard Labs. Mark helped spearhead this effort. I asked him about how and why we connected with Rise Against Hunger, the global reach of their efforts and how HPE is helping. Let me share our discussion with you.

Can you tell us a little bit about why HPE teamed up with Rise Against Hunger?

Our leadership at this site really wanted to give back to communities in a way that showed how much we all appreciated the city, state and nation coming to help our community. We simply wanted to partner with an organization that is focused on helping those communities with the biggest needs.  Rise Against Hunger is an international hunger relief organization that distributes food and life-changing aid to the world’s most vulnerable. Part of their mission is to respond to sudden, ongoing crises to meet immediate needs of affected populations—and support the transition toward recovery.

During this hurricane season, the Rise Against Hunger team has already provided relief to communities of the coastal U.S. and the Caribbean affected by Harvey, Irma and Maria. They provided hygiene kits, protein bars, hand sanitizer, warehouse space and nutritious meals. Overall, they have supported 54,000 people and have distributed or pledged nearly 248,000 meals. With what happened to us both here in Houston and in Florida and Puerto Rico, it’s a great organization for us to partner with for this event.

What happens when the packaged food leaves our Houston campus?

Containers are shipped to those places that need help the most right now. Their last shipment went to Central America. Once our meals are completed there is a possibility that they will be shipped to Vietnam that just suffered a devastating Tsunami. Once the meals are shipped, Rise Against Hunger will notify us on exactly where the meals are going. We can rest assured someone in need will be helped.

What else has HPE done to help with Hurricane Harvey relief?

Through a combination of HPE employee contributions and the support of the HPE Foundation, we have raised almost $1.5 million for the American Red Cross, the Hurricane Harvey Relief Fund and other charities doing great work to rebuild our communities.

We have some truly noteworthy stories of employees volunteering their time and expertise to help others. For example, Jeff Weaver, Marcus Wehmeyer and Michael Johnston, Air Force veterans and wireless communications experts from Aruba, traveled from far distances to our Houston site. They helped distribute switches, access points and other supplies to HPE employees and customers in need, as well as donations to churches and shelters in the area. We even sent a cargo plane to Puerto Rico with food, water and basic essentials.

It seems we all know somebody that has been impacted by Hurricane Harvey here in Texas. Co you have a Harvey story too? If so, what happened?

There are so many stories but the thing that struck me is that it was not just about a few stories but really that almost EVERYONE had a personal story. The amazing thing about it is that even though many of our employees were directly impacted the stories they told were about how they were out in the community helping others. Talk about leading by example with a mindset of putting the other person first. It reminds me of Bill Hewitt and Dave Packard’s “Rules of the Garage.” It was just so energizing to see that character shine through so clear. It really was an example of what is best about people and our community. I have to say it was not just a local thing. It was the state, nation and world that came to help. I got calls and emails from friends all over the world asking what they could do to help.

Anything else you want to add?

I want to say thank you for all those volunteers that had the belief we could get this done and get this organized with the funding and people to do it. Equally important, I want to say thank you for the employees at the site for jumping in with great enthusiasm to help in giving back to others. It is a big goal and we met it—and we had blast doing it! I am really proud of our Houston employees and for HPE and all the encouragement and help we have been getting at every level to make this happen.

Hewlett Packard has always been a special company, rising to so many scientific, social and environmental challenges over the years.  No surprise that they are doing so much good as a team to help those in need in the world.   Go HP!