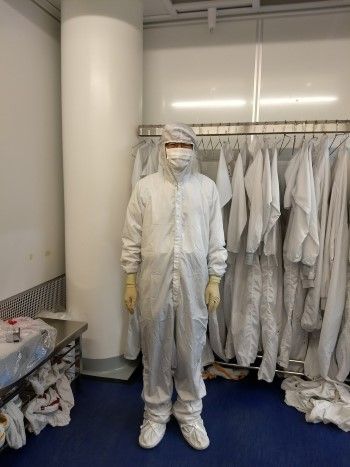 As a strategic customer engagement specialist at the HPE Executive Briefing Center (EBC), Carl Chow has led 2,569 customer briefings over the past decade.

As the EBC representative for Labs, Chow has used his engineering background and business education to explain the cutting edge work of our researchers to customers and partners. The standout during his tenure was The Machine, a project that occupied his attention, and that of the customers he served, from the time it was announced in 2014 until the 160 terabyte full prototype debuted in May of 2017.

But now Chow is leaving that position.

Back to his roots

Chow is taking a position that may not at first glance seem connected to his previous job. But given his long, rich history at HPE, it is. Chow is going to manage Labs’ state-of-the-art class 10 clean room.

“I’m anxious to get back to my engineering roots,” he says.

Anyone who is familiar with Chow’s work won’t be surprised by the criteria he’s going to use to judge his work. “If I’m successful nobody will ever hear from me again. My job will be to making our researchers successful and I plan to leverage all of the experiences I got along the way to make that happen.”

Everyone who gets to a certain stage in their career will have a wealth of experience. But few are as wealthy as Chow.

Born in Michigan, Chow grew up in Park Forest near Chicago and he got his BS in mechanical engineering at the University of Illinois Urbana-Champaign. On graduating, he worked for five years for General Motors at their Buick engine plant, where their goal was to make 5,000 V6 engines per day.

At the end of his tenure at GM, he moved out to the Bay Area to get a Master’s in manufacturing systems engineering at Stanford. Instead of returning to the Midwest and the automotive industry, Chow took a position at what was then HP as an engineer for NADO, the North American Distribution Organization, running distribution for printers.

Then he hit the gas.

In the next seven years, Chow served as engineering manager, operations manager, and managed the company’s literature distribution center before joining the EBC. Oh, and he got an MBA in business along the way as well.

So this 18-year HPE odyssey has led Chow to a point where everything he’s done before has come together to make him the ideal candidate to manage a delicate and complicated highly technical facility.

The thing you may not know about the HPE clean room is that it’s not just HPE’s. The facility is shared between Hewlett Packard Enterprise, HP Inc., and Leia, a mobile interactive holographic display startup, which was spun up out of HPE research. To do this right, Chow will have to consider the research needs, staffing, and product deadlines of three different companies with different goals and different timelines.

The cleanroom is like a kitchen where you can come up with different recipes, Labs’ Ashkan Seyedi told Chow. Currently the neuromorphic group is using it; there is work on VCSELs (vertical-cavity surface-emitting lasers); life sciences from HPI; and Leia’s work.

Chow says this position will allow him to employ his background in engineering, operations, distribution, and business strategy.

“I will have failed if a researcher goes to a tool and it’s not ready to be used,” he says. “My job will be to facilitate the experiments and the work of the researchers, to make sure the right gasses are available and all the tools are in good mechanical order and so on. My job will be to tackle the root causes of any issues that get in the way of that.”

What has Chow has learned in 25 years of work?

There are five big lessons he’s taking into this new position.

And perhaps most importantly, “Be grateful to everyone who gives you a chance.”

Slip the drummer some

By the way, Chow is also a rock and jazz drummer. No, calm down. You read that right.

So if you’re dying of curiosity to see what he looks like pounding the buckets to Don’t Fear the Reaper or Let’s Get Lost, holler at your boy.