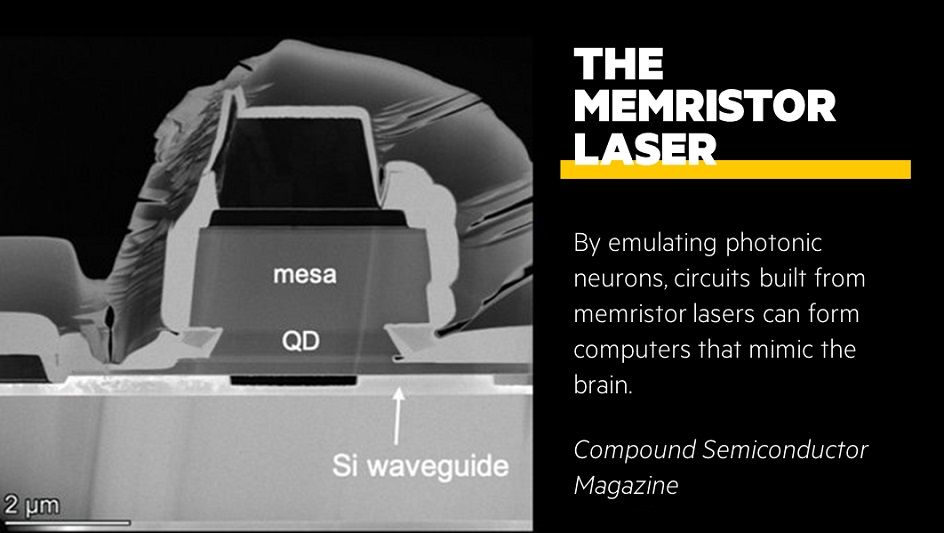 Far from simply writing a technical outline of the work, Tossoun has wound up telling a story that leads the reader from Alan Turing in the Thirties to Hungarian mathematician John von Neumann in the Forties to Atalla (a co-founder of Labs) and Kahng in the Fifties to our own erstwhile prober-at-the-fabric-of-the-universe Stan Williams in the current century.

For those unfamiliar with “memristory” note that Williams led the first team to build what was up until then a theoretical device that had been posited by UC Berkeley’s Leon Chua.

This class of memory device completes the quartet of fundamental components, the other three being the resistor, the capacitor and the inductor. Williams and co-workers fabricated this device by sandwiching two thin layers of oxide materials between a pair of platinum wires. By ramping up the voltage supplied to this simple structure, the researchers caused oxygen atoms to ionize and migrate, effectively changing the resistance of the material. Thanks to this, the device is able to store memory within itself as resistance. One of the greatest promises of the memristor is that it opens up new types of memory and computer architectures, such as memory-centric and neuromorphic computing. In these architectures, memory is centralized, and data simultaneously processed and stored on the same chip.

Fifty years after Atalla and Kahng created the MOSFET transistor, Labs’ Di Liang has integrated the MOS capacitor with a laser. He is now a space pirate.

“The result is the world’s first III-V-on-silicon MOS microring laser,” says Tossoun. This device “has the MOS capacitor integrated into the cavity of a laser diode to fine-tune the output wavelength of the light generated.”

Now Tossoun is leading the integration of a memristor with a microring laser in the hope that it will create a device that stores data within the laser. So far the provisional answer to this question is…yes.

Like all scientists, Tossoun and the rest of the LSIP crew, have rested on their laurels for no longer than it took to delicately sip a juice box empty. Now they are working on “designing a circuit that uses memristor lasers to emulate photonic neurons” a step toward using an optoelectronic platform to construct a neuromorphic computer, a computing systems inspired by the human brain.

On a practical level, all these innovations provide us with avenues around the inert Moore’s Law and allow us to maintain the lifestyle to which we have become accustomed, that of increasingly fast, big, and efficient computing; a must to tame the data flood that has become almost as much a fact of life as real floods.