Using the power of technology to improve lives

Part two of a six-part series 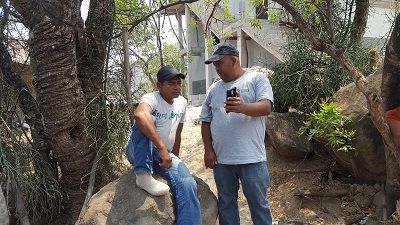 Four hundred million small-hold farmers around the world struggle to grow enough food to sustain their famililies, let alone grow a surplus that they can sell. One of the many ways the UN World Food Programme is addressing this critical issue is through AgriUp - Foursquare for Farmers, an initiative developed through their Accelerator Innovator.

To be pilotted in Guatemala and scaled-up to other countries in Latin America and beyond, AgriUp is a user-friendly, low-bandwidth smartphone app/website that aims to provide farmers with location-specific information including weather alerts, agricultural advice and nutrition tips.

“There is a risk of heavy rain in the long-term weather forecast for your location. We suggest that you begin to harvest in the next three days.” Think of the difference a practical weather alert like this could mean to a struggling farmer. Actionable tips about agriculture could ensure they have access to modern techniques instead of relying on traditional methods; information about prices could guarantee fair market conditions.

By connecting them to critical information through the power of technology, AgriUp could help farmers to improve their harvests, support their families, and go on to grow their businesses and local economies.

Millions of people around the world have almost no contact with a formal health system and according to UNICEF, the births of nearly 230 million children under the age of five have never been officially registered. Yet continued engagement with a formal health system throughout pregnancy, birth and the first nine months of life for an infant can dramatically reduce maternal and infant mortality rates.

Submitted by VaxTrac, BirthTrac is a clinic-based tool running on Android devices that will collect basic information and monitor women throughout their pregnancy and delivery. By registering newborns upon delivery BirthTrac can create a national birth registry that will allow children to be seamlessly integrated into early childhood services such as immunization.

Using a VaxTrac tablet PC loaded with the BirthTrac app, pregnancies can be registered and births can be recorded in near real-time. VaxTrac can then push regular SMS reminders directly to new mothers, notifying them when their children are due for vaccinations. As hard-to-reach pregnant women and newborns are registered through BirthTrac into formal healthcare systems, a wealth of information will become available, increasing the ability to monitor maternal issues and provide much-needed care.

To combat democratic recession, including decrease in voting turnouts around the world, governments are increasingly applying open government practices such as crowdsourcing to engage citizens, making it possible for people to participate in the political process in many new ways.

But paradoxically, this also creates issues. The lack of data processing tools for crowdsourced citizens’ ideas can lead to enormous amounts of data overwhelming civic servants and leaving their valuable input unused.

By using HPE big data analysis tools, Civic CrowdAnalytics, a concept submitted by a team of researchers at Stanford University, will automate the analysis and synthesis of crowdsourced civic input. Citizen’s input will be used more efficiently, ensuring that every citizen has an equal opportunity to have their voices heard. This is a valuable step towards securing a more participatory, inclusive and transparent democratic society.

Millions of people around the world rely on public water access points such as pumps and taps. But too often these fail due to breakdowns, vandalism or water scarcity. The result? People resort to using dirty water, travel long distances to find new water sources, or pay exorbitant amounts of money to access water.

While improving the sustainability of public water points is a critical for governments, they often have limited visibility into the root causes behind their failure. Data to Drops, submitted by Global Water Challenge, is a software solution that will enhance the Water Point Data Exchange, a tool that analyzes the causes of water point breakdowns.

These are just four of the inspired, innovative proposals we received, all focused on using the power of technology to improve lives. Stay tuned to this six-part blog to learn more about all our proposal phase winners.

Read part one of the series.