Though some people may not realize it, healthy oceans are critical to a healthy planet. Yet we know our oceans are struggling. Overfishing and illegal fishing are both major culprits in aggravating the oceans’ distress. Eighty-five percent of the Earth’s fisheries are fished to capacity or overfished. And often, other species are caught with the fish, threatening the survival of dolphins, whales, seabirds, sharks, and turtles, among others.

Certain fishing methods can destroy coral reefs and other important habitats. But in many places, fishing and its trade are not well-regulated, even though fish is the most frequently traded food commodity in the world. Global trade is complex and not very transparent.

It is estimated that at least 26 million tons of fish, which equates to about one-third of the global catch, are illegally caught and put into the marketplace each year. This is a huge problem when you consider that illegal fishing contributes to ecosystem destruction and human rights violations, threatens food security, and leads to billions of dollars in economic losses each year.

That’s why at WWF, my work is focused on putting a stop to illegal fishing. And we expect Detect-IT, the end product from winning HPE’s Living Progress Challenge, will help do that. Detect-IT will be a user-friendly tool, developed by Topcoder and HPE to conduct big data analytics. It helps customs officials, government investigators, responsible businesses, NGOs, investigative journalists, academics, and other interested parties search through trade data quickly to look for suspicious discrepancies in the fish products reported between countries.

The methodology was the brainchild of our partners at TRAFFIC, the wildlife trade monitoring network, but in its current form it is a slow and arduous process, done by hand. Detect-IT will automate that process and add many ways to quickly evaluate the data, and our goal is for it to make a big difference in how trade data can reveal illegal activity. Our initial goal is to use it to expose illegal fish trade, but ultimately, we’re working to expand its use to disrupt illegal trade across multiple products, like timber and other commodities.

Although my personal focus is to stop illegal fishing, I want to emphasize that there are so many ways that you can help our environment. At WWF, our motto is “Together Possible.” It is a call to action reminding people that together, we can protect our planet. One person and the choices you make every day can truly make a difference. WWF is a network that works in over 100 countries and has close to five million members worldwide. Without this global reach and support, there’s no way we could accomplish the goals that we do.

Now is the time to take action for our planet, no matter what path you take to do so. Technology is being applied to conservation at an incredible rate, people are more aware than ever of their impact on our planet, and seem to truly care about the health of the Earth and even some politicians are fighting for change. We are working hard to move forward to a healthier future. And we need all the help we can get to keep that momentum moving forward.

If you’d like to help save the world’s most vulnerable wildlife, habitats and natural resources, you can get involved with WWF and:

Want to find out more? Listen to this HPE Gives Podcast with Michele, and hear how the World Wildlife Fund is taking action to preserve endangered species. 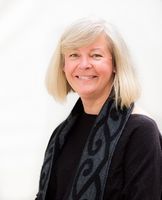 Michele Kuruc, Vice President of Oceans Policy for the World Wildlife Fund-US, leads WWF’s team focusing on the America government’s work to stop illegal imports of fish, estimated at one-third of US imports.