In partnership with Cray and simulation software vendor ANSYS, Prof. Bert Blocken conducted the first aerodynamic simulation and wind tunnel test of a full peloton of 121 cyclists and, in the process, set a world record in CFD simulation. 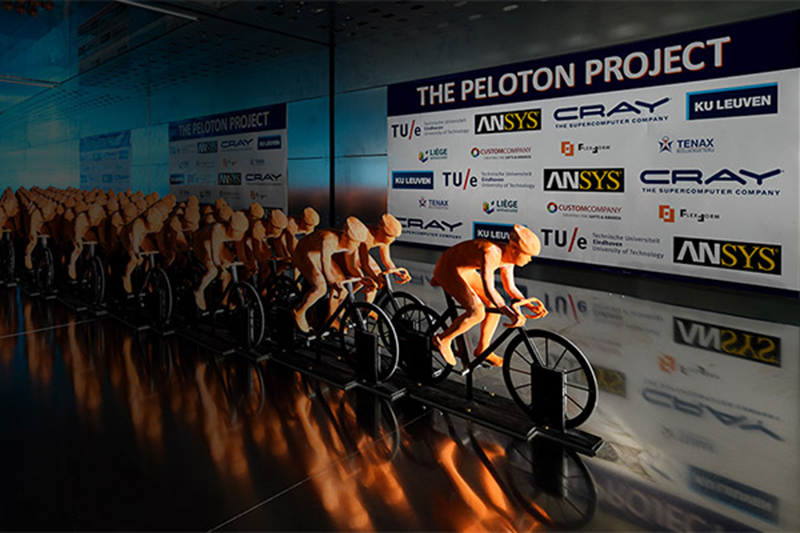 Aerodynamics in a cycling peloton aren’t what you might expect

A peloton is the main field or group of riders in a road bicycle race like the Tour de France. While it can take different shapes, the peloton’s overall purpose is to take advantage of the effects of slipstreaming, or drafting, behind other riders in the group. Air resistance is the biggest mechanical component preventing cyclists from going faster on flat road, and slipstreaming can save up to 50 percent of their energy.

Or that was the assumption, at least

The reality is that almost no information exists on aerodynamic resistance for riders in cycling pelotons. Systematic computer simulations or measurements have never been reported before.

Professor Bert Blocken of Eindhoven University of Technology (Netherlands) and KU Leuven (Belgium) set out to fill the information gap.

In partnership with Cray and simulation software vendor ANSYS, Prof. Blocken conducted the first aerodynamic simulation and wind tunnel test of a full peloton of 121 cyclists and, in the process, set a world record in CFD simulation.

With almost 3 billion calculation cells, the Peloton Project simulation was the largest ever in sports and the largest using commercial CFD software anywhere.

Simplified mathematical models commonly assumed the resistance to be reduced to 50 or 70 percent that of an isolated rider. In fact, those numbers are 10 times too high. Teams used them to set strategy such as determining when a cyclist should try to escape the peloton. And it could explain why so few breakaways actually succeeded.

Professor Blocken’s study, for the first time, systematically investigated drag reductions in two pelotons of 121 cyclists each. The simulations were validated by four wind tunnel tests, including one with a peloton of 121 models.

That’s up to 10 times less than previous assumptions, and it benefits almost half the cyclists in a peloton.

The Peloton Project by the Numbers

More About the Peloton Project

Jef is an applications manager with 35+ years of experience analysing and optimizing applications in the HPC industry. He joined HPE in January 2020 as part of the Cray acquisition.