High performing organizations like Netflix and Etsy are able to push thousands of updates per day. How? Methodologies like DevOps, along with technologies like containers, make this possible. Docker, arguably the most popular container engine today, enables developers to quickly and easily build, run and update applications in an effortless manner - and at scale.

When a developer needs to run container applications, access time to infrastructure is crucial. Waiting for days (or even hours) is no longer acceptable in today’s marketplace. Instead, developers are looking for a “cloud-like” experience to provision their container infrastructure.

To accelerate the deployment time of your container-ready infrastructure, we have extended the provisioning capabilities of ICsp to support Docker Enterprise Edition. ICsp will now automate the deployment of a Docker host on Linux using its intuitive user interface. Leveraging existing OS Build Plans that are included with ICsp 7.6 as the base, we've put together three new OS Build Plans with extensions for Docker Enterprise Edition installation. These build plans support provisioning Docker on the following Linux distros:

These enhanced ICsp build plans have been tested for the following platforms: Proliant DLs, BladeSystem, and Synergy. Also, although not officially supported, the OS Build Plans seem to run really well on virtual machines as well. 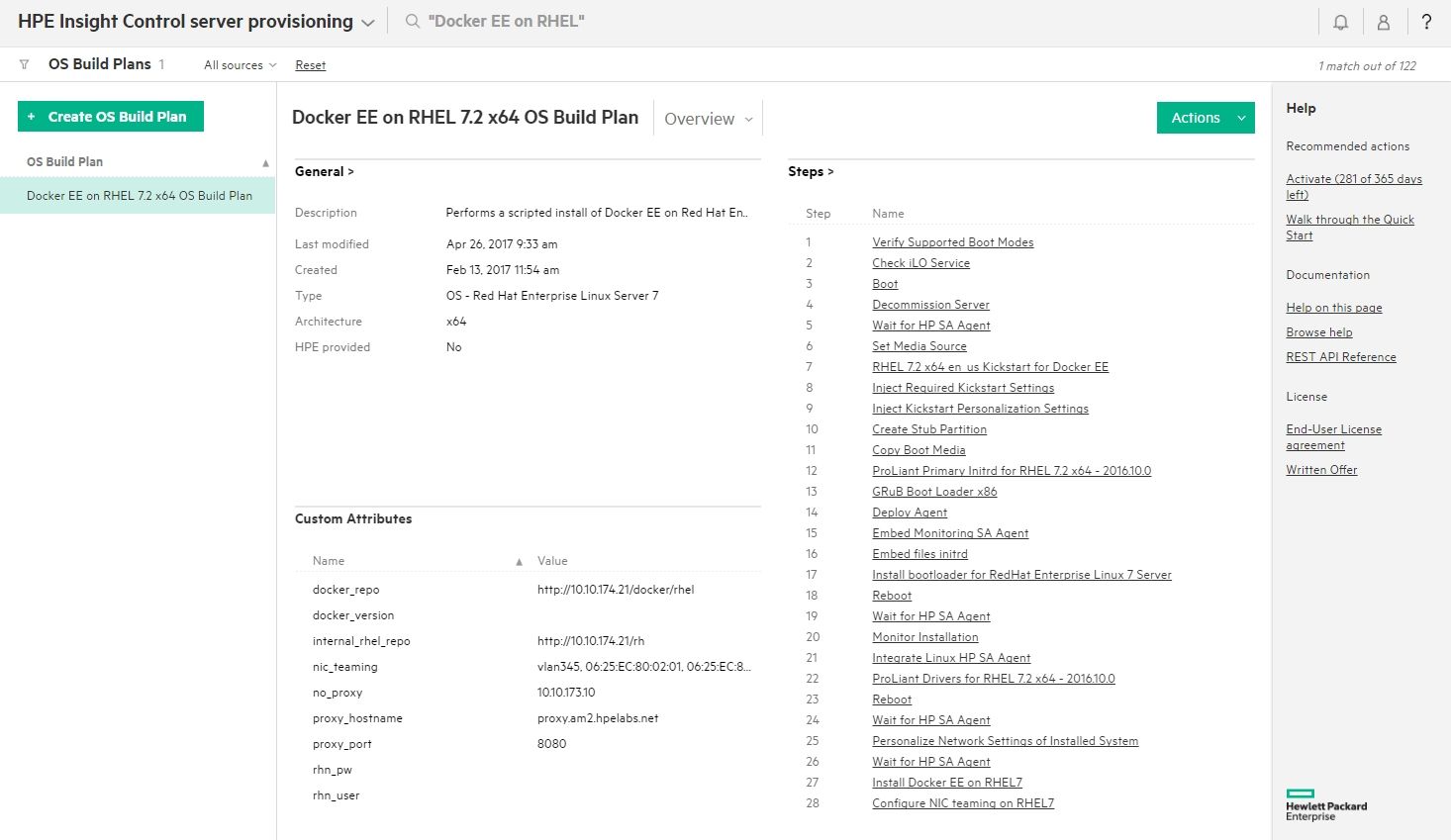 Likely one of the most important features of the Docker OS Build Plans is that the optimal storage driver configuration will be automatically set up, turning your Docker-ready server into an actual production-ready server. RHEL deployments will configure the LVM Device Mapper driver, leveraging capabilities such as thin provisioning and snapshotting. Ubuntu will use the stable and strongly community-supported aufs, while SLES will be configured with btrfs, (recommended by SUSE to enable some cool features for image and container management).The Docker OS Build Plans also enable users to choose the download location of Docker and other related software packages. Use the default Docker download location from the internet (an URL provided with your Docker EE subscription license) or a from local/alternative repository.

The same applies when it comes to installing some of the dependent packages. This option enables you to choose two different repositories: one for Docker and one for the rest of your binaries. This increased granularity means that you don’t need to download everything from the Internet or from a single local repository. Instead, you could use -for instance- a local repository for your Docker packages and the official OS repository for any required dependencies.

You are also able to choose the version of Docker Enterprise Edition that suits your needs by making use of the OS Build Plan custom attributes. If no version is selected, the latest stable found will be used by default.

Finally, and as an extra feature, you'll be able to provide HA networking by instructing the OS Build Plan to create NIC teams (in RHEL and SLES) or bonding (in Ubuntu) for one of more pairs of network interfaces.

To summarize, the provided OS Build Plans will improve the speed to provision Docker-ready servers on top of your HPE infrastructure, so you can start applying some of the DevOps principles of speed and innovation. This will enable your operations teams to spend more time working in the things that really matter while providing your development teams the tools to embrace the advantages of containers to innovate faster.

Want to learn more? Scripts and detailed instructions are available in the HPE public Github: https://github.com/HewlettPackard/ICsp-Docker-OSBP

Enjoy and please send us your feedback!