The edge, to put it simply, can be categorized as anywhere that’s not the data center or cloud. It therefore covers a wide variety of environments - a manufacturing floor, oil rig, truck or a power plant or even a golf course! - and is a source of arguably the biggest, fastest and oldest data of all. We are of course referring to data from the physical world i.e. pressure, temperature, vibration, light, and which are persistent and pervasive in all of our activities. Efficiently collecting, processing and actioning on this edge data will differentiate businesses that thrive from those that will diminish.

But businesses will need to address some key questions before tackling the edge data challenge:

HPE has created the new industry category of “Converged Edge Systems” with the HPE Edgeline series of products to address exactly these needs.

Conventional enterprise IT systems are designed only to interoperate with devices and networks found in IT environments e.g. switches, routers, storage arrays. But at the edge, we find a plethora of alien Operational Technology (OT) physical connections and logical protocols such as MODBUS, BACnet and PROFINET. Furthermore, the OT equipment speaking these protocols is frequently built on proprietary and siloed architectures. The “last foot” challenge for any edge system is therefore its ability to interoperate with OT protocols and equipment, because getting access to the data from the “thing” is a fundamental prerequisite for analytics.

Additionally, getting insight is only valuable if the business can take some action on it to improve expected outcomes. In other words, the goal of performing analytics is to eventually drive a control action e.g. prediction of a pump bearing failure in the next 30 minutes could drive control actions of bringing a backup pump online and un-loading the impacted unit. Just as with data acquisition, the edge system once again needs to “talk OT” using the appropriate physical connections and logical protocols, before it can command such actions.

This convergence of OT and IT capabilities into a single HPE Edgeline system also greatly reduces the latency between acquiring data, analyzing it and actioning on it. This is invaluable in safety critical scenarios or when monitoring capital assets for which downtime can be catastrophic to the bottom line. Also, isn’t it simpler and more efficient to procure, manage and maintain one system that “does it all” instead of multiple disparate units?  A major US automotive manufacturer thought so when they started deploying HPE Edgeline Converged Edge Systems on their factory floor, talking CANbus directly to components of the car being tested. A consistent increase in the number of high-quality cars produced per day makes for a simple Return-On-Investment (ROI) calculations to justify edge system investment. 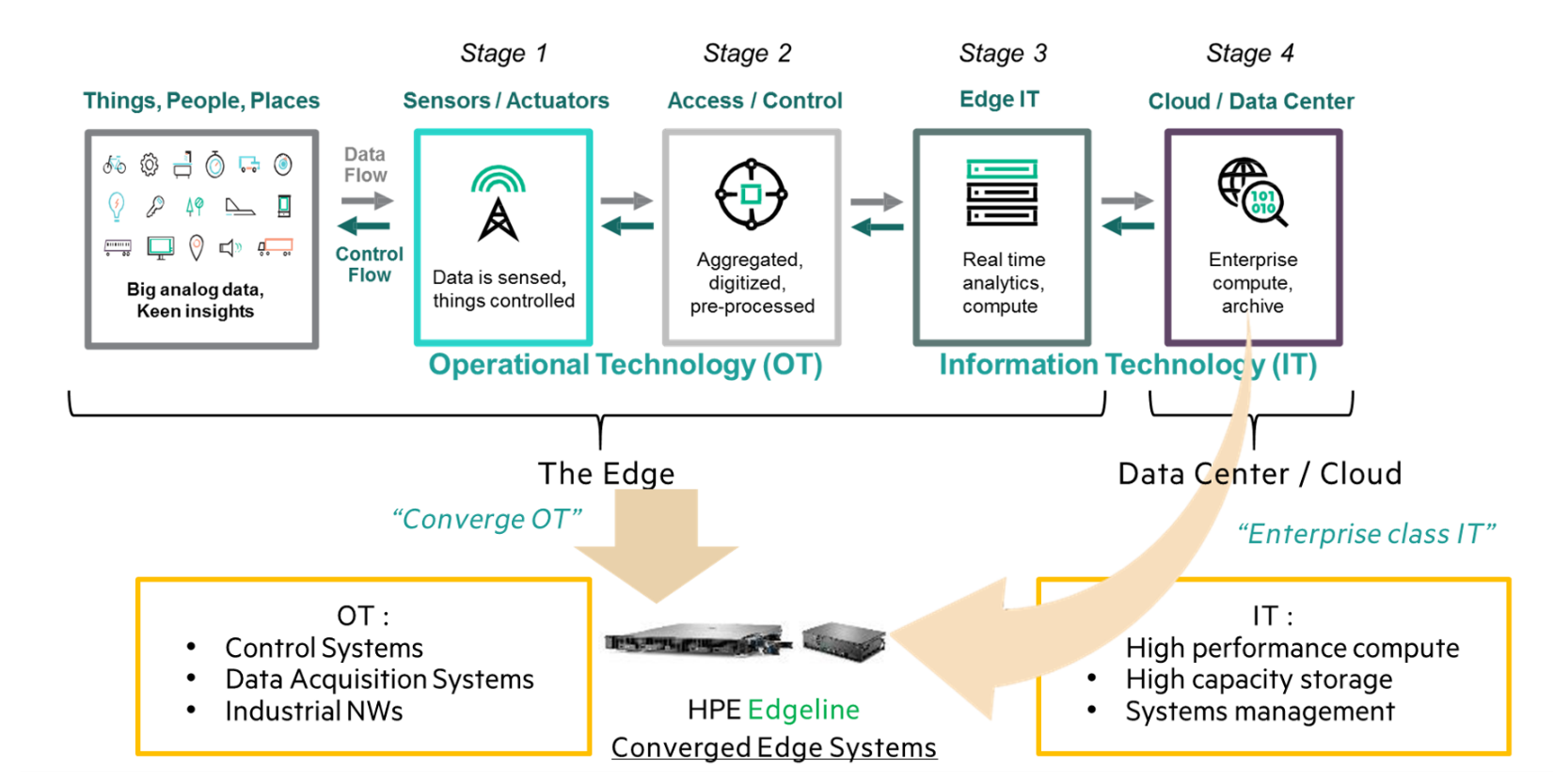 Analytics is at the core of deploying any edge system, because investments in data acquisition and control are increasingly driven by a desire to move away from independent siloed process control systems to highly- interlinked systems which provide real-time access to rich operational data, and most importantly, allow analytics to be run on this new “data lake”. But the sheer amount of data that is being collected at the edge means that much of the analysis must be done close to the source of the data e.g. a warehouse with 250 cameras can easily generate 2 Gb/s of video traffic – expensive and slow to send back in its raw form to data center or cloud. Furthermore, data security and privacy considerations may also dictate keeping as much of the edge data local as possible – regardless of whether it’s a secret cola recipe or your MRI scan data!

HPE Edgeline Converged Edge Systems deliver Intel’s flagship Xeon® compute capabilities to the edge, pairs it with large amounts of memory and storage to host big data sets, interconnects it with robust 10GbE and OT networks for fast data exchange.  This “no compromise” converged OT+IT edge system has now enabled HPE’s IT partners such as Microsoft, SAP, Citrix, Vmware etc. to redeploy their existing Enterprise IT data center or cloud capabilities to solve OT problems at the edge – an expanded Total Addressable Market (TAM) with just incremental R&D investment! A great example is the longstanding HPE and Microsoft partnership, where Azure cloud technologies are now being expanded to run at the edge e.g. Azure IoT Edge and Azure Stack, thus forming a true Edge-to-Core-to-Cloud architectural continuum.

A rapidly emerging method to analyze large volumes of data is using Deep Neural Networks (DNNs), or as popularly called, Artificial Intelligence (AI). The benefits of this can already be seen in everyday life, be it predictive suggestions in a search engine, image search, traffic management or language translation. Till recently, the compute power needed to run AI has been the sole purview of data center or cloud. But HPE Edgeline Converged Edge Systems are allowing AI accelerators from partners such as NVIDIA® and Intel® to now be deployed at the edge, close to the source of the data.

HPE collaborates closely with NVIDIA® on the Metropolis program, which is an ecosystem of AI-powered Video Analytics software vendors leveraging GPUs to deliver insights for a variety of industry verticals: security and surveillance, retail and industrial vision to name a few.  Cameras in public areas can autonomously detect overcrowding, fighting or other abnormalities that merit human intervention, while those at traffic junctions can rapidly detect accidents and alert emergency services. Retailers can better understand shopper behavior, and sports fans can get better real-time insight into the state of play. A major electronics manufacturer uses HPE’s Apollo systems to train DNNs to identify defects in silicon wafers, and then deploys them using Docker containers to HPE Edgeline systems with NVIDIA® Tesla GPUs on the factory floor, where images from a Scanning Electron Microscope (SEM) are analyzed in real-time. HPE Edgeline systems have been deployed in buildings and public spaces to automatically and accurately alert human operators on events such as traffic accidents, disorderly behavior or overcrowding.

HPE is the launch partner of Microsoft’s Project Brainwave, where Azure technologies are leveraged to deploy Deep-Learning (DL) “inference” algorithms to run on Intel® Altera FPGAs installed in HPE Edgeline systems. This is a popular solution for use cases like manufacturing quality assurance (QA) where low image batch sizes and quick results are the norm.  HPE Edgeline also runs demanding database workloads such as Microsoft SQL Server and Microfocus Vertica, with options to use industry leading Software Defined Storage solutions like Microsoft Storage Spaces and Vmware vSAN, for highly performant and highly available storage at the edge.

Finally, the enterprise IT heritage of HPE Edgeline means edge use cases can be fully cloud enabled, since cloud complements the edge by allowing for a macroscopic view e.g. across factories, across a city or across a long time-horizon.

Conventional enterprise IT systems are designed to exist in the relatively benign environment of data centers, but the edge is a harsh place where wide fluctuations in operating temperature and high levels of shock and vibration are the norm. Ruggedized HPE Edgeline systems were designed to thrive in these environments and are certified to a variety of standards such as NEBS Level 3. They also incorporate HPE’s renowned integrated Lights Out (iLO) systems management technology so edge systems can be remotely monitored and maintained without requiring a technician to actually travel to a desolate edge site for diagnosis and fixing.

HPE Edgeline Converged Edge Systems deliver the combination of data acquisition, analytics and control in a compact ruggedized package, so data from the edge can be collected, processed and actioned upon at the edge itself. Through innovative integration of OT and IT technologies, HPE Edgeline systems allow cutting edge IT capabilities like AI to operate on data from OT systems and take timely action to solve OT problems. HPE’s partnership with top software vendors like Microsoft has realized the vision of an Edge-to-Core-to-Cloud analytics platform where workloads can be frictionlessly moved to the area of greatest need without any compromise in capability.

Bharath leads WW Product Management & Marketing for the IoT & Converged Edge Systems Group at Hewlett Packard Enterprise (HPE). He’s currently driving adoption of HPE’s pioneering Converged Edge System products and solutions specifically designed to tackle the challenge of collecting, rapidly analyzing and actioning on the enormous quantities of data being generated at the various “Edges” such as Industrial IoT, Telco, Media and Enterprise.  Over his 14-year career in HP/HPE, Bharath has worked on over 20 products in roles ranging from hardware engineering to program management. Prior to joining HP/HPE he designed avionics systems for spacecraft, and is a keen proponent of IT+OT convergence, especially at the edge.