HPE is simplifying IT with Citrix Cloud on HPE SimpliVity

HPE has made two important announcements that make Citrix Cloud on HPE SimpliVity simpler and easier to use.

Last month at Citrix Synergy, HPE announced its entry into the Citrix Workspace Appliance Program supporting EUC deployments through Citrix Cloud XA/XD services on HPE SimpliVity for Hyper-V. HPE also showcased a plug-in under development that automates the connection of a HPE SimpliVity cluster to Citrix cloud that can be launched directly from System Center Virtual Machine (SCVMM,) which is also the official user interface for the HPE SimpliVity Hyper-V platform. This plug-in enables the HPE SimpliVity Hyper-V cluster to be recognized as a resource on which desktops and applications can be deployed. 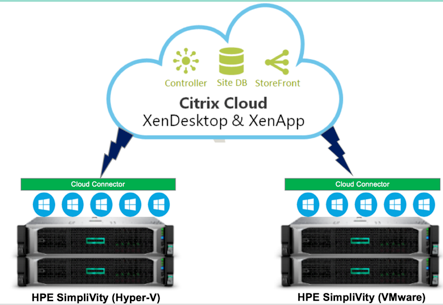 At HPE Discover Las Vegas 2018, we will be showcasing a similar plugin that HPE is creating for the HPE SimpliVity - VMware platform. Similar to plugin for the Hyper-V platform, this plugin will also enable the admin to select a HPE SimpliVity cluster from the federation and automatically connects and registers to the Citrix cloud, providing a turnkey appliance for hybrid cloud architecture. Where will the plug-in be installed and launched from? You guessed it right - directly through VMware vSphere Web Client, thus keeping the HPE SimpliVity solution value prop of ‘single-pane of glass for management’ consistent. The user interface of the plug-ins will also be the same across both hypervisor platforms to deliver a uniform usability experience. There are reference architectures and performance numbers available for Citrix XA/XD on HPE SimpliVity today and the same logic (calculations) can be applied to hosting desktops and applications resources through Citrix Cloud.

These offerings from HPE, further demonstrates the co-innovation and strategic partnership with Citrix delivering industry leading technology solutions that not only enables hybrid cloud, but also makes it simple and efficient. Both plugins are targeted for general availability around September/October and will be tested/validate by HPE and Citrix jointly. Once in market, these plugins will be available free of cost to HPE SimpliVity customers - old and new.

At HPE Discover Las Vegas 2018 from June 19 to 21, you will have the opportunity to learn more about these integration solutions: