HPE ProLiant Gen10 Servers: the world's most secure industry standard servers1
Digital transformation is taking place in businesses of all shapes and sizes. For IT to be successful in speeding time to value, a Hybridt IT infrastructure is needed in order to deliver the right mix of infrastrucuture and services, to develop applications on a continuous basis, and draw insights to make decisions from the data. For IT decision makers who must define their right mix of Hybrid IT across on-premises dedicated and cloud environments, as well as hosted cloud, a new compute experience is required to obtain cloud economics and agility, with the security of an on-premises data center.

HPE ProLiant Gen10 Servers are designed to simplify Hybrid IT by providing the agility of a modernized infrastructure, the security to protect digital assets, and the economic control to pay for only what is used.

Security to protect digital assets: A better way to protect businesses and their valuable data with an infrastructure that has security designed in from the start.

Economic control for the bottom line: A better way to consume IT that allows customers to pay for only what they use, scaling on demand without overprovisioning or incurring exponentially escalating costs. 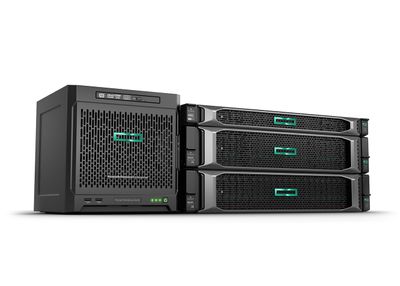 The Gen10 DL family of servers are the most flexible, reliable, and performance-optimized ProLiant rack servers—ever. Integrated with a simplified and comprehensive management suite and industry-leading support, the ProLiant Gen10 rack portfolio delivers a more reliable, fast, and secure infrastructure solution, helps increase IT staff productivity, and accelerates service delivery. In addition, the rack portfolio is performance-optimized for multi-application workloads to significantly increase the speed of IT operations and enable IT to respond to business needs of any size, faster.

**BONUS: Be sure to check out, "A Storage Guy Talking About New ProLiant Gen10 Servers" in which HPEStorageGuy, Calvin Zito, gives you a closer look at what's inside these new powerful and flexible rack servers.