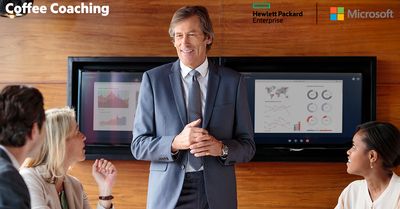 Why Windows Server 2016?
Microsoft Windows Server 2016 is a scalable and adaptive operating system designed to support workloads of all sizes, provide enterprise level security for IT infrastructure, and enable cloud migration at the businesses own pace. By combining new layers of security with advanced features to improve productivity and efficiency, it delivers powerful innovations that enable customers to use their applications and infrastructure to transform their business.

Why HPE OEM Windows Server 2016
HPE OEM Microsoft Windows Server 2016 licenses are some of the simplest, most cost-effective licensing options for many small and midsize businesses. The Operating System (OS) and drivers are pre-tested and optimized for HPE Servers AND they are supported by HPE. This gives your clients a one-stop-shop for support—customers who purchase an HPE OEM Microsoft OS from HPE or HPE Resellers can call HPE for both OS and server support. . In addition, HPE OEM Windows Server licenses offer the same downgrade and virtual machine portability rights as with Volume Licensing and select SKUS offer license reassignment rights to other servers.

Why HPE OEM Windows Server Reseller Option Kit (ROK)?
HPE sells Microsoft Server licenses in a number of ways. To ensure customers purchase the right HPE ProLiant server with the right Windows Server edition, HPE developed the HPE OEM Microsoft Windows Server Reseller Option Kit (ROK) that delivers, through reseller partners, value pricing, flexible choices, one-stop ordering, and single source support to help businesses be more productive, achieve more with their investment, and keep everything running smoothly. When your customers purchase a new HPE Server, you (our wonderful resellers) can preinstall the Windows Server OS they choose to deliver a solution that is entirely customized to their needs and immediately ready to use. Learn more about HPE ROK.

Why HPE OEM Windows Server 2016 ROK on HPE ProLiant Servers?
HPE offers an industry leading line of ProLiant Servers. From SMB to large enterprise, there is a ProLiant Server that is just right to help meet business demands, increase agility and flexibility, reduce cost, and increase efficiency. HPE and Microsoft's partnership means there are 30+ years of joint engineering software and hardware- HPE hardware is optimized for Microsoft technologies and hybrid infrastructures and vice-versa.