I have HPE 3PAR Storage news to share with you today around AI and cloud automation. Beth Joseph recently shared a blog post about our vision for Intelligent Storage. The news today builds on that vision.

As a quick summary, Intelligent Storage is storage that is predictive, cloud ready, and timeless. And we've talked about those pillars of our POV in a previous blog posts, podcasts, and a ChalkTalk. We like putting information into buckets so that we can classify and remember it - the news today fits into the predictive and cloud ready pillars of our POV.

As is the case, I'll provide a high-level overview and later in the week I'll have subject matter experts with additional blog articles going deeper. In this post, I'll also share a new 3PAR portfolio overview ChalkTalk. So let's get to the news. 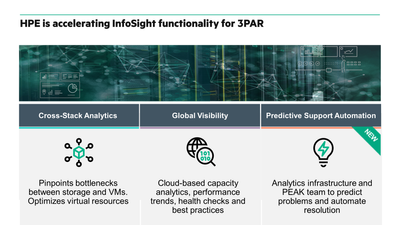 This is really exciting stuff! I've said several times that HPE InfoSight is like pixie dust for data center infrastructure. The results that Nimble Storage achieved with it before we acquired them and now what we are doing applying that super-charged AI engine to other products in the HPE portfolio starting with 3PAR are awesome.

We announced HPE InfoSight on 3PAR in November 2017. We focused on cross-stack capabilities and using the telemetry data from systems around the globe. Today we are announcing the addition of predictive support automation.  What is this?

In just a few short months, the results we've seen from the predictive support automation have been impressive. HPE InfoSight has enabled an 85% prediction and auto-resolution for more than 1500 3PAR priority cases. And for that 15% that don’t get auto-closed, they get fast tracked to Level 3 (L3) support – so that means faster time resolution.

So 3PAR is getting more intelligent, getting better, and from what I saw with HPE Nimble Storage results over the last few years, 3PAR will get more reliable because  HPE InfoSight is constantly learning from the huge 3PAR install base.

A peak inside the PEAK team

Both HPE Nimble Storage and 3PAR have teams focused on investigating the support cases, root cause analysis, and when appropriate creating "digital signatures" that are the key to case automation. That teams that do this are called PEAK - an acronym that came from Nimble Storage. PEAK stands for:  Productivity, Efficiency, Agility, Knowledge. The PEAK team is not just an escalation point or a tier of support but are focused on research and development to increase support efficiency.

There are a few people on the PEAK team that I have a personal connection with. My go to resource on the team is Wiley. I've known Wiley since 1999. When someone opens a support case with InfoSight, asking 3PAR questions, it likely starts with Wiley. I talk to him every couple of weeks to get a download of what's new and coming with 3PAR on InfoSight. And Wiley is in the middle of the QuickStart guide that I wrote about on our HPE Storage Tech Insiders blog.

And then there's Brandon. Brandon started on the 3PAR PEAK team  this spring - graduating from Biola University with a double major in CS and Math - a perfect combination for the PEAK team. He was a summer intern here in Boise on the 3PAR team a couple of years ago before he graduation. He met my daughter while at Biola and they were married in January 2017 and now have moved to Boise, so I'm a happy dad to have them close by.

Ivan Iannaccone, the VP and GM for HPE 3PAR has a blog post How the World's Best Artificial Intelligence Engine is Redfining HPE 3PAR that I highly recommend checking out.

We've been doing a lot of work to integration 3PAR into DevOps (container and container orchestration) environments.  Here's a summary of the enhancements (from the press release):

I have a video I did a few weeks ago at Discover with Srik, our cloud automation for 3PAR solution manager - and we hit on a lot of these topics so check out the video on YouTube. I hope to have a podcast with Srik where we'll dive even deeper into the topic.

While not 3PAR focused, I want to give a shout out to Michael Mattsson. Michael is on the HPE Nimble Storage technical marketing team and he has five blog posts this year over on HPE Storage Tech Insiders talking about what we're doing with HPE Nimble Storage for these DevOps environments. So if you're interested in DevOps and HPE Nimble Storage, check out those.

I said I had a new 3PAR portfolio overview ChalkTalk - 5 minutes of 3PAR goodness that I think is a good summary of the 3PAR family. Here it is.

The news went out a few hours ago and I wanted to point you to a few of the articles I've seen as well as the press release we issued. So here are a few links to get more information: