Advantages of VVol Storage Snapshots, and a word of caution about Memory Snapshots

One of the many benefits of VVols is that snapshots of a VVol VM are offloaded to the storage array. With HPE Nimble Storage arrays, you can create a large number of space-efficient snapshots and retain them for longer.

Unlike VM Snapshots on a VMFS datastore, VVol snapshots on Nimble do not have any impact on disk IO performance. No penalty on reads for a VM with any number of snapshots. And most importantly, no penalty for deleting the VM snapshots. The deletions are instantaneous. There is no snapshot consolidation process that needs to read the data from redo logs and write them to base disks!

You can also snapshot a VVol VM with the option "Snapshot the virtual machine's memory" selected. Such VMs can be restored to the powered on state it was in when the snapshot was taken. Without this option, the VMs would be restored to a powered off state. 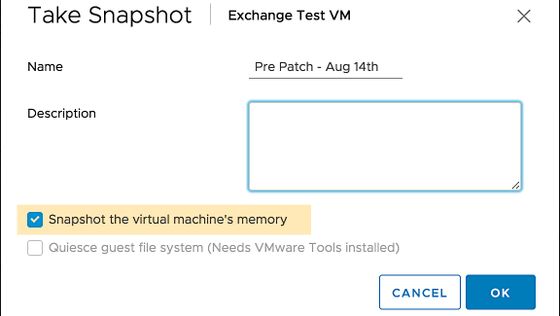 This is great, but …

"Snapshot the virtual machine's memory” does not use storage array snapshots. It uses a new VVol disk, and counts against the total number of VVol volumes supported by the storage array!

Let’s break this down a little more:

The VVol volumes are shown in the Nimble management UI, with the volume created for memory snapshots highlighted.

The Nimble volume created for holding the memory contents is Thick Provisioned, and typically all of the data in a RAM is in use, so entire contents are written to the storage volume.

Storage compression reduces the actual storage capacity used to a good extent, but YMMV. Average compression observed from InfoSight for VM memory VVols is around 4X. If multiple such VM snapshots are created, a new volume is created for each memory snapshot.

Usage and savings on a memory snapshot VVolIn conclusion, for VVol VM deployments:

It is advisable not to select "Snapshot the virtual machine's memory” as a default option for all VM snapshots. Use them sparingly when absolutely necessary.