An explanation of IOPS and latency

(cross-posted at my recoverymonkey.org blog)

I understand this extremely long post is redundant for seasoned storage performance pros – however, these subjects come up so frequently, that I felt compelled to write something. Plus, even the seasoned pros don’t seem to get it sometimes…

IOPS: Possibly the most common measure of storage system performance.

IOPS means Input/Output (operations) Per Second. Seems straightforward. A measure of work vs time (not the same as MB/s, which is actually easier to understand – simply, MegaBytes per Second).

How many of you have seen storage vendors extolling the virtues of their storage by using large IOPS numbers to illustrate a performance advantage?

How many of you decide on storage purchases and base your decisions on those numbers?

However: how many times has a vendor actually specified what they mean when they utter “IOPS”?

For the impatient, I’ll say this: IOPS numbers by themselves are meaningless and should be treated as such. Without additional metrics such as latency, read vs write % and I/O size (to name a few), an IOPS number is useless.

And now, let’s elaborate… (and, as a refresher regarding the perils of ignoring such things when it comes to sizing, you can always go back here).

On a small system with under 100 standard 15K RPM spinning disks, a certain three-letter vendor was claiming half a million IOPS. Another, a million. Of course, my customer was impressed, since that was far, far higher than the number I was providing. But what’s reality?

Here, I’ll do one right now: a single SSD can do a million IOPS. Maybe even two million.

It’s impossible, since there is no standard way to measure IOPS, and the official definition of IOPS (operations per second) does not specify certain extremely important parameters. By doing any sort of I/O test on the box, you are automatically imposing your benchmark’s definition of IOPS for that specific test.

What’s an operation? What kind of operations are there?

It can get complicated.

An I/O operation is simply some kind of work the disk subsystem has to do at the request of a host and/or some internal process. Typically a read or a write, with sub-categories (for instance read, re-read, write, re-write, random, sequential) and a size.

Depending on the operation, its size could range anywhere from bytes to kilobytes to several megabytes.

…this could go on. As you can see, there’s a large variety of I/O types, and true multi-host I/O is almost never of a single type. Virtualization further mixes up the I/O patterns, too.

Now here comes the biggest point (if you can remember one thing from this post, this should be it): No storage system can do the same maximum number of IOPS irrespective of I/O type, latency and size.

Let’s re-iterate: It is impossible for a storage system to sustain the same peak IOPS number when presented with different I/O types and latency requirements.

Another way to see the limitation…

A gross oversimplification might help prove the point that the type and size of operation you do matters when it comes to IOPS. Meaning that a system that can do a million 512-byte IOPS can’t necessarily do a million 256K IOPS.

The bucket ultimately contains about the same volume of stuff either way, and the volume is the major limiting factor. Clearly, you can’t completely fill that same container with the same number of large spheres as you can with small spheres.

So, we’ve established that not all IOPS are the same – but what is of far more significance is latency as it relates to the IOPS.

If you want to read no further – never accept an IOPS number that doesn’t come with latency figures, in addition to the I/O sizes and read/write percentages.

Simply speaking, latency is a measure of how long it takes for a single I/O request to happen from the application’s viewpoint.

In general, when it comes to data storage, high latency is just about the least desirable trait, right up there with poor reliability.

A delay in the DB will make the web front-end also delay, and the company could well lose thousands of customers and millions of dollars while the delay is happening. Some companies could also face penalties if they cannot meet certain SLAs.

On the other hand, applications doing sequential, throughput-driven I/O (like backup or archival) are nowhere near as sensitive to latency (and typically don’t need high IOPS anyway, but rather need high MB/s).

It follows that not all I/O sizes and I/O operations are subject to the same latency requirements.

Here’s an example from an Oracle DB – a system doing about 15,000 IOPS at 25ms latency. Doing more IOPS would be nice but the DB needs the latency to go a lot lower in order to see significantly improved performance – notice the increased IO waits and latency, and that the top event causing the system to wait is I/O: 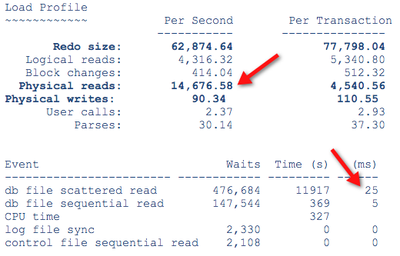 Now compare to this system (different format for this data but you’ll get the point):

Notice that, in this case, the system is waiting primarily for CPU, not storage.

A significant amount of I/O wait is a good way to determine if storage is an issue (there can be other latencies outside the storage of course – CPU and network are a couple of usual suspects). Even with good latencies, if you see a lot of I/O waits it means that the application would like faster speeds from the storage system. But this post is not meant to be a DB sizing class.

Here’s the important bit that I think is confusing a lot of people and is allowing vendors to get away with unrealistic performance numbers:

It is possible (but not desirable) to have high IOPS and high latency simultaneously.

How? Here’s a, once again, oversimplified example:Imagine 2 different cars, both with a top speed of 150mph.

The maximum speed of the two cars is identical.

Does anyone have any doubt as to which car is actually faster? Car #1 indeed feels about 4 times faster than Car #2, even though they both hit the exact same top speed in the end.

Let’s take it an important step further, keeping the car analogy since it’s very relatable to most people (but mostly because I like cars):

In this example, Car #2 actually has a much higher top speed than Car #1. Many people, looking at just the top speed, might conclude it’s the faster car.

Car #2 continues to accelerate (and, eventually, overtakes Car #1), but takes an inordinately long amount of time to hit its top speed of 180mph.

Again – which car do you think would feel faster to its driver?

You know – the feeling of pushing the gas pedal and the car immediately responding with extra speed that can be felt? Without a large delay in that happening?

Which car would get more real-world chances of reaching high speeds in a timely fashion? For instance, overtaking someone quickly and safely?

(I fully expect fellow geeks to break out the slide rules and try to prove the numbers wrong, probably factoring in gearing, wind and rolling resistance – it’s just an example to illustrate the difference between throughput and latency, I had no specific cars in mind… really).

And, finally, some more storage-related examples…

Some vendor claims… and the fine print explaining the more plausible scenario beneath each claim:

Notice how none of these claims are talking about writes or working set sizes… or the configuration required to support the claim.

Audited validation and a specific workload to be measured against (that includes latency as a metric) both help. I’ll pick on HDS since they habitually show crazy numbers in marketing literature.

For example, from their website: (link may or may not be live when you read this, hence the screenshot) 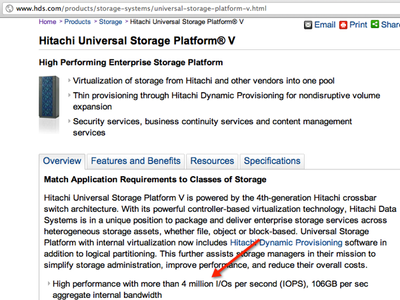 It’s pretty much the textbook case of unqualified IOPS claims. No information as to the I/O size, reads vs writes, sequential or random, what type of medium the IOPS are coming from, or, of course, the latency…

Where are the IOPS coming from?

So, when you hear those big numbers, where are they really coming from? Are they just ficticious? Not necessarily. So far, here are just a few of the ways I’ve seen vendors claim IOPS prowess:

The figures provided by the approaches above are all real, in the context of how the test was done by each vendor and how they define “IOPS”. However, of the (non-exhaustive) options above, which one do you think is the more realistic when it comes to dealing with real application data?

What if someone proves to you a big IOPS number at a PoC or demo?

But, as with everything, garbage in – garbage out.

If someone shows you IOmeter doing crazy IOPS, use the information in this post to help you at least find out what the exact configuration of the benchmark is. What’s the block size, is it random, sequential, a mix, how many hosts are doing I/O, the concurrency, etc. Is the speed all coming out of RAM?

Typically, things like IOmeter can be a good demo but that doesn’t mean the combined I/O of all your applications’ performance follows the same parameters, nor does it mean the few servers hitting the storage at the demo are representative of your server farm with 100x the number of servers. Testing with as close to your application workload as possible is preferred. Don’t assume you can extrapolate – systems don’t always scale linearly.

In real life, you typically won’t have a single host pumping I/O into a storage array. More likely, you will have many hosts doing I/O in parallel. Here are just some of the factors that can affect storage system performance in a major way:

What you can do to get a solution that will work…

You should work with your storage vendor to figure out, at a minimum, the items in the following list, and, after you’ve done so, go through the sizing with them and see the sizing tools being used in front of you. (You can also refer to this guide).

If your vendor is unwilling or unable to do this type of work, or, especially, if they tell you it doesn’t matter and that their box will deliver umpteen billion IOPS – well, at least now you know better.

Dimitris Does What Needs to Be Done at HPE. He contributes to HPE’s strategy, product and process enhancements and product launches, as well as speaking at industry events and helping customers. Sometimes janitorial duties.