In this ATSB article, I want to share the latest Chalk Talk that focuses on the value proposition and answers the question, what's the big deal about HPE Nimble Storage. 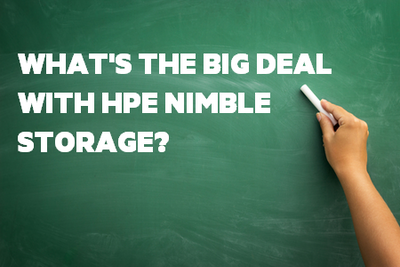 Back in May 2017, shortly after HPE acquired Nimble Storage, I did a Chalk Talk to explain the value of Nimble. About a year later, we announced the next generation of HPE Nimble Storage and I did another Chalk Talk looking at the portfolio, really focused on the things that we were doing with the product family. If you don't know the family of products, check out that Chalk Talk titled "New HPE Nimble Storage Chalk Talk".

In this ATSB article, I want to share the latest Chalk Talk that focuses on the value proposition and answers the question, what's the big deal about HPE Nimble Storage. This video focuses on three things that we've been talking about since we brought Nimble Storage into HPE Storage. I briefly highlight what they are and leave the details for you to watch in the Chalk Talk:

So without further ado, here's the new HPE Nimble Storage Chalk Talk that will help you understand what the big deal is.

I think one of the things people like about my Chalk Talks is it takes a complex topic and in about 5 minutes, makes it easy to understand. So let me share a few more related Chalk Talks that are relevant to HPE Nimble Storage:

About The Storage Godfather (formerly HPEStorageGuy)

I'm Calvin Zito and November 2019 marked 36 years with HP/HPE. I've worked in HPE Storage since 1990. I was recently recognized as a 10 time VMware vExpert. As an early adopter of social media and active participant in communities, I've blogged for over 13 years. I'm also an avid Boise State fan - bummed that they won't be playing this fall! You can find me on Twitter as @CalvinZito. If you don't follow me on Twitter, please do it now! You can also contact me via email.