Confirmed once again: the power of 3PAR innovation in today’s storage market

has done with 3PAR these last five years. Before 3PAR, HP Storage was losing market share but now that has all changed. In this post, I wanted to review the latest Q2 2015 IDC Worldwide Quarterly Disk Storage Systems Tracker, talk about 3PAR history, with an emphasis on innovation since the acquisition.
Let me highlight a few things from the IDC Tracker1:

A moment to reflect on the storage industry—and the fate of startups
I was at VMworld last week. Among other things, it’s always interesting to walk the show floor and check out the vendor landscape. Over the last five years, VMworld has become a storage show where every storage vendor, even some who come and go in the span of a year, show up with a booth.


This made me wonder if there was data out there about how many of the storage startups will be left standing. According to Forbes, 90% of tech startups fail. 90%! That surprised me. Of the VMworld sponsors this year (Diamond through to Bronze), I counted 34 vendors focused on storage in startup mode, (and of course not including the top five—HP, EMC, Dell, IBM, NetApp and I'll include HDS). If I apply that 90% to those 34 startup vendors at VMworld, four will survive. Four!

A 3PAR history lesson
3PAR Inc. was a unique exception built on unique innovation. 3PAR was founded in 1999. The first product shipped was in September 2002. By 2007, they completed an initial public offering (IPO) and by 2008 were listed on the NYSE Big Board. Having talked to some of my colleagues that came from 3PAR, there were some lean years as CEO David Scott led the company through two separate economic downturns. However the intersection of 3PAR with virtualization and IT-as-a-Service resulted in it being one of a small number of storage companies that made it through the rain.

Innovation was a core tenant at 3PAR. The core of 3PAR was based on an “active-mesh” architecture, system–wide striping, fine grain virtualization, advanced metadata handling and system-wide sparing 3PAR pioneered thin provisioning and arguably it’s still the best in the industry. 3PAR, before being acquired by HP, also introduced Virtual Domains multi-tenant security, and Adaptive Optimization auto-tiering.

HP announced our intent to acquire 3PAR five years ago and closed the acquisition in September 2010. There was a lot of press coverage because of the highly visible bidding war. It was a very bold step at the time and based on the IDC results, it clearly has paid off. I wanted to look back on these five years with a focus on innovations.

But wait, that’s not all!
In late August, we made another significant enhancement to the HP 3PAR family – introducing the 8000 series. Our new 3PAR 8000 family consists of four different models, all able to start in a small 2u form factor. And all are powered by the same flash-optimized architecture. This means any 8000 model can deliver all-flash performance. Three numbers that sum it up: 1 million, 19,000 and 5.5. What do these mean?

So now the entire 3PAR StoreServ family has been refreshed and here is what the new family looks like. 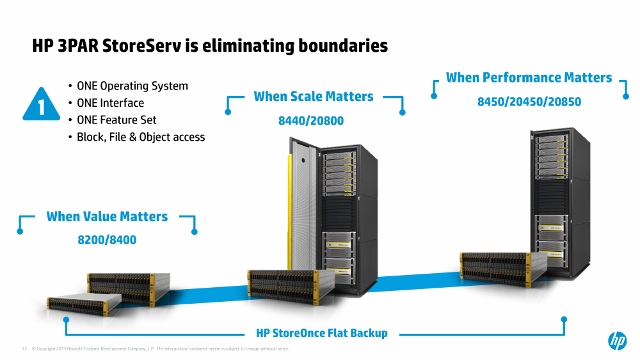 It’s been quite a run for HP Storage over the last five years. I’ve talked about my excitement at what we’ve done. But what does the future hold? Recently I interviewed Dave Vellante from Wikibon and I think our conversation is a really good summary of my point of view. We even touched on the topic of all the startups in the industry. If you haven’t seen, I think it’s a great discussion (and I had a ton of fun). Here’s a link to it on YouTube.

Here are a few sources of more information that I think you’ll find useful:

I'm Calvin Zito, a 33 year veteran in the IT industry and have worked in storage for 25 years. I have been a VMware vExpert for 5 years. As an early adopter of social media and active in communities, I've blogged for 7 years. I started my "social persona" as HPStorageGuy but with the coming HP separation, you can find me on Twitter as @CalvinZito. You can also contact me via email.

I went to the HP 3PAR Roadshow in 2011. It was a very signifigant event for me. HPE 3PAR StorServ is the best and the product line continuosly gets better.