After a successful beta program with both external and internal customers, Hewlett Packard Enterprise is now marking the HPE CSI (Container Storage Interface) Driver for Kubernetes version 1.0.0 Generally Available (GA) for immediate use. Delivery mechanisms include a Helm chart and manual install through YAML declarations available on GitHub.

The HPE CSI Driver is a multi-vendor and multi-backend CSI driver where each implementation has a Container Storage Provider (CSP). In 1.0.0, HPE only supports HPE Nimble Storage but more products are on the roadmap, such as HPE 3PAR, HPE Primera and HPE Cloud Volumes. Stay tuned for future updates!

The HPE CSI Driver allows any vendor or project to develop its own Container Storage Provider by using the CSP specification available on the HPE DEV portal. This makes it very easy for 3rd parties to integrate their storage solution into Kubernetes as all of the intricacies are taken care of by the HPE CSI Driver. 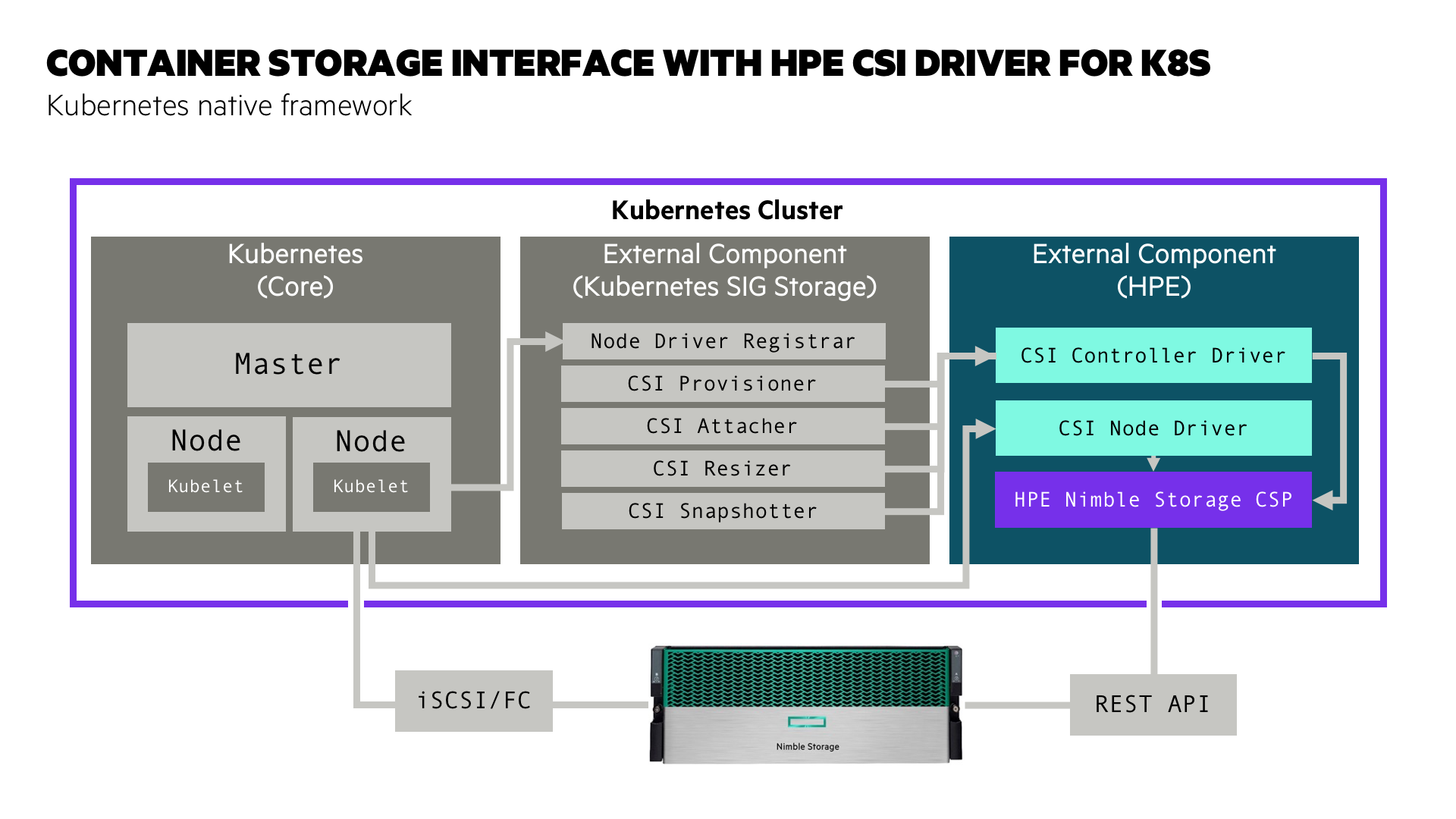 The CSI specification include constructs to manage snapshots as native Kubernetes objects and create new PVCs by referencing those objects. Other capabilities include PVC expansion, inline ephemeral volumes and the ability to present raw block storage to Pods.

Besides Dynamic Provisioning all additional features and capabilities are considered beta in Kubernetes. 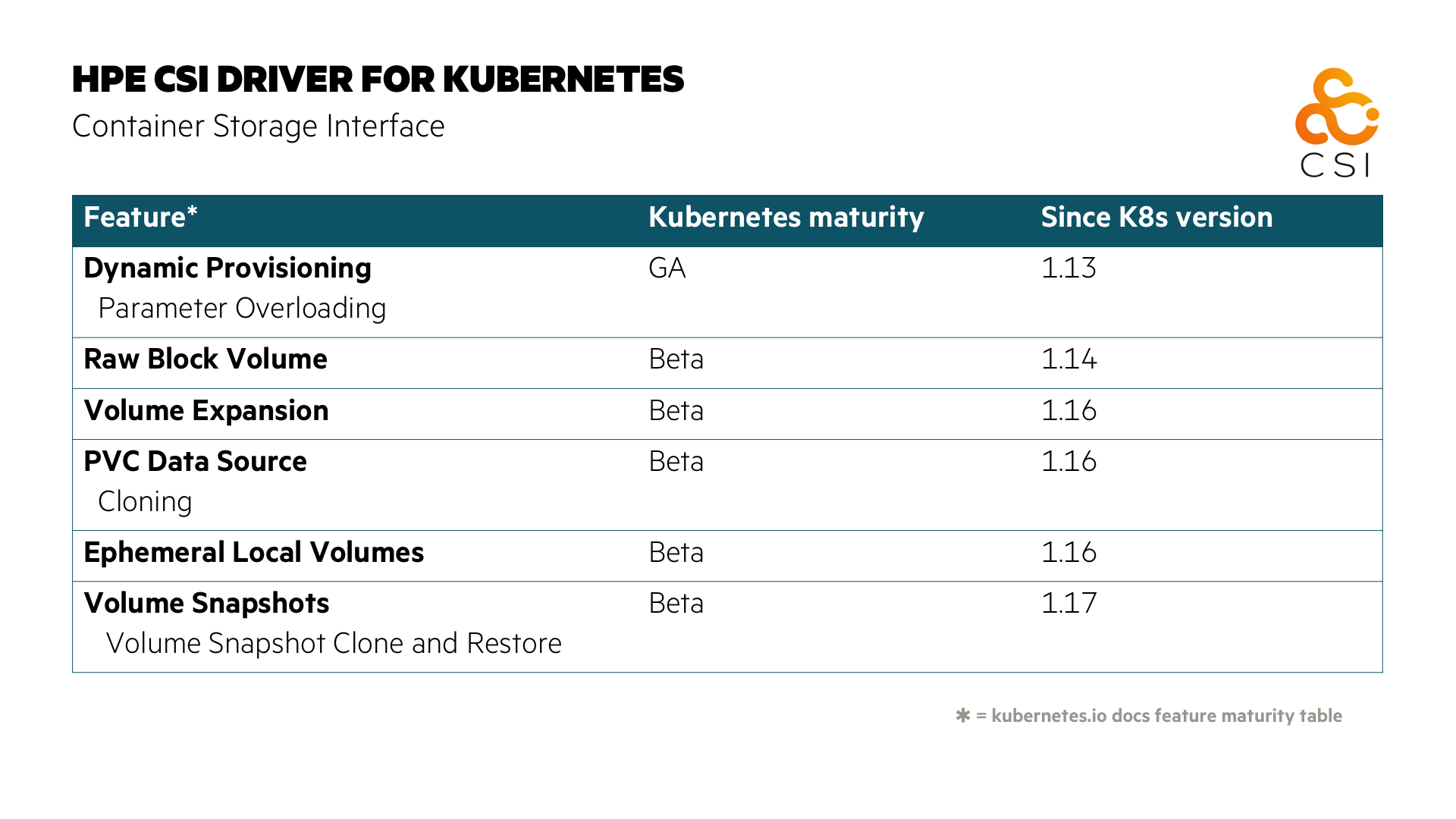 Note: The HPE CSI Driver supports the entire CSI specification. Kubernetes beta features are provided as-is and should be considered beta from the CSI driver perspective.

Demos made available through the beta program are still relevant and represents the CSI driver capabilities.

This video is an interview with the architect and a demo of the driver capabilities. Associated blog post is available on HPE DEV.

The CSI driver also supports an extensive list of provisioning parameters that carried over from the FlexVolume driver. Please see the the documentation on how to leverage StorageClass parameters and using PVC overrides.

The CSI driver supports Kubernetes 1.13 up to 1.17 on the most popular Linux operating systems and container runtimes. The table below highlights what have been tested and validated by the HPE Nimble Storage QA team. Partner Kubernetes distributions, such as Google Anthos on VMware vSphere, Rancher and Red Hat OpenShift (with caveat above) are also supported along with the HPE Container Platform being released later this year.

The HPE CSI Driver for Kubernetes is supported by your HPE storage support contract. Please engage with HPE support through the regular support channels.

Stay up-to-date by following the blogs on HPE Storage Tech Insiders for future updates on the HPE CSI Driver for Kubernetes. Please join us on the HPE DEV Slack community in #Kubernetes and #NimbleStorage if you have any immediate questions or want to talk shop. We’re here.