Building the case for LTO tape storage to weather coming storms and the data tsunami, creating more sustainable archival storage when and where it's needed most. 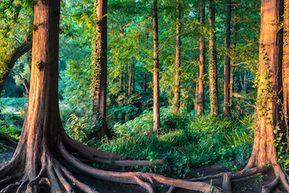 It’s pretty much universally accepted that climate change is accelerating both the frequency and ferocity of natural disasters and extreme weather events. Hurricane Michael, the storm that battered the southern United States during October 2018, was one of the most powerful events on record after rapidly growing in strength as it approached landfall. Scientists use the term “rapid intensification” (or RI) to describe a storm that increases its maximum sustained winds by at least 35mph within a 24-hour period. Last year there were 40 separate cases of RI—the most in at least 35 years.

What’s worrying from a societal point of view is that these stronger hurricanes and storms are more costly to recover from. Since 1980, the US alone has sustained over two hundred weather and climate disasters. According to the U.S. Department of Commerce National Oceanic and Atmospheric Administration During 2017, sixteen “one billion dollar” meteorological events have been added to the $1.5 trillion in cumulative costs since the end of the 1970s. Hurricanes Harvey, Maria and Irma alone cost the U.S. economy $265 billion in 2017.

So what does this mean for IT and storage in particular?

Climate will undoubtedly have an impact on IT and data storage trends in the decade to come. Set against the backdrop of climate change, data center power consumption is now a very real strategic consideration whose importance can only grow. In Ireland, for example, where the government has incentivised data center expansion by multi-national enterprises and service providers, these installations could soon account for 20% of Ireland’s entire national grid peak electricity requirements. In the U.S., data center energy consumption is predicted to rise from about 100 TWhr (1 TWhr = 1 trillion watts) in 2010 to around 600 TWhr by 2020. Demand is rising but so are the climate-associated risks to the consistent energy supplies upon which IT depends. We need more power for our data centers, but we also need to control energy demands—or generate supply from zero carbon sources on a scale that far outweighs current and likely near term provision. Something has to give. 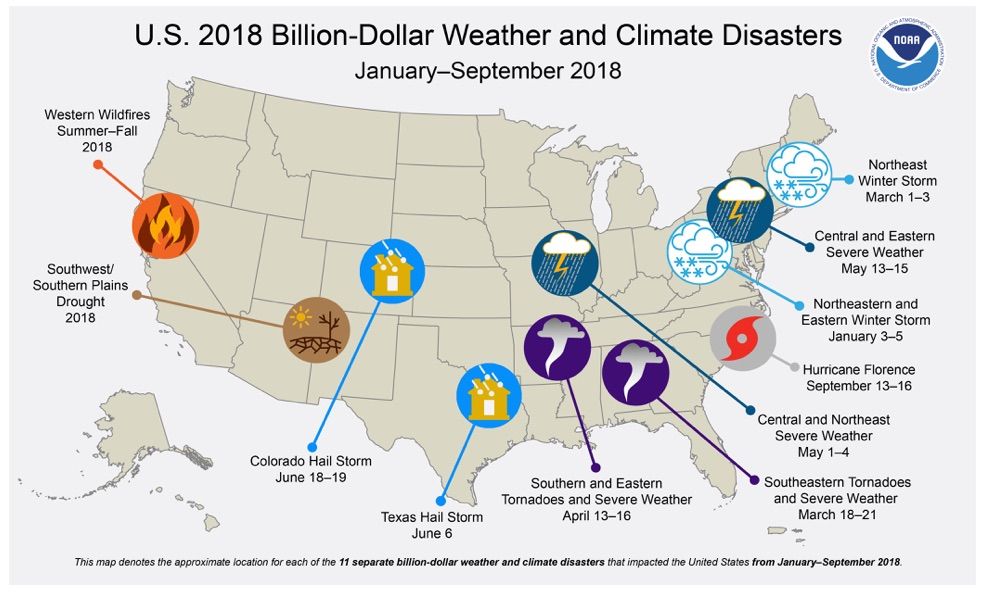 This presents a double challenge for storage architects, the industry and its customers. In the first instance, the data tsunami that will emerge thanks to trends like high-performance computing (HPC), mobility and the Internet of Things (IoT) will require vast amounts of storage. We are already seeing an emerging category of hyperscale data center being built (in places like Ireland) to accommodate the insatiable demand for compute and storage capability. But although the cloud and hybrid IT may appear to offer limitless, “always on, always available” resources, in reality, it seems increasingly obvious that such utility will come at an environmental cost. Building vast warehouses stuffed full of energy-intensive disk arrays will probably become a political, as much as a technical, barrier in the very near future. The cloud will have very clear limitations imposed by the necessity of reorganizing power and energy use to meet climate change goals.

One way this could be addressed is to reduce the need for so many devices. Increasing the areal density and efficiency of hard-disk drives (HDDs) would reduce their proliferation. Effectively this means storing more data in the same or smaller physical and energy footprint. But HDDs are approaching the superparamagnetic limit with no current breakthrough in sight that can increase their capacity potential. Thus, Information Storage Industry Consortium (INSIC) is predicting only a very modest CAGR of 15% for HDD areal density growth between now and 2025, which will see unit capacities rise from 15 TB to 40 TB. But in the same timeframe, raw data growth is expected to be about three times greater than this increase in disk drive capacity.  Vendors are offering a gentle ramp when a step change is required. The only way to address this dilemma is to erect bigger and bigger data centers, with more and more devices. But in my opinion, this is never going to be a tenable solution due to the political and environmental obstacles that will need to be overcome to deploy ever more energy-intensive IT. Every powered disk or object storage appliance will be constrained by the limitations of HDD areal density and the superparamagnetic limit.

So how else might we hollow out the deep data lakes on which future archival storage will depend? Simple. By using, or rather continuing to use, one of the oldest and most reliable of all storage technologies, which has recently been witnessing more capacity demand than ever before. And that would be tape, specifically LTO Ultrium tape storage.

To absorb the data growth rates of the “zettabyte era,” LTO tape still has plenty of R&D headroom. INSIC is forecasting a 33% CAGR in areal density which will catapult current tape capacities from 30 TB with LTO-8, to 480 TB by the time Generation 12 LTO appears towards the end of the next decade. A typical midrange library, like the HPE StoreEver MSL3040, that today has a maximum, fully loaded capacity of 8.4 PB using LTO-8 media, will be able to host an astonishing 134 PB with LTO-12, all within 21U or just half a traditional data center rack. Just 1 PB alone represents about 6.5 billion Facebook images.

But this is just scratching the surface of LTO tape’s true potential. The giant HPE TFinity Exascale with its current 53,000 tape, 1.6 Exabyte capacity might one day be able to hold 25 EB using LTO-12 cartridges—or the equivalent of 275 million 4K movies.

Crucially, all of the storage media (the tapes themselves) can be removed and safely stored offsite for decades if need be in a vault requiring minimal power or cooling. It’s these fundamental physical differences that make an almost insurmountable and unanswerable case for LTO tape storage to remain as the bedrock of our digital universe, especially in a world populated by billions of IoT devices. For the long-term preservation of essential, infrequently accessed data, it’s my opinion that there is is no other technology available that remotely comes close to matching the utility, cost, and environmental benefits of tape storage.

And the flipside benefit of a removable offline medium is that it can be transported around rapidly and easily without being dependent on infrastructure that might not be available after a major disruptive event. This gives businesses far greater control and flexibility in terms of disaster recovery (DR). The analyst Fred Moore from Horison Inc. has shown how a DR recall of 1 PB of data across a 185-mile distance (that's Chicago to Indianapolis in the U.S.) might take up to 31 hours using a dedicated 100 GbE link, whereas a truck carrying a small box of Ultrium tapes could make the journey well inside four hours.

With the likelihood that future DR scenarios might be juggling dozens or even hundreds of petabytes, the recovery time objective of restoring these vast datasets through the cloud will probably be impossible for all practical purposes, even with 200 GbE or even 400 GbE data pipes. Meanwhile, the same truck could still carry hundreds and hundreds of larger and larger capacity tapes, representing billions of files, in the same four-hour journey, giving your enterprise access to your entire archive during the period when speed of recovery is most important for business continuity. 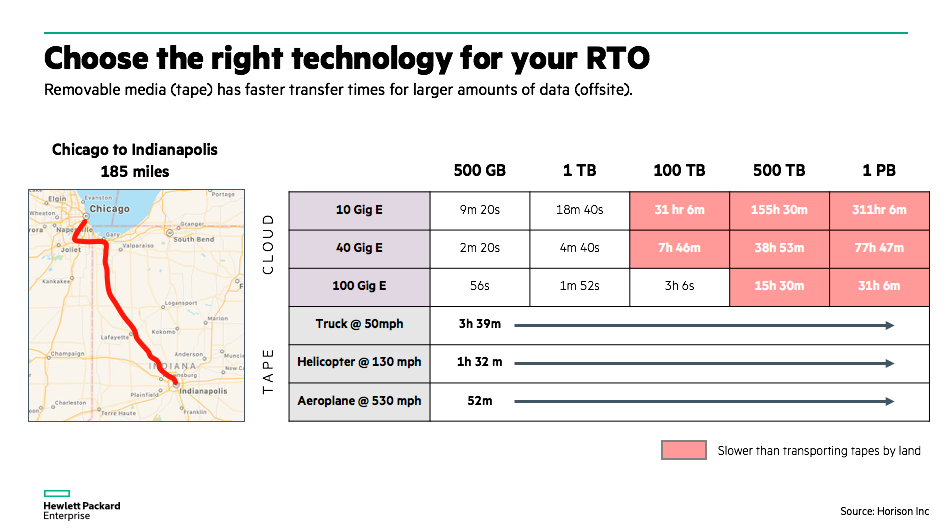 Please don’t misinterpret any of these points as a dismissal of the benefits of hybrid IT. There is nothing in tape’s key archival role that is incompatible with the vision of the enterprise as edge-centric, cloud-enabled, and data-driven. But sometimes it rains. And when it does, tape is a very effective umbrella.

The best way to use any storage technology—be it flash, disk, cloud, or tape—is to use the right media for the right purpose at the right time. As we head into a challenging period of history, attempting to become less dependent on fossil fuels, LTO tape not only will help us create more sustainable archival storage environments for massive data lakes, but allow us to rebound more quickly when disruptive events, whether climate-related or not, occur. Not only the right media for the right purpose, but a technology whose time has definitely come.