Technical Marketing Engineering has a preview of the new and exciting stuff the engineering team is developing as the product is built. The last couple of months my team was focused on getting the HPE SimpliVity 2600 platform complete, and the team was all happy to see the new platform launched last week.

Over the years, the HPE SimpliVity Data Virtualization Platform has been only offered in a 2U rackmount form factor server platform. Since the acquisition of SimpliVity by HPE back in early 2017, HPE has continued that form factor by extending support of the Data Virtualization Platform to the HPE ProLiant DL380 Gen9 and Gen10, the industry-leading server platform. Now, to meet customer demand for a denser solution, HPE is expanding its hyperconverged infrastructure portfolio to include the HPE SimpliVity 2600, based on the HPE Apollo 2600 platform. 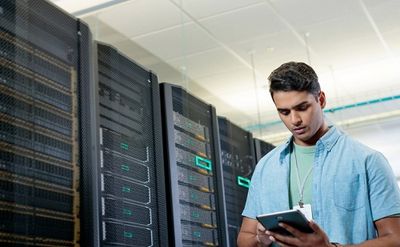 The primary constraint in getting HPE SimpliVity hyperconverged infrastructure into a dense form factor has been the inclusion of the HPE OmniStack Accelerator Card (OAC). There simply wasn’t space for it in a 2U multinode server chassis. HPE got over that hurdle by developing a software-only, fully optimized solution for data efficiency that replaces the OAC in dense platforms where it doesn’t fit. Countless hours of engineering effort have been put into the software-only version of the HPE SimpliVity platform to ensure that customers are still able to realize the full benefits of the Data Virtualization Platform without compromising on performance.

The initial version of the HPE SimpliVity 2600 platform is focused on VDI as its major use case with others to follow. As with previous releases, HPE successfully completed the Login VSI validation process, with this being the fourth validated solution produced. Check out the levels of consolidation with performance achieved on the Login VSI website. This increased density comes with zero sacrifices – all the features and functionality customers have benefitted from over the years with the HPE SimpliVity DVP are provided on this new platform. Lots of credit goes to the HPE engineering team for the awesome optimizations they implemented in the SimpliVity software which enables the team to fully meet customers’ demands without compromise.

As part of this launch, the team has performed exhaustive performance testing and analysis, with the conclusion of that process being a technical white paper that was just released. This white paper showcases the ability of the HPE SimpliVity 2600, supporting blocks of 700 and 1000 knowledge worker users, to provide excellent levels of consolidation while maintaining levels of performance end users demand. HPE SimpliVity customers will also be happy to see that the team achieved great results from the LoginVSI testing, as usual – like I said before, no compromise!

HPE SimpliVity 2600 is 100% software-optimized and rack-dense, making it a compelling new option for VDI.

This new hyperconverged solution is an ideal choice for customers such as these, who need dense compute with moderate storage:

This is just the beginning in the journey to extend the Data Virtualization Platform beyond 2U platforms, giving customers their choice of platforms without compromising on the features and functionalities provided by HPE SimpliVity.

Read more about hyperconvergence for end user computing in the Gorilla Guide to Hyperconverged Infrastructure for VDI.