I am happy to share with you that independent analyst firm DCIG has once again ranked HPE StoreOnce in the top category of “Recommended” in its just-released 2019-2020 Enterprise Deduplication Backup Target Appliance Buyer's Guide. 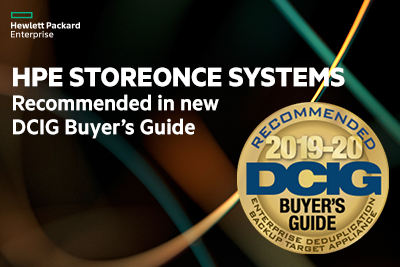 HPE is the only vendor in the guide to have its full portfolio of next-generation data protection appliances (including the HPE StoreOnce 5650, 5250, 5200, 3640, and 3620 models) top the evaluation criteria and earn the ranking “Recommended."

According to DCIG, a key reason for HPE StoreOnce topping the charts is because it enables enterprises to meet their broader, more strategic objectives. As an example, the report cites StoreOnce’s ability to perform next-generation data lifecycle management while at the same time providing the necessary features to accomplish traditional backup and recovery tasks.

The DCIG report positions HPE StoreOnce as best in class for “enterprises actively working toward creating a software-defined data center and wanting to automate seamless data movement between storage systems, deduplication appliances and the cloud so they can continue to build toward an intelligent data center.”

The report also states that “HPE has been the primary vendor leading in the innovation of these two areas,” citing HPE StoreOnce VSA, HPE Cloud Bank Storage and HPE RMC as major proof points.

You can read the complete DCIG report but let me summarize some of the stand-out quotes from an HPE StoreOnce perspective.

Catch the Around the Storage Block podcast hosted by Calvin Zito where I join Jerome Wendt, President and Founder, DCIG, to talk about the process behind the buyer’s guides and how HPE StoreOnce earned its “Recommended” rating. (Note the podcast will open in a new window. To subscribe to the podcast on iTunes, open this link and click on the "View in iTunes" button. You can also find the ATSB podcast on TalkShoe.com, Google Play Music, Spotify Podcast, and Stitcher. )

Find out more about HPE StoreOnce

Learn more about how StoreOnce can help you reduce cost, risk, and complexity with flash-speed protection in your data center, as well as low-cost archive and disaster recovery in the cloud. This video is a good place to start:

Then dig deeper with more StoreOnce content, including learning what else DCIG and the Taneja Group have to say about this next generation of hybrid cloud data protection: