Recently at Nth Symposium, I did a video with Qumulo CEO Bill Richter. It's my first ever CEO video so I was excited. So excited that I messed up and didn't record the audio. Bill was gracious enough to do a remote podcast so that's what I 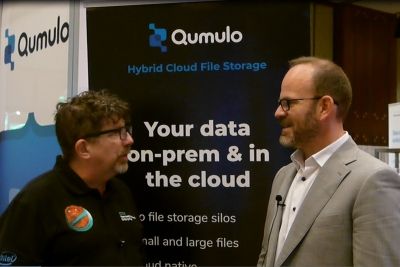 want to share with you today. Since we could go deeper in the podcast than we did in the 2 1/2 minute video, it wasn't a total loss!

In the podcast, Bill shares what the core Qumulo values are:

Qumulo started as an HPE Complete partner but has made the jump to an OEM partner. We now have Qumulo on HPE Apollo Gen10 servers and Bill and I discuss that along with why partnering with HPE has been very good for customers.

To subscribe to the podcast, open this link and click on the "View in iTunes" button under my picture. If you don't use iTunes, you can find my podcast on TalkShoe.com, Google Play Music. and just added to Spotify Podcast, and Stitcher!  On Google, you'll get "invited" to try Google Play Music for 30 days - just click "no thanks" to get past this and get to the podcast.

After I published this podcast with Bill, I was able to get a demo of Qumulo with Jeff Austin, a senior systems engineer with Qumulo. I like having demos to bring a solution to life and I think this demo that Jeff did for me does that.

Get more on HPE and Qumulo

I mentioned that we now support HPE Apollo Gen10 with Qumulo. Qumulo recently did a press release and there is more you can get if this is something you're looking at.

About HPE Storage Guy (aka The Storage Godfather)

I'm Calvin Zito and November 16, 2018 marked 35 years with HP/HPE. I was recognized as a 9 time VMware vExpert. As an early adopter of social media and active in communities, I've blogged for over 10 years. I'm also an avid Boise State fan. You can find me on Twitter as @CalvinZito. If you don't follow me on Twitter, please do it now! You can also contact me via email.