Hyperconverged infrastructure (HCI) has evolved quickly over the past four years. Vendors that did little more than pack servers, software-defined storage, and a hypervisor into a single chassis for Dev/Ops environments back in 2015 now provide sophisticated, fully automated hyperconverged solutions that can keep up with some of the most rigorous production workloads. IT organizations have evolved, too, from data maintenance centers with hardware-filled closets less than a decade ago to rack-dense, software-defined profit centers today. Throughout this technology journey, Hewlett Packard Enterprise has been driving HCI innovation to support your digital transformation. 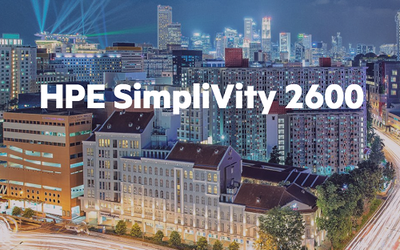 You might remember that HPE introduced the first highly dense, software-optimized offering in the HCI portfolio back in July: the HPE SimpliVity 2600. This HPE SimpliVity solution powered by Intel® packs two to four individual server nodes into each 2U chassis. The compact hyperconverged appliance, based on the HPE Apollo 2600 platform, is a compelling option for space-constrained environments. Initially engineered to support VDI workloads, the HPE SimpliVity 2600 takes advantage of software optimization for deduplication and compression, instead of leveraging hardware. In fact, HPE is the first vendor to deliver consistent performance with software enabled, always-on dedupe and compression – a feature that has been tested and validated by HPE and LoginVSI.

HPE hyperconverged infrastructure for general virtualization and the edge

HPE has now extended the HPE SimpliVity 2600 line to include models for general virtualization and remote offices, which are picking up an increasing share of the IT workload. No longer limited to remote brick and mortar offices, data centers at the edge include scientific labs in the wilderness, dispersed manufacturing sites, and IT closets on cruise ships. The HPE SimpliVity 2600 is ideal for environments like these, where you need dense compute with moderate storage, but have limited data center space.

The new hyperconverged appliances give you all of the same features and benefits that you find in other HPE SimpliVity models, from policy based, VM-centric management to built-in backup and disaster recovery features for data protection. Each HPE SimpliVity building block, known as a hyperconverged node, includes everything you need to run VMs. As your business grows or IT requirements change, you can simply add a node to scale the environment. Nodes can be added to clusters, and clusters can be added to federations, making management simple even at large scale.

Which brings me to a new feature for the HCI portfolio: mixed federations. IT administrators can now mix clusters within the same federation. For example, you might choose to populate the core data center with a cluster of HPE SimpliVity 380 nodes, and opt for space-saving HPE SimpliVity 2600 nodes at the edge. Or the other way around. These models can now reside in the same federation.

No matter which model you choose, HPE SimpliVity hyperconverged solutions deliver a complete set of advanced functionalities that enable dramatic improvements to the efficiency, management, protection, and performance of your virtualized workloads at a fraction of the cost and complexity of traditional infrastructure.

Take the next step toward implementing hyperconvergence in your data center. Download the Gorilla Guide to Hyperconverged Infrastructure Implementation. Or join us for an HPE SimpliVity overview and see a product demo at hpe.com/simplivity/webinar