Earlier this year our CEO Antonio Neri announced the availability of “True Hybrid Cloud for Containers”. The overarching message may have seemed exclusive to Google Anthos, but the foundational technology to infuse that message is actually HPE storage integration with Kubernetes. Multicloud flexibility with consistent data services enabled by HPE Nimble Storage and HPE Cloud Volumes Block. We’re excited by the fact that the HPE Container Platform will be able to take advantage of these capabilities out of the gate.

Kubernetes in its purest form

One of the foundational capabilities of HPE Container Platform is the fact that it uses vanilla upstream Kubernetes to bootstrap the clusters. Including multiple versions! That allows customers the choice of picking a certain version of Kubernetes that their infrastructure and workloads are certified against and they’ll run without modification or customization. As a seasoned Kubernetes user you’ve most likely been burned by the fact that you’ve been using a certain PaaS based on Kubernetes, only to find out later that the PaaS has made changes to Kubernetes that breaks the compatibility of your workload. This is NOT the case with HPE Container Platform. Another strength is that we are using standard CentOS or RHEL as the base operating system which further broadens the adoption with standard operating practices within the Enterprise.

One of the most prominent use cases for containers and persistent storage is the ability to integrate data in CI/CD pipeline irrelevant to what preference and where the toolchain is running. HPE Container Platform will ship with prepackaged CI/CD tooling in its App Store but many times developers has a cloud preference more than anything else. This week at KubeCon we’ll demonstrate the ability to integrate data from an on premises application into a cloud native CI/CD pipeline using AWS CodePipeline using Amazon EKS managed by HPE Container Platform. 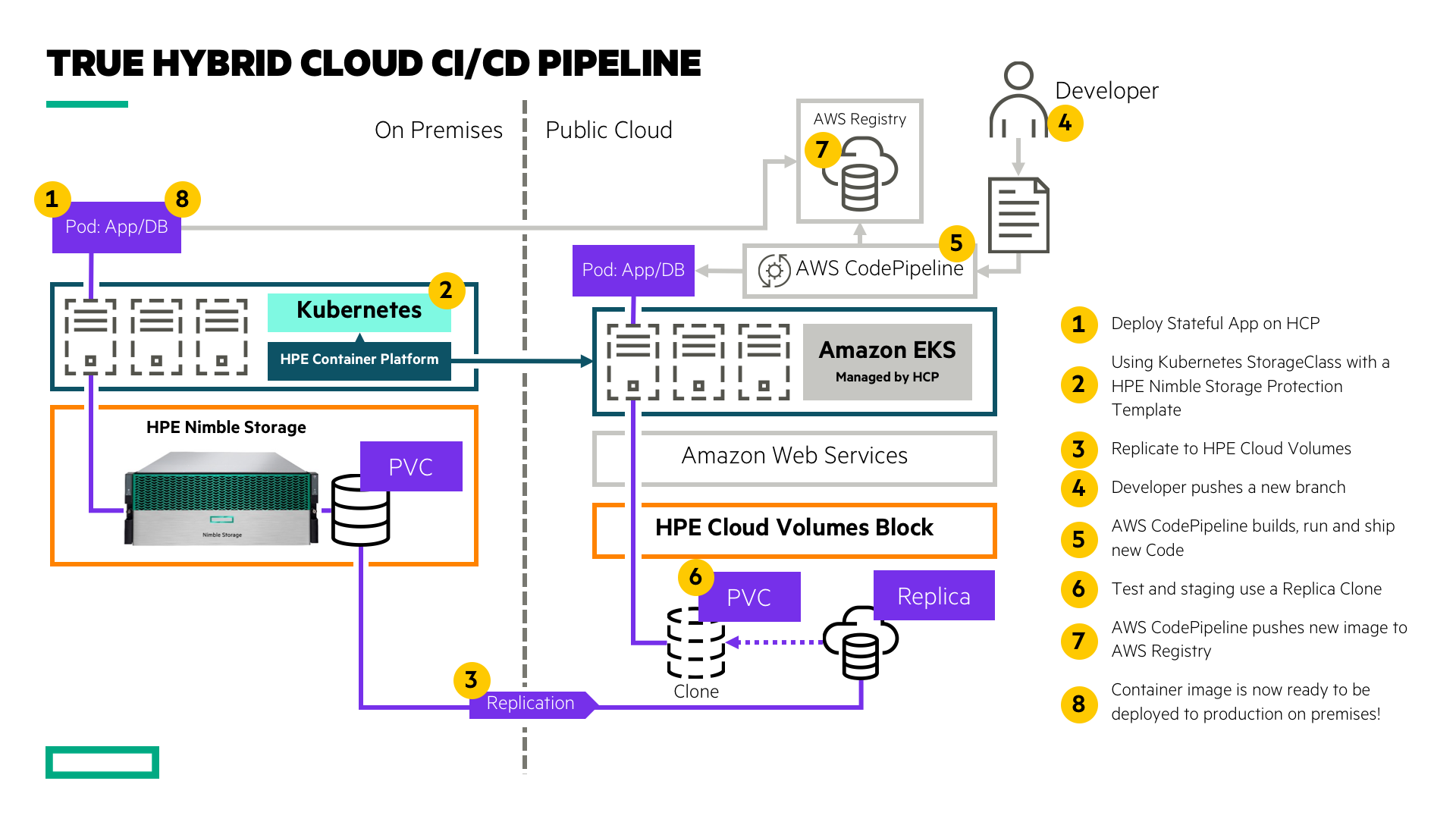 The demo walks through deploying the application on premises using a tenant on HPE Container Platform. The application leverages a Persistent Volume Claim (PVC) using a Kubernetes StorageClass backed by HPE Nimble Storage. The StorageClass references a Protection Template associated with a Replication Store on HPE Cloud Volumes. After initial deployment you’ll end up with a Replica Volume in the HPE Cloud Volumes portal that we later integrate with the AWS CodePipeline which at the end of the build, deploys and tests the application on Amazon EKS. On EKS, we leverage the exact same HPE Volume Driver for Kubernetes FlexVolume Plugin to import the Replica Volume which transforms it to a Replica Clone which allows us to perform tests without disrupting the replication relationship. A Replica Clone consumes no space until written to and the cloning operation itself does not involve any copying of data as if it would with traditional Amazon EBS where snapshots are backed by Amazon S3 objects hydrated back to EBS.

At the end of a successful build, a tenant DevOps engineer may grab the Amazon ECR (Elastic Container Registry) image and deploy on premises at will. This step could also be fully automated. Watch this space for more examples as we get closer to release.

This is just a glimpse of what is coming. Expect more intricate use cases and seamless integration of the primary storage portfolio with HPE Container Platform. Do stop by the HPE booth at KubeCon to learn more and talk shop. The HPE container storage experts are standing by to answer all your questions and discuss solutions from the HPE portfolio.

If you miss us at KubeCon, you also get the chance at Amazon re:Invent in Las Vegas December 2-6, 2019!