You can create a unified and secured environment for all of your AI workloads. 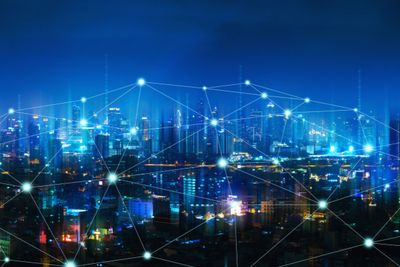 Supporting different AI/ML and analytics workloads, while also meeting the need of Data Analysts to securely access all the data using their preferred AI tools, is quite a challenging task for any IT manager or team. Many times, IT organizations find themselves addressing these needs using multiple clusters, or a combination of compute and storage resources. Unfortunately, such environments are complicated to operate, create data silos and replication, don’t facilitate hardware and software optimization, and are intrinsically unsecure.

That’s the kind of stuff that keeps an IT manager awake night.

I do have good news to share, though. With HPE’s experience in complex AI and analytics environments, we have been able to integrate the HPE BlueData EPIC and Qumulo file system to provide customers like you with a simple,flexible and comprehensive AI environment.

We built out the following lab scenario based on a real customer’s IoT process:

The goal of the solution tested was to leverage the HPE BlueData EPIC Software to create a single namespace containing multiple environments that could access data from a Qumulo environment. The results would then be analyzed for performance during the integration process. 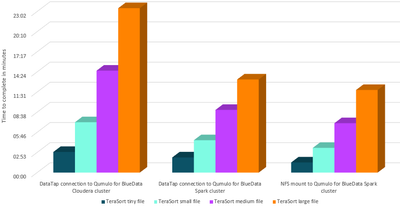 A Spark Analytics engine was used to test the performance from HPE BlueData clusters (Cloudera and Spark) to the Qumulo File System. We tested the Spark clusters connected to Qumulo data via DataTap first, and then we compared the results with Spark clusters directly connected, via NFS mounts, to the same Qumulo environment.

The testing results confirmed that there was no performance degradation when using DataTap compared to using an NFS mount. The HPE BlueData and Qumulo environments were vanilla installations — with no performance or configuration tweaking required.

Here's a demo that Calvin Zito got showing Qumulo in action - but note this is not with HPE BlueData. 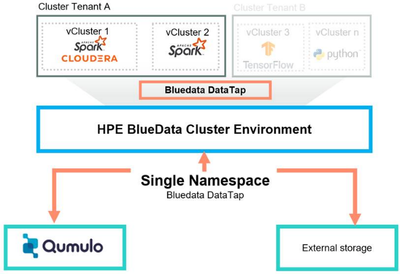 The Lab team’s testing demonstrated that the integration of HPE BlueData and Qumulo can provide a single, flexible environment where multiple clusters are created that could ultimately deploy the same tool to work with the same data—with no cluster sprawl or dealing with multiple storage systems.

Data scientists and analysts can focus on analyzing the test data with their preferred tools, while DataTap allows them to access all data lakes without having to create multiple copies and without a performance penalty.

To find out more about how to Handle massive IoT data with HPE BlueData and Qumulo please check out our References Source list:

Meet HPE blogger Eric Brown, an HPE Solutions Engineer who has worked with HPE Storage for over 20 years. His areas of expertise are Big Data and Analytics.