You don’t have to be a Formula One fanatic to understand that successful racing is all about performance, precision, agility, and … (wait for it) … data. Neil Bailey, head of IT infrastructure at Red Bull Racing, knows that as well as anyone. 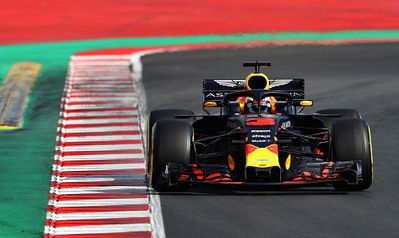 Based in Buckinghamshire, England, Red Bull Racing designs, manufactures, and races high-performance F1 vehicles. As of its 2017 season, the team has notched 55 wins and four double world championships, in part by adapting to design changes and new regulations with agility – including a more agile IT infrastructure.

Race team relies on IT for success

A race car may be a finely-tuned machine driven by a gifted athlete, but it is also part of a technology platform that generates around 400 GB of data over the course of a race weekend. With proprietary, F1-specific applications generating this much data, Red Bull Racing needed a solution for its growing storage needs. A mix of traditional virtualized servers plus virtual desktop infrastructure resulted in roughly 500 VMs spread across disparate hardware, creating a disjointed and heterogeneous environment.

Crucial decisions—such as when to “pit” a car during a race—depend on lightning-fast analysis conducted by a portable data center that is set up trackside on race day. “We needed to be more agile,” says Bailey. “Application performance affects how quickly we can react and make a change to enhance vehicle performance.”

Red Bull Racing’s IT team considered traditional and hyperconverged infrastructures in its search for faster IT. They discovered both speed and efficiency in HPE SimpliVity hyperconverged systems. HPE SimpliVity powered by Intel® now provides the basis for administrative functions such as marketing, finance, and human resources in addition to the team’s trackside infrastructure for race-day analysis.

The difference is noticeable. For example, on race days the team offloads data in real time from a car, then post-processes it for analytics. With HPE SimpliVity, the time required for post-processing has gone from nine minutes down to two minutes. When they’re on the racetrack and seconds count, the massive increase in performance means Red Bull Racing can get better, faster answers. Neil Bailey considers that a major win.

Watch the video:  Red Bull Racing is even faster with HPE SimpliVity