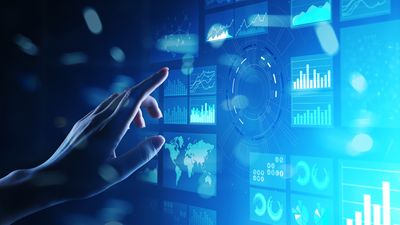 HPE InfoSight is an industry-leading Artificial Intelligence for Operations (AIOps) platform with the power of predictive analytics and machine learning. The industry’s most advanced AI for infrastructure brings software-defined intelligence to the data center with the ability to predict and prevent infrastructure problems before they happen and drive actionable management solutions. HPE InfoSight is a SaaS service that does not require on-premises deployment and is included with HPE products with no additional licensing.

Optimizing the data center for innovation requires taking advantage of all the rich machine learning and predictive analytics that’s available across the installed base and doing something with that data to make intelligent decisions. You can do that with the data provided by HPE InfoSight. There are 5 key steps in the HPE InfoSight machine learning and predictive analytics process as shown in the figure below: 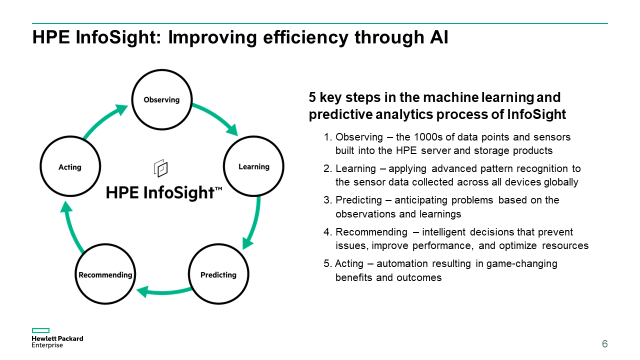 HPE InfoSight brings simplified, AI-driven operations to the hybrid cloud world, transforming how infrastructure is managed and supported. This powerful innovation is now available for HPE SimpliVity.  HPE InfoSight for HPE SimpliVity creates an environment that has great insight into itself with features including automated wellness alerts, historical capacity utilization trends, forecasted days until physical capacity is full, system details, and HCI specific virtual machine (VM) vision such as identification of which VMs are consuming the most resources.

As we drill deeper, you can see a view into your used space, physical space and capacity savings     (see Figure 3).

Each HPE SimpliVity node allows you to view its used and available capacity with a single click (see Figure 4). This shows a simple but comprehensive view of top performing virtual machines, enabling you to understand the performance of your virtual environment (see Figure 5).

Figure 4 – Easy to read view of an HPE SimpliVity node

HPE Infosight for HPE SimpliVity simplifies VM administration, making the lives of administrators much easier.  There is less searching for the information needed, and with Proactive Wellness, you no longer have to worry about when you’ll run out of capacity or when something unexpected will happen in your environment. The name ‘Proactive Wellness’ says it all – it’s proactive, so you don’t have to be reactive.

With easy to read dashboard views and comprehensive reporting, HPE InfoSight for HPE SimpliVity frees up time. And, with the ability to export these dashboard to a CSV file, you don’t need to hunt to find what ails your data center -- HPE InfoSight does it automatically.

This blog covers only a fraction of what HPE InfoSight can bring to the data center.  To learn more, follow me on Twitter @ haron_hpe or Vinay Jonnakuti, @ jvinaymohan. 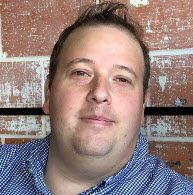