As part of the NimbleOS 5.2 blog series; this is a technical article covering SmartSAN - also known as Target Driven Zoning - for Fibre Channel environments.

One of the new features introduced with NimbleOS 5.2.1 is support for Target Driven Zoning (TDZ). At HPE, we call this capability SmartSAN to emphasize the automation aspect of TDZ.

In the name of efficiency, throughout the rest of blog I will refer to it as TDZ.

TDZ is a relatively new zoning standard called Peer Zoning, developed by the T11 FC-GS group with the intent to simplify and reduce the number of steps and zones required when deploying a new storage device. Incidentally, the T11 working group is the group which developed the Fibre Channel standard. (An excellent article & blog is available here by Rupin Mohan).

Why is it needed?

Fibre Channel zoning is a fundamental and necessary step  in the deployment of a disk array. It is defined in the FC-GS and FC-SW standards and provides the ability to separate initiators (host ports) from Targets (array ports) by creating device isolation which in turn translates to less device chatter, fewer RSCN (Registered State Change Notifications) and provides overall better security.

However, Fibre Channel zoning is still is a complex, tedious and error prone process and over the years has been the subject of frequent criticism and the root cause for many connectivity issues and downtime.

In order to simplify things the T11 group developed a new zone type  known as TDZ or Peer Zoning. TDZ introduces automation and removes much of the human factor from the zoning process.

The TDZ concept is simple. Since host ports log in to storage target ports, that means storage arrays have all the information they need to create the zones automatically which is precisely what happens. 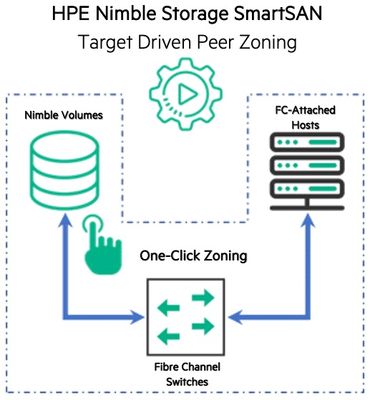 TDZ automatically creates peer zones for each supported initiator group. When it is enabled, the host ports (WWPNs in the initiator groups) are associated with these peer zones. The host ports can then log into the target ports (array WWPN) without manually configuring Fibre Channel zones.

If you have a large number of target ports, we recommend that you check your initiator group configuration to ensure that you have an optimal number of paths per LUN before enabling TDZ.

How do I enable it?

First of all, you need NimbleOS 5.2.1. By default TDZ is disabled on the Nimble array for upgrades or new installations, but you can easily enable it using the Nimble UI or CLI.

Check the “Enable” box in the networking section, and create a prefix. The prefix is used in the name of the zone in the fabric. 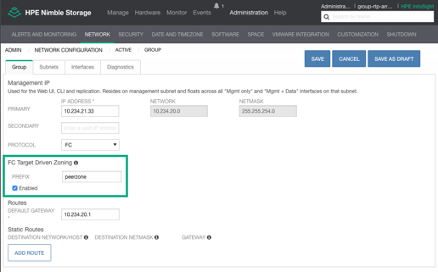 Enable TDZ within the networking menu of the Nimble UI

Enabling TDZ within the Nimble CLI

Associating All Target Ports with an Initiator WWPN

This would similar to creating a Single Initiator to Multiple Target zone. As you can see, the nice thing with TDZ is you don’t have to touch the fabric since the zoning process is “Driven” by the “Target”, i.e the array. 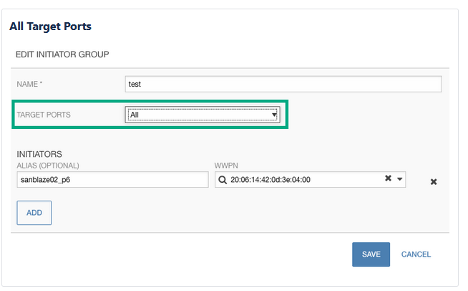 As arrays scale their target ports, it becomes important to minimize the number of paths since OSes and Hypervisors impose path limits. With TDZ you can select which Target ports you can expose volumes through. 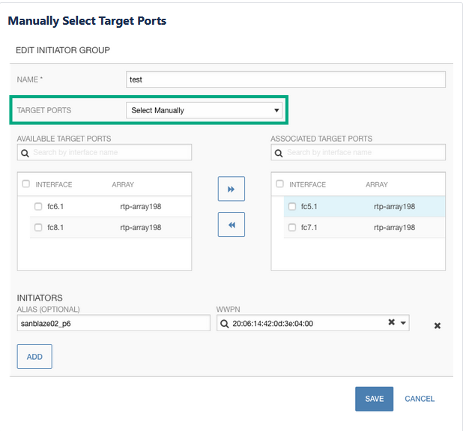 Within the Nimble architecture there is the concept of array groups. Array groups are collections of up to four arrays that are consumed and managed as a single entity. Grouped arrays allow customers to aggregate resource for increased performance and capacity - across different generations or media types of Nimble array.

Since each system inherently belongs in its own group even when operating alone, a customer has the option to merge multiple array groups into a single group should they wish at any point. We covered this feature a LONG time ago when it was released in NimbleOS 2.0!

With respect to TDZ, when performing a group merge the pre-merge conditions will determine if TDZ will be enabled post-merge.

Let's take a look at some examples of performing a group merge, where we're going to merge Group B into Group A. As part of the merge process, it will designate Group A to be the 'Group Leader' - a role is given to the first array within the group, and maintains and distributes cluster and configuration information to other nodes within the group. (it is possible to migrate group leader roles if you wish non-disruptively).

In the below scenarios we see the end result of Target Driven Zoning after performing a group merge of a Nimble Gen3 "thousand" series platform with a current Nimble Gen5 platform - with various settings across the different array groups.

As we can see, when TDZ is enabled or disabled on both platforms merging together the result is quite simple. However the group merge functionality wouldn't be available if you attempted to merge an array with TDZ enabled into a group where TDZ is disabled. 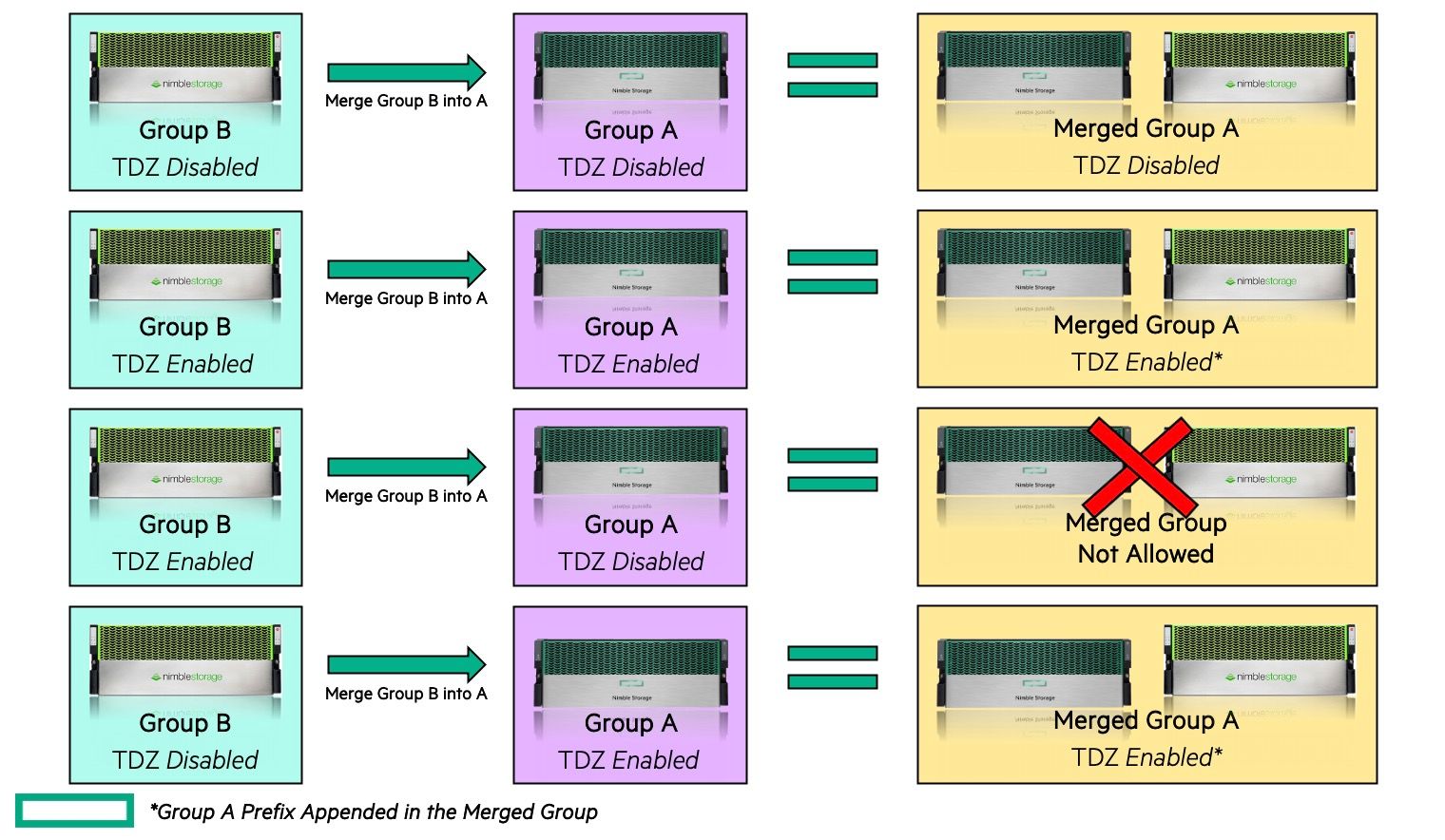 the expected behaviour of TDZ when performing a group merge

Nimble customers now have the additional option to further reduce manual error prone FC zoning tasks by using TDZ and zone automation from within the Nimble UI. The process will not only reduce the number of zones but also significantly reduce the time spend on tedious zoning tasks.

For more information on HPE Nimble and Primera news please check out these articles:

As a reminder, registration for HPE Discover 2020 is FREE!! With your registration, HPE will donate $10 to your choice of one of 10 featured causes. Join us and give back to organizations helping people, businesses and communities around the world recover from the COVID-19 crisis. Read more about these organizations and the great work they are doing to support COVID-19 recovery around the world. (Terms and conditions apply.)

Note: Once registered you will be able to sign in to HPE Discover and search by Session ID or by area of interest to build your schedule.

We look forward to seeing you virtually at HPE Discover 2020!