You can’t go to DockerCon without anything new and exciting to talk about. This year is no different in that regard but I’d say this year our engineering teams have been busier than ever. Since the inception of HPE Cloud Volumes (former Nimble Cloud Volumes) we’ve talked about how we would be able to support containerized workloads. From day one we’ve been able to provide storage to instances running Docker to serve the local registry and local volumes. When we published the REST APIs we made it fairly trivial to provision Docker Swarm clusters running on HPE Cloud Volumes using Ansible. Today I’m pleased to share the next milestone as we preview the Docker Volume plugin for HPE Cloud Volumes on AWS!

The plugin runs like any other Docker Volume plugin on each of the cluster members and allows users to provision persistent storage for containerized workloads seamlessly from HPE Cloud Volumes. For our current customer base it means that you don’t have to compromise on storage capabilities when moving workloads to the public cloud (we can replicate your on-premise data from any HPE Nimble Storage array onto HPE Cloud Volumes for use with the Docker Volume plugin instantly). For net new customers and prospects you can think about this as a many times more reliable EBS with unmatched data services such as instant snapshots, clones and the ability to instantly restore a volume to a known state - there is no transferring to S3 involved which seem to be a popular pattern for some of the software-defined storage solutions you can run on top of EBS in a BYOD fashion for container-native storage solutions. That also brings an important point across as HPE Cloud Volumes is a true cloud-native storage-as-a-service.

Using the ‘hpecv' Docker Volume plugin
Without further ado, let’s dig into the details. Please bear in mind that what you see below is tech preview software and may change without notice before release. The Docker Volume plugin installs on your Linux EC2 instances and registers a volume driver named ‘hpecv’. You need to generate an access and secret key from HPE Cloud Volumes that you store on the host itself to allow seamless interaction with our APIs. There’s also a lot of other minutia relative to your cloud we need to know about when we provision resources. Luckily, all this can be preconfigured and will be taken as defaults when creating new volumes.

Having all these defaults set, we can now very elegantly create and inspect a volume:
$ docker volume create -d hpecv myvol1
myvol1

So, what we have here is a fairly modest 1GB, 300 IOPS volume served from our General Purpose Flash (GPF) tier with automatic snapshots taken twice daily with a revolving retention of 4 snapshots.

We pride ourselves with making things as simple as possible but don’t want to limit the end user. The system administrator sets up a set of default parameters but may also provide overrides for parameters that the end user can’t manipulate, such as protection schedules, IOPS caps and volume types. The parameters available for volume creation is always available through the help parameter:

Universal options:
-o mountConflictDelay=X X is the number of seconds to delay a mount request when there is a conflict (default is 0)

Import Volume options:
-o importVol=X            X is the name of the existing Cloud Volume to import
-o forceImport            forces the import of the volume.  Note that overwrites application metadata (optional)

As you can see, we have not spared any functionality. All the life-cycle controls, snapshot, cloning and importing operations are all there as implemented by our HPE Nimble Storage Docker Volume plugin for on-premise arrays.

Use cases
We see a number of different trends in the DevOps space where our integration can provide tremendous value for a broad spectrum of use cases. Lift & shift workloads to the cloud — replicate your data from on-premises and import the data into a Docker Volume. Do cloud bursting, again replicate your data to the cloud, run long-running reporting jobs and analysis by using cloud computing as a complement to on-premises compute infrastructure. Enable Enterprise applications in the public cloud using containers without sacrificing traditional reliability, availability and serviceability normally found on Enterprise-grade storage arrays but consume in a cloud-native model. Use the public cloud for dev and test and present your datasets to ETL and CI/CD pipelines running in containers.

One of the demos we’re bringing to DockerCon leverages our snapshot, cloning and automatic lifecycle controls to build, ship, test and deploy an application that relies on an 800GB database with about 10 million rows. The CI/CD pipeline is setup in Jenkins and a build job from push to GitHub to deployed and running in production completes in less than 2 minutes —in those two minutes, the staging environment is torn down and re-provisioned with the new image running of a fresh clone and later pushed to production after successful tests. Obviously, the tests aren’t that sophisticated, but it proves the point you no longer have to copy data around to do reliable testing with data from production which will in turn boost quality and developer productivity.

What about Kubernetes?
The Docker Volume plugin for HPE Cloud Volumes is fully compatible with the HPE Nimble Kube Storage Controller and FlexVolume driver. It’s therefore possible out of the gate to leverage Kubernetes, Red Hat OpenShift and Docker Enterprise Edition 2.0 as the container orchestrator. All the parameters available to the Docker Volume plugin may be used with the FlexVolume driver directly or leveraged by StorageClasses in Kubernetes.

This is nothing new for users familiar with the NLT-2.3 release we announced some time ago. The Docker Volume plugin for HPE Cloud Volumes will have a very similar interoperability across container orchestrators as the HPE Nimble Storage array integration. 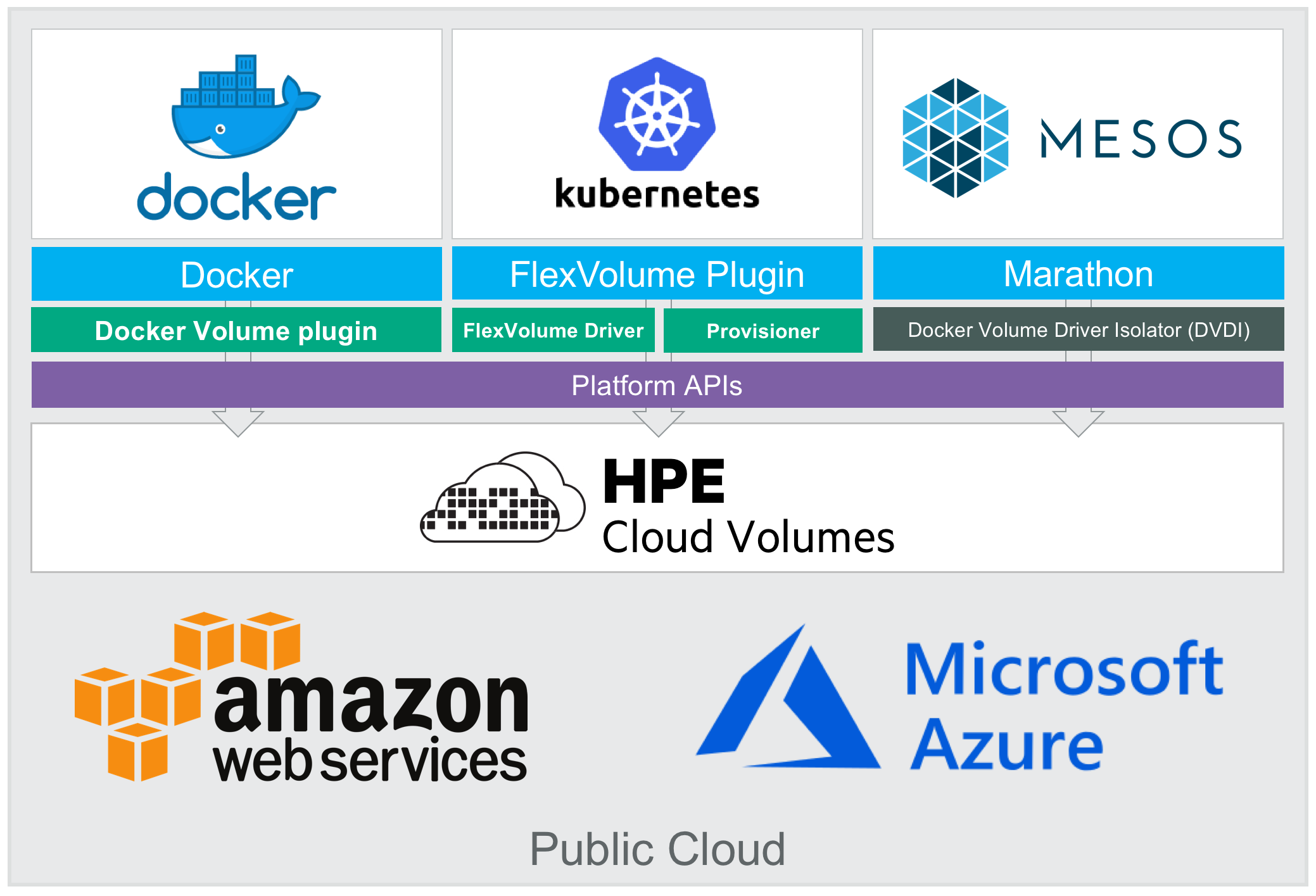 Docker Enterprise Edition 2.0
We are going to DockerCon and I want to congratulate our partner Docker for their flagship product release with Docker Enterprise Edition 2.0! Innovation never stops and Docker basically re-invented themselves by introducing Kubernetes on Docker as a complement to Docker Swarm. We’ve been working closely with Docker the last few months to ensure that our integration with both Docker Swarm and Kubernetes may co-exist in the same cluster and users can enjoy persistent storage for both Swarm and Kubernetes, but for on-premises HPE Nimble Storage arrays but also for HPE Cloud Volumes. Yes, that’s right, all the tech preview demos we’ve prepared for DockerCon around HPE Cloud Volumes runs on the officially supported Docker Enterprise Edition for AWS! Unfortunately we don’t have a firm release date yet for the HPE Cloud Volumes integration but it will be coming out later this year.

We just quite recently published the HPE Nimble Storage Integration Guide for Docker Enterprise Edition for customers on HPE InfoSight. It contains all steps needed to successfully deploy a supported persistent storage solution both for Docker Swarm and Kubernetes on Docker EE 2.0 with HPE Nimble Storage.

I hope to see you at DockerCon!