In this this blog we'll introduce a sneak preview of what we can expect to ship with HPE CSI Driver for Kubernetes v1.5.0 which introduces support for HPE Cloud Volumes Block, which in turn delivers a unified user and management experience for private, public and hybrid cloud Kubernetes.

Kubernetes is broadly associated with cloud native and has gained tremendous success running in the public cloud, either as a managed service or directly on cloud compute instances. It also follows naturally that you would leverage public cloud offerings when it comes to providing persistent storage for Kubernetes. HPE Cloud Volumes provides a hybrid and multi-cloud storage service that caters to demanding workloads with requirements similar to enterprise storage – particularly when it comes to data services, availability and durability – when compared to public cloud counterparts.

The Container Storage Interface (CSI) is the gRPC API that vendors implement to provide CSI drivers with seamless integration into Kubernetes. The CSI provides capabilities such as dynamic provisioning, snapshots, clones, volume expansion, and lifecycle controls.

HPE CSI Driver for Kubernetes is a multi-platform and multi-vendor driver that removes all Kubernetes and host OS minutia from the process of developing support for additional storage backends. A separate service, running either on Kubernetes, a separate appliance, or on the storage backend itself is what is called a Container Storage Provider (CSP) to the HPE CSI Driver. An administrator simply declares where to find the CSP, and includes a few details on how to authenticate to the storage backend control plane. This makes it very easy to add additional backends.

At a glance: HPE CSI Driver for Kubernetes

The most important aspect of this delivery vehicle is that customers and partners have a unified experience when getting started with their HPE storage platform. Also, the industry-leading capabilities and the rich partner ecosystem surrounding the HPE CSI Driver for Kubernetes ensures support and interoperability for the most demanding workloads.

Kubernetes brings an unambiguous interface to build, deploy and manage complex applications. Developers can build and run their apps on their laptops and the outcome will be exactly the same – whether Kubernetes is running on-premises or in the public cloud. Applications are per definition portable. The challenge arises for stateful applications when data is stored outside of the container image. Data has gravity, and the app is not as easily ported to a different paradigm, such as moving from on premises to public cloud and vice versa.

Inherently, HPE Cloud Volumes Block provides excellent multi-cloud data mobility. These capabilities are now being made available through a Technology Preview of the HPE Cloud Volumes CSP. This allows developers and Kubernetes operators to deploy stateful applications everywhere while using familiar data services across paradigms and making use of data across boundaries for a wide variety of use cases, such as multi-cloud, DevOps with CI/CD pipelines, and employing disaster recovery strategies. 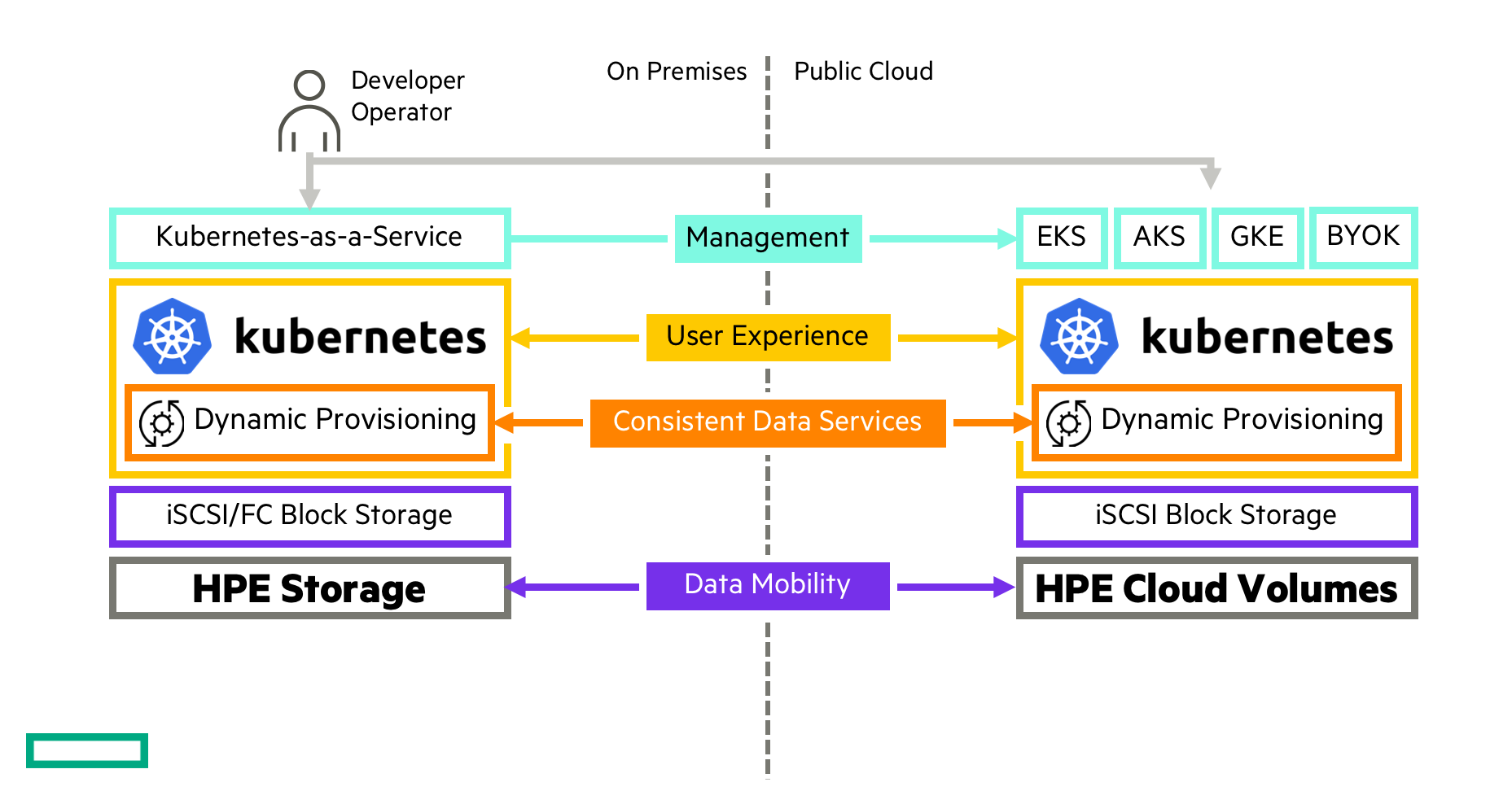 The HPE Cloud Volumes CSP will be introduced in version 1.5.0 of HPE CSI Driver for Kubernetes. It's available immediately for non-production workloads – as a tech preview – using beta software. Please note: It's not supported by HPE, and the current available capabilities are not yet finalized.

Below are a few resources to get started.

While the HPE Cloud Volumes CSP isn't officially supported yet, you may engage with the team on the HPE DEV Slack community at slack.hpedev.io.

Be on the lookout for more exciting use cases and capabilities for hybrid cloud Kubernetes from HPE later this year!