A new survey from TechValidate gives a powerful voice to HPE StoreOnce customers. Hear in customers' own words how they are transforming hybrid cloud data protection with StoreOnce. 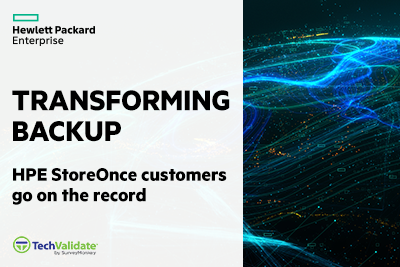 A recent HPE StoreOnce customer survey conducted by TechValidate, on behalf of HPE, aims to better understand how StoreOnce is helping our customers reduce cost, risk, and complexity with flash-speed protection in the data centre, as well as low-cost archive and disaster recovery in the cloud. From small businesses to Fortune 500 companies across all industries and geographies, we’ve heard real-world stories about how customers are putting StoreOnce to work to deliver end-to-end data protection as they evolve to hybrid cloud.

The feedback we’ve received has provided great insight into our customers’ world. My two-part blog series, publishing this Tuesday and next Tuesday, will provide a sampling from hundreds of StoreOnce customer testimonials and recommendations, enabling you to hear the true voice of our StoreOnce customers. And it will hopefully prove useful if and when you’re trying to decide which solution to choose when upgrading your data protection infrastructure. Follow along these social channels too to learn more about why our customers are choosing HPE StoreOnce: @HPE_Storage and HPE Data Storage on LinkedIn.

What were the top data protection challenges that customers faced prior to implementing HPE StoreOnce?

As the value and business-criticality of data increases, the challenges of protecting data are tougher than ever. According to the StoreOnce customer survey, topping the list of specific problems were performance issues, exploding data growth and copy data sprawl, demanding service-level requirements, and an evolving threat and compliance landscape. 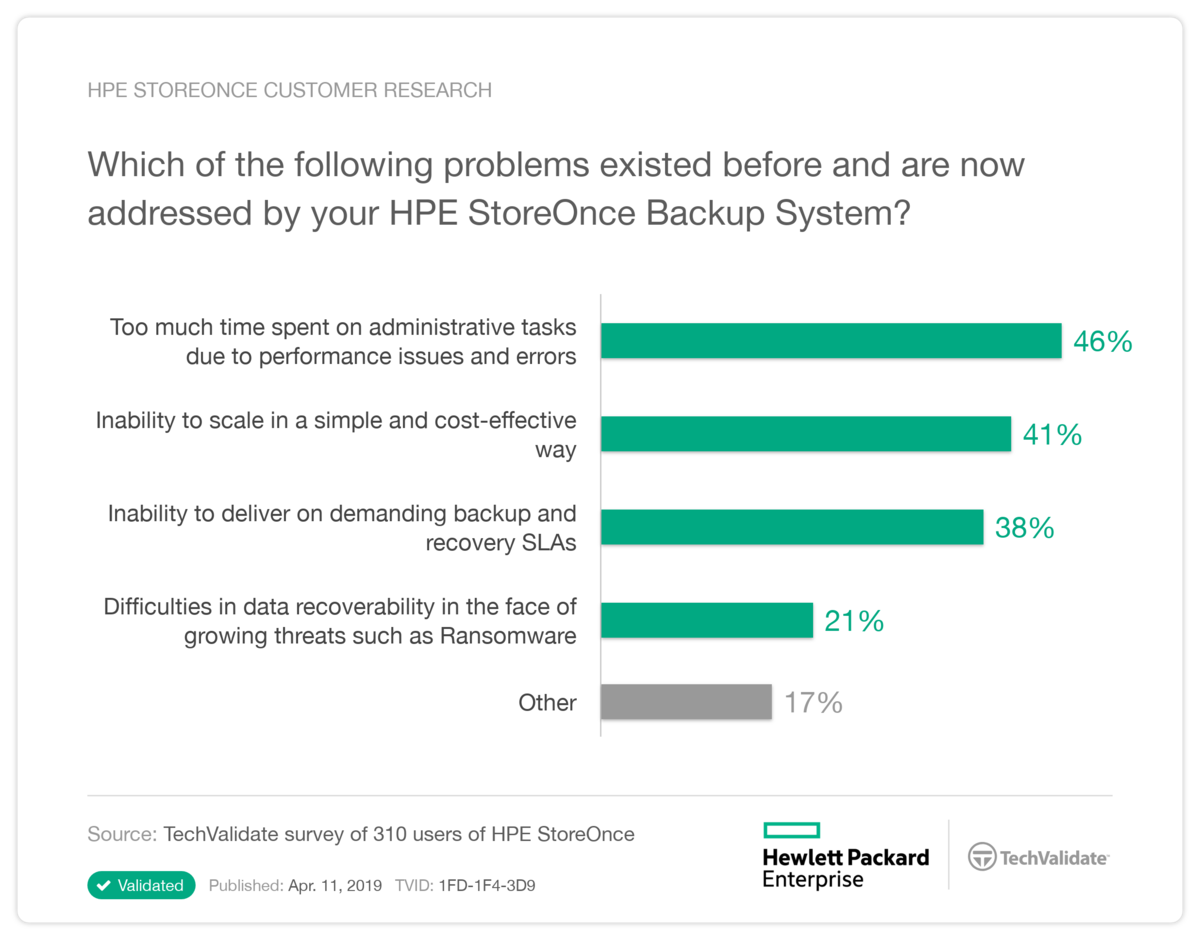 Which HPE StoreOnce capabilities do customers value the most? 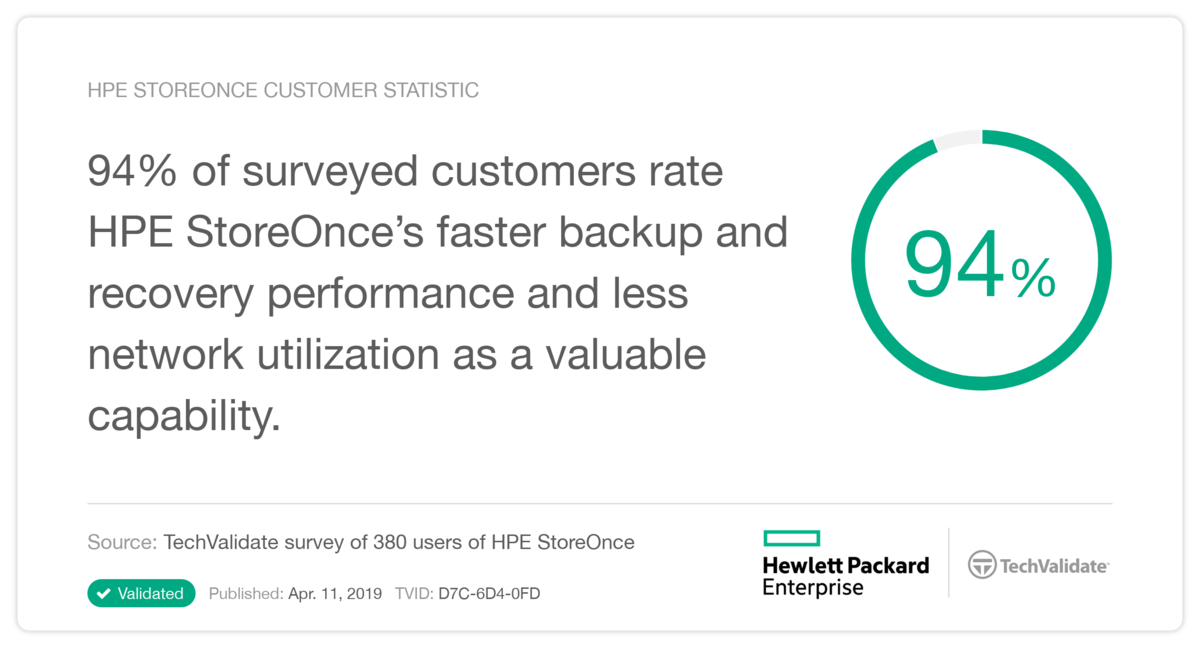 According to the report 91% of surveyed StoreOnce customers rate encrypted backups, data integrity checks, fast restores and high availability storage as a valuable capability. And 82% of surveyed customer saw an increase in system availability by 26-50% or more after using HPE StoreOnce. 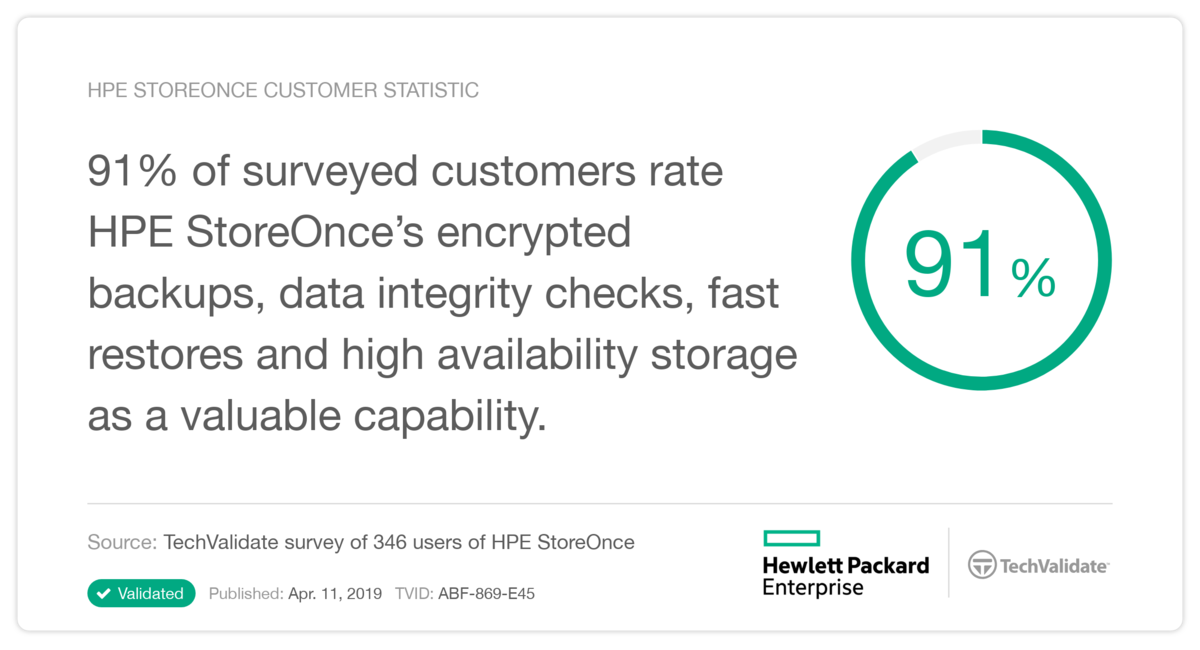 According to the survey 90% of respondents rated HPE StoreOnce’s pay as you grow scalable capacity and intelligent deduplication storage efficiency as a valuable capability. 89% of surveyed customers saw a reduction in backup storage capacity required (due to deduplication) by 26-50% or more after using HPE StoreOnce. 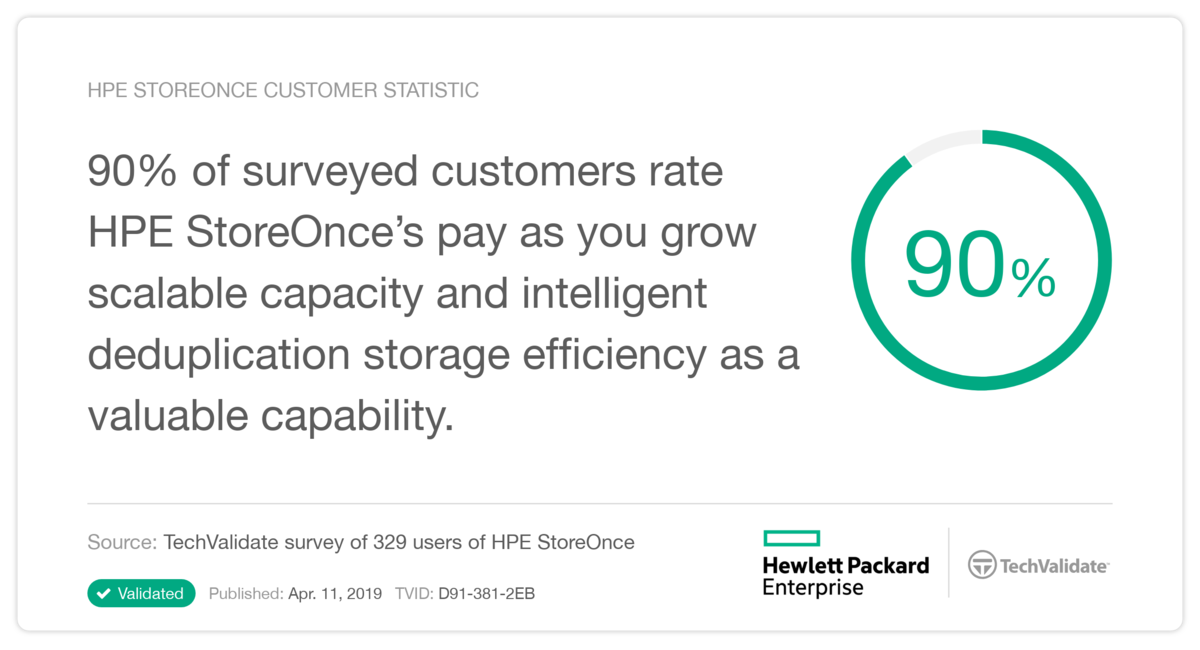 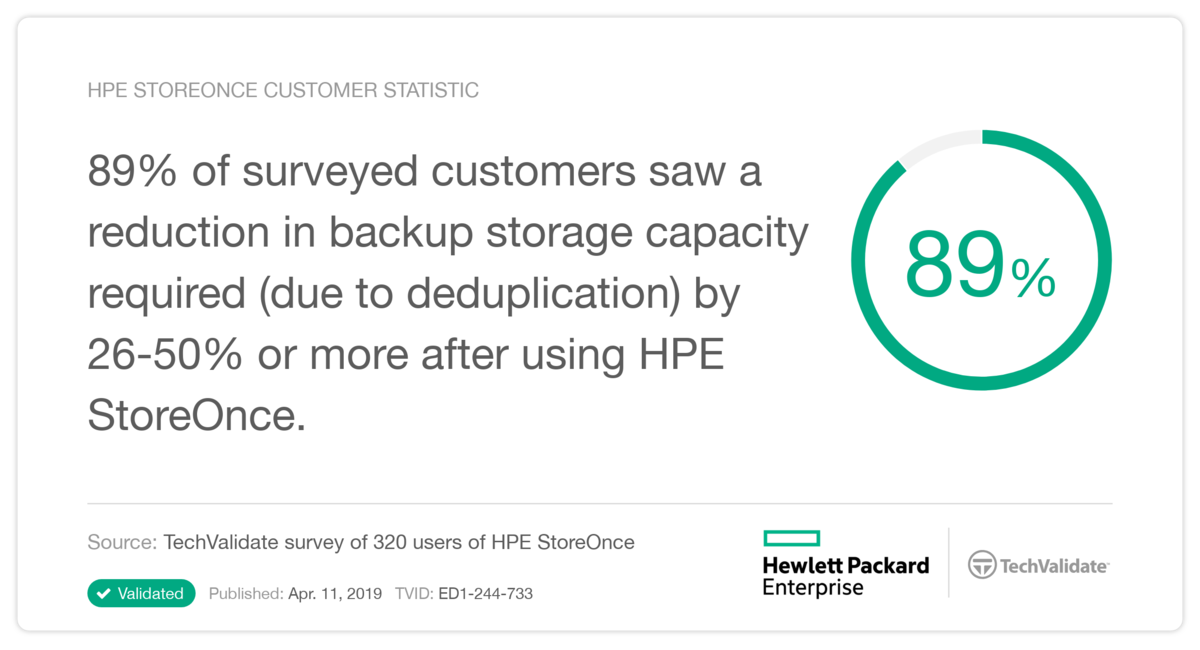 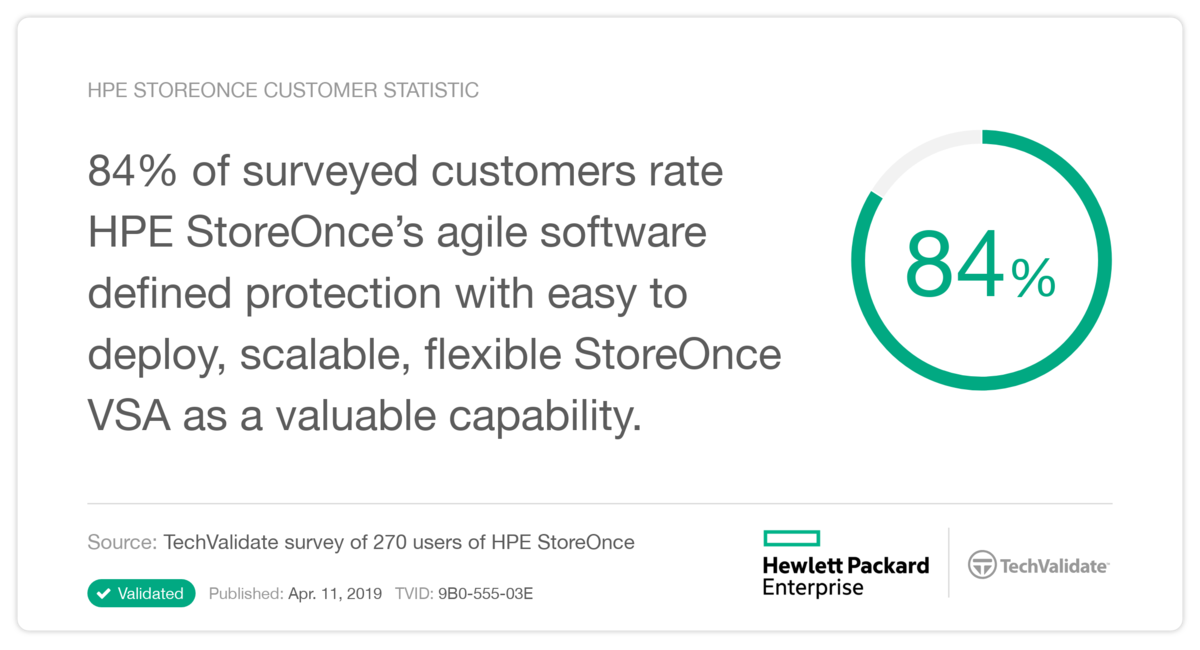 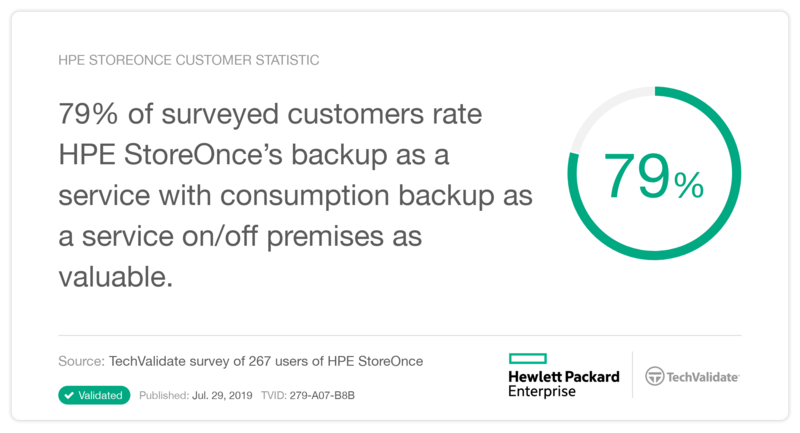 69% of surveyed StoreOnce customers rated StoreOnce’s native cloud integration and ability to backup only unique data to the cloud as a valuable capability. 75% of surveyed customers saw a reduction in cloud storage costs for backup (due to deduplication) by 26-50% or more after using HPE StoreOnce. 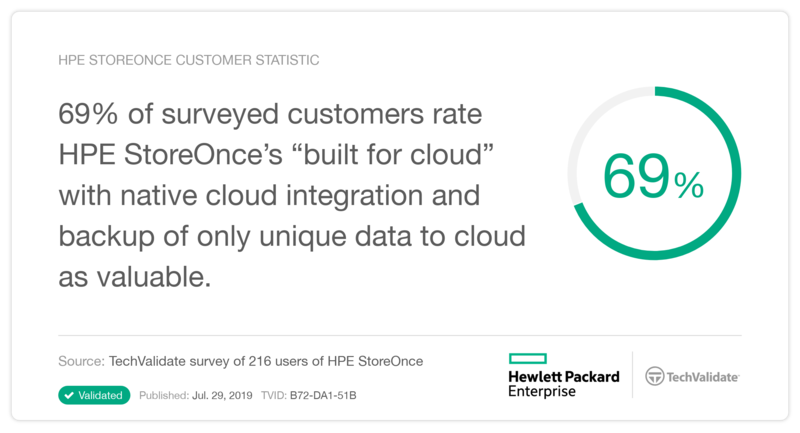 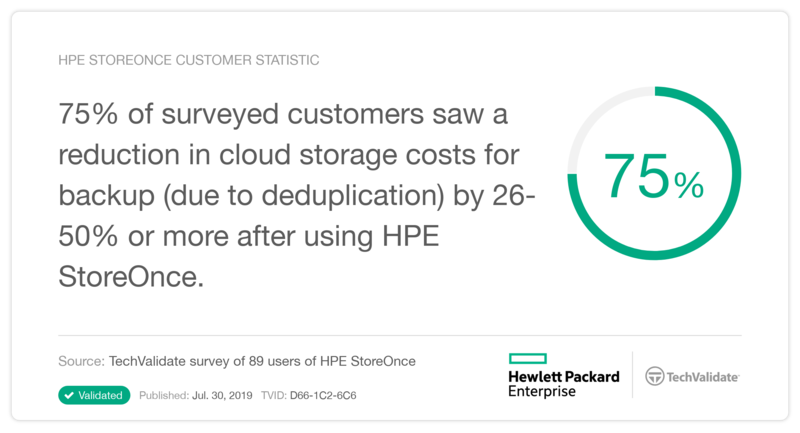 These TechValidate research findings provide a wealth of “quantatitive” statistical proof points for how StoreOnce simplifies operations, delivers on SLAs and protects data your way - letting you easily and efficiently leverage the economics and agility of the cloud for archive or disaster recovery, while continuing to use your on-premises infrastructure for fast and reliable operational recovery.

In part 2 of the blog series will we spotlight some “qualitative” HPE StoreOnce testimonials and case studies from the survey that show—in our customer’s own words—how HPE StoreOnce is making a real difference to their day-to-day lives.

Thank you to all our customers that participated in our survey. Your opinions matter to our business.

And find out where you are today, and where HPE StoreOnce can take you tomorrow, with a free data protection assessment from HPE.

[v] The 3-2-1 data protection best practice prescribes that you have three copies of your data, on two different media types, with one copy kept off-site

[viii] Assuming dedupe ratio of 20:1 as compared to a fully hydrated backup

[x] Assuming dedupe ratio of 20:1 as compared to a fully hydrated backup