What's the difference between vRealize Operations, OneView, and InfoSight?

I have often been asked the question about what’s the difference between HPE OneView, VMware VRealize Operations or HPE InfoSight. The three products might look similar on first glance, however when you look at them individually that’s when their difference start to appear. The three products may have some overlapping functionalities but are unique and provide a myriad of features which are usually complementary to each other.

Let’s look at each of them in detail followed by head to head comparisons of these products.

HPE InfoSight has now been extended to HPE servers (Proliant, Synergy and Apollo) and HPE Storage (3PAR and HPE Nimble Storage). With HPE InfoSight we get in-depth details into overall system health, performance metrics, data protection as well as predictive analysis in terms of capacity and performance.

HPE InfoSight provides powerful dashboard to track the health of your systems, to improve operational performance, to monitor, forecast and predict capacity utilization and to proactively manage the wellness of your systems. There are also AI based workflows for the end user to learn more about how their environment is performing.

In addition, HPE InfoSight provides proactive performance recommendations and various workload planners for the customer’s infrastructure. All this is possible by correlating millions of data points collected across the install base along with the differentiated, mature analytics engine. 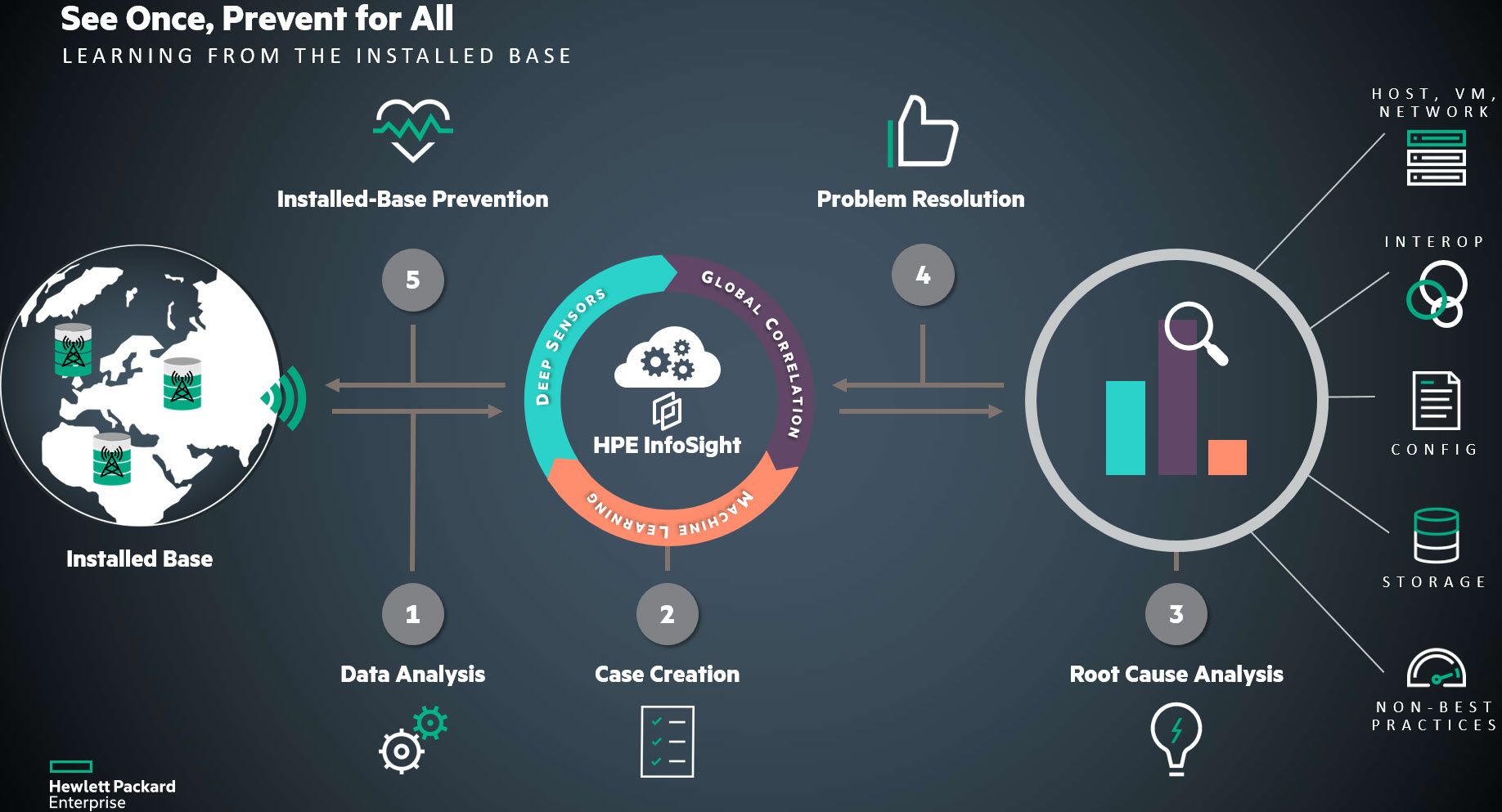 VMware vRealize Operations, sometimes referred to as vROps and formerly called vCenter Operations Manager, is a part of the vRealize suite of products from VMware. vROps is a software product that provides operations management across physical, virtual and cloud environments, no matter if those environments are based on vSphere, Hyper-V or Amazon Web Services.

HPE OneView is a management platform that provides a unified interface for the administration of software-defined systems in a datacenter. Infrastructure management tools are collapsed into a single resource-oriented architecture that provides direct access to all physical and logical resources and can automate management and maintenance tasks that traditionally have been performed manually, requiring several different tools.

When it is fully implemented, HPE OneView manages servers, storage, networking resources throughout their lifecycle.  Some of the key features of HPE OneView include provisioning and management of both physical and logical resources, RESTful API for uniform interaction with various resources, simple integration with management tools including products from VMware, Microsoft, and Red Hat.

Now how does vRealize Operations manager and OneView complement each other? HPE working with VMware came up with their own integration of OneView and vROps. There are basically two different integration models.

OV4VC essentially has a virtual appliance that’s runs on a vCenter and provides plugin based functionalities to manage only HPE storage, servers or both right from the vCenter. The plugin and appliance are free of cost. OV4VC can feed some data to OneView. For more information on OV4VC refer https://h20195.www2.hpe.com/V2/getpdf.aspx/A00000108ENW.pdf?

HPE 3PAR Storage Management Pack integrates directly into vRealize Operations Manager through a dashboard tab specific to HPE storage. This dashboard allows VMware vSphere administrators to quickly view storage capacity, performance and health information and troubleshoot scenarios that span across virtual and physical layers, which includes the HPE Storage layer. The HPE 3PAR plugin for vROps is completely stand-alone and is a free plugin for use with vROps.

Please refer to this page for additional information on various plugin integration between HPE storage and vRealize suite.
https://h20392.www2.hpe.com/portal/swdepot/displayProductInfo.do?productNumber=HPEVMW

As mentioned before, HPE InfoSight and VMware vROps are complementary in many ways even though they provide similar functionalities. Here is a tabular comparison of the high level features of the two products. Both the products are capable of providing additional functionalities outside of the features listed below. Always refer to the individual vendor guides and documents for specific feature and functionalities. 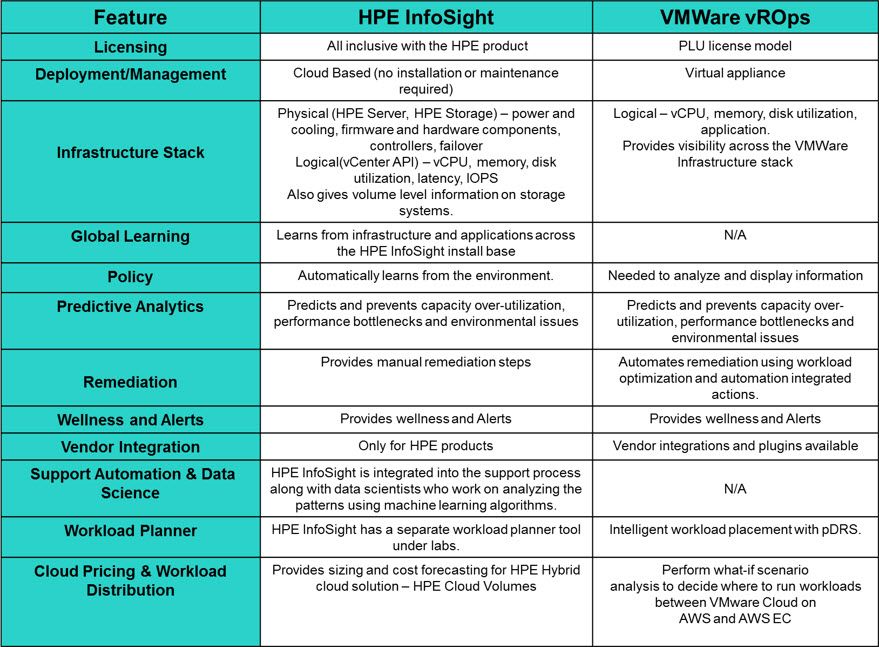 Feature ComparisionTo summarize, the three products have their own features and can bring unique capabilities when deployed in your environment. HPE OneView as a standalone product provides tools and capabilities to build, manage and maintain your HPE environment. If you’re looking for SaaS based no cost, no maintenance AIOps solution for your infrastructure that’s HPE InfoSight.  VMWare vRealize Operations (vROps) is for those who want in-depth monitoring and management across their virtual and cloud environment leveraging the VROps infrastructure.