We just bought a Aruba 2930F Switch for a customer. We need to configure policy based routing because we have two Internet connections. The quickspecs of Aruba 2930F (Link: https://www.hpe.com/h20195/v2/GetPDF.aspx/c05052929.pdf ) describes that the switch is capable of PBR.

Can anyone send me a manual how to configure pbr on that switch?

Manuals, Firmware files with associated Release Notes and more other interesting documents about Aruba 2930F can be easily found on its HPE Support page here: it should not be too difficult for you to search there what you're looking for.

IMHO, in contrast with what is reported on Aruba 2930F Datasheet and QuickSpecs, the Aruba 2930F - even if we consider it running the very latest WC.16.02 software release - seems to not support PBR (Policy Based Routing) at the moment...this is, at least, what I understood reading the ArubaOS-Switch Software Feature Support Matrix (November 2016) and considering what is written into the ArubaOS-Switch Advanced Traffic Management Guide for WC.16.02 (September 2016) too, see below: 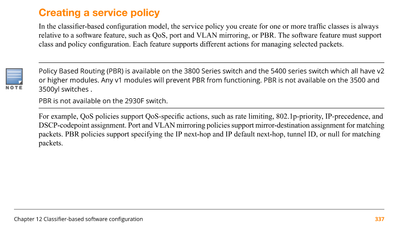 So someone at HPE/Aruba should clarify/correct this contrasting bits of informations...updating all relevant documents (QuickSpecs and Datasheet or all other guides?) which should receive an editorial correction.

A final tought: it is totally possible that Datasheet and QuickSpecs are claiming something that will became effective and released in a very near future (with a newer software branch WC.16.03 in January 2017, as example); consider - as example - the bits about Aruba 2930F and VSF...AFAIK the VSF - actually - is supported and released only on Aruba 5400R zl2 equipped with zl2 v3 Modules...this Aruba AirHeads thread should clarify why there are some controversial statements on some of Aruba 2930F documents (I particuarly like the statement "looks like marketing is a bit further then development").

Don't know if the same could apply to PBR (I mean: it could be something that is bound to the Switch's Hardware capabilities)...but, at least, the whole picture of Aruba 2930F looks now a little bit more detailed (or less confused).

Can you confirm or deny is Aruba 2930F "Policy Based Routing" capable?

Can someone explain what does it mean "limited to 16 next hop routes"?

No it is NOT capable of PBR at the moment, but it might be in future...

parnassus wrote: A final tought: it is totally possible that Datasheet and QuickSpecs are claiming something that will became effective and released in a very near future (with a newer software branch WC.16.03 in January 2017, as example);

So, in the end, few months after the above sentence (December 2016)...it happened.