Short and probably a stupid question, but.. Shouldn't this topology be loop-free or have I understood something totally wrong? The switches seem to loop when the dashed connection in the picture is connected. Shouldn't the RSTP running on either core switch block port 23? 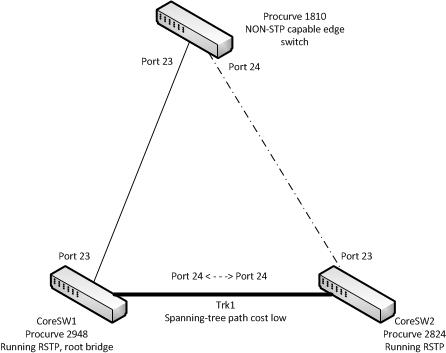 Or if this is not the correct configuration, which would be? Basically the need is to connect non-STP capable cheap racktop switches to two separate core switches, to provide core switch redundancy.

The configuration in the picture works fine with HP 2800 or higher STP capable switches as edge switches when the port blocking is done by them, but obviously not with non-STP capable 1800 series switches.

Unfortunately non-STP switches will drop BPDU packets, so your two STP enabled switches will not receive the BPDUs telling them to block the port based on the link priority you have setup.

The bottom line is that you can't have STP resilience if you have a non-STP capable switch in the loop.

Ok, nice. So basically we have to do that with two rack switches, each connected to a separate core switch by one connection.?

Well, that can be done although it is not optimal. ( We would have used two rack switches with dual connections otherwise. With the STP-capable rack switches that can of course be done then. )

Yep, with the model of switches you have you have to keep in mind you will have to have physical seperation between the edge switch and the two cores. i.e. the 1st edge connected to core1 and the 2nd edge connected to core2, I agree it is not ideal for providing resilience, but it is the best that can be achieved without forking out cash on replacing the switch.

I'm slightly surprised that the 1810 drops spanning tree BPDUs; I would have said it is more common practice to forward them on a non-STP switch.

Also, I'm always a bit troubled when people are vague about model numbers. In the diagram it's an 1810, in the text it's an 1800 series. As far as I can tell from the HPs website a Procurve1800 drops spanning tree packets but an 1810 does not. J-numbers are the most unambiguous way of specifying a model.

There were multiple different switches, so that's why I didn't specify the models so exactly. I actually though all non-STP switches would behave the same way. :)

In this particular case which was proven (only tested once though as it was a production environment..) to not work the switches were:

Hmm. If the switch in fact does support passing BPDUs, should this configuration work?

And if it does, would it be possible that it just takes time for RSTP to react to the loop and prevent it, causing a short broadcast storm? Would setting the core ports as non-edge ports help in preventing that?

Btw, I just noticed the 1810 software was extremely old. Upgraded now, but the release notes don't seem to list anything relevant to this case.

"And if it does, would it be possible that it just takes time for RSTP to react to the loop and prevent it, causing a short broadcast storm? Would setting the core ports as non-edge ports help in preventing that?"

You're definitely likely to see transient problems if you have the ports marked as edge. Otherwise I think it should work OK.

Richard Brodie_1 wrote:You're definitely likely to see transient problems if you have the ports marked as edge. Otherwise I think it should work OK.

The ports were not marked as edge, but they were in default configuration which is auto-edge. I thought that should first listen for BPDUs and not forward immediately, but maybe I was wrong..

You are right. If the port is set to auto-edge-port the port will look for BPDUs for 3 seconds and if none are received it will begin forwarding packets.

Don't forget to mark a post resolved if your question was answered.
0 Kudos
Reply
The opinions expressed above are the personal opinions of the authors, not of Hewlett Packard Enterprise. By using this site, you accept the Terms of Use and Rules of Participation.