I have a HP Procurve 5412zl acting as my gateway and I have multiple HP procurve 2810 (Client) and Procurve 3800 (Servers) uplink to it. I am trying to pass pxe traffic and it's not working. I have no problem on the same subnet.

I assume that you are wanting to PXE boot from the client VLAN? If so, you need to set the ip-helper address on that VLAN to point to your PXE boot server.

I already have IP-Helper-Address configure on the switch.

I was able to get the client to pxe boot to the Server VLAN by adding globally to the 5412zl switch this line "ip-udp-bcast-forward".

Bty enabling ip-udp-bcast-forward you are allowing broadcasts to be routed across all your VLANs/interfaces. If you just setup the ip helper address ont eh client VLAN it will only forward broadcasts from the client VLAN. It will reduce your broadcasts between VLANs somewhat. But if your happy with having all broadcast traffic from all VLANs being routed then thats fine :)

Glad to hear you got it working.

Since each environment is a bit different you can take my feedback with a grain of salt.

However, we were able to allow Windows Deployment Services PXE booting that allows for legacy and UEFI BIOS to PXE boot (without using Option 66 and 67 ). This was done in an enviorment where DHCP snopping is enabled. So the use of IP Helper-Address command didn't work for us on our switches.

NOTE:  DHCP Scope Options 66 and 67 are not officially supported by MSFT and those options will not support Legacy and UEFI bios's PXE booting... You will have to choose between legacy or UEFI support or setup two different DHCP scopes just to support both.

SO HOW DID YOU GET IT WORKING?

Take it easy - Here is the details: 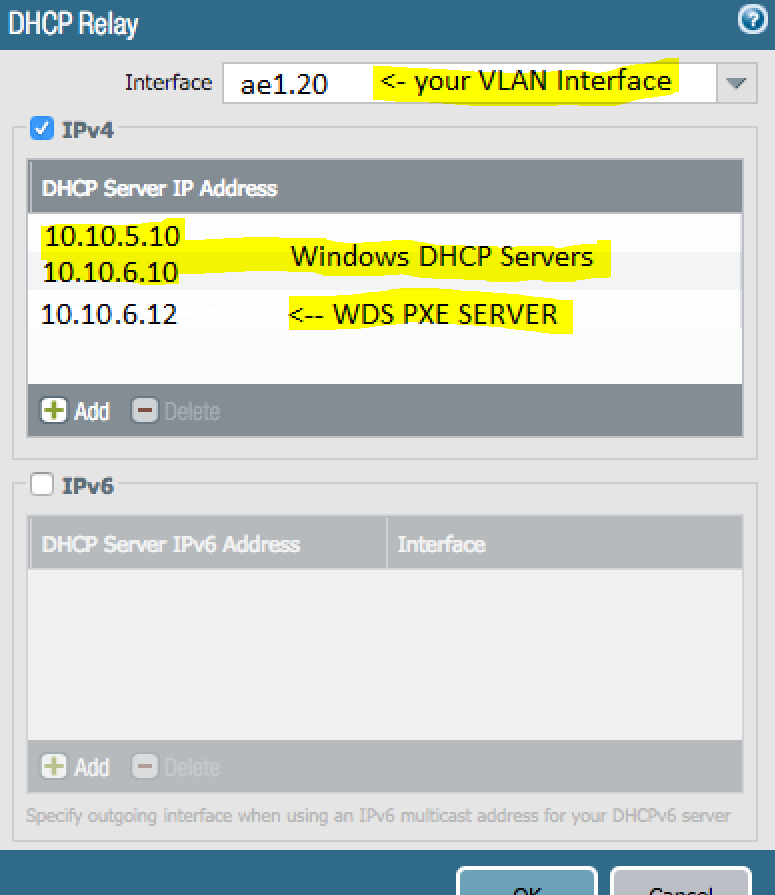 NOTE: take a look at the capture.png attached to my resply for a example of the PA relay setup.

NOTE: the IP address used in this tutorial are fictional but may look similar to other private IP address that exist in some networks. I don't sujest using my example ip address in place of your own. Enjoy!

Spoiler
Spoiler
Have Fun and Enjoy Life!
Capture.PNG ‏34 KB
0 Kudos
Reply
The opinions expressed above are the personal opinions of the authors, not of Hewlett Packard Enterprise. By using this site, you accept the Terms of Use and Rules of Participation.