We want to use the "Mulitple Network" in server profile, and use this for the Windows 2016 Hyper-V, we trunked all the VLAN and will use the 2 network cards for teaming in Windows 2016.

If we chose the "Multiple Network" (i.e vlan233 & vlan234 & vlan235) , and keep using the same IP address unchanged, it cannot connect to the network.

We tried to use "Multiple Network" with vlan232 , and keep using same IP address, it still CANNOT connection to the network.

Anyone have idea about using the "Muliple Network" in the Server profile?

I may find the resolution now. 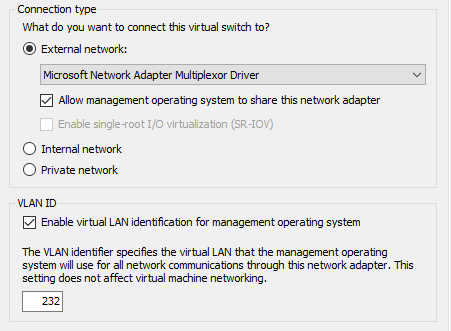 I forgot to enable the "Enable virtual LAN identification for management operation system" and type the VLAN ID whcih I should use for the Hypervisor OS.

Is the issue resolved ? or any other help needed ?

I am a HPE Employee

Yes, the issue is resolved.