Just had to do this myself. Not easy first time.

Has a 'Removal and replacement' section.

Replacing a drawer requires removing the power block as well as the drawer.

Its a multi-step procedure that begins with pushing the drawer forward, but you 'have to' loosen and slide back the 'power block' before you can release the latches holding the drawer power cables to the bottom of the chassis.

Cable management arm 'latches' behind the power block, one for each drawer.

The power block does not have to come all the way out.. it just needs to slide back far enough to let the cable management arm latches release.. they cannot be released while the power block is fully seated in place.

Doing this will also save your finger tips and lots of futile time trying to release the latches.. there is no room for them to release.

You 'have to' loosen and pull back the 'power block' there is no other way - none. To complete the procedure.

The power block has circuit boards on the inside of the power block that butt up against and prevent the latches holding the cables (to the bottom of the chassis) from fully disengaging.

Further the procedure for loosening or releasing the 'power block' is problematic.

During manufacture the top center release prong is 'riveted' to the top of the power block, leaving its flange sticking up above the power block in the same direction as the prongs.

The 'rivet' is precisely in front of the release prongs and rises 'just enough' to catch the thin metal edge of the knurled edge of the chassis on top.

If you follow directions and press down on the release lever, and then pull on the power block, the rivet will 'catch' the edge of the chassis and never release.. no matter how hard you pull.. it will remain held. It's like an invisible, very effective, third prong sticking straight up in-front of the release prongs.

And of course don't forget to loosen the finger tight plastic screw in the bottom of the power block to free that edge.

Page 40 from the manual. 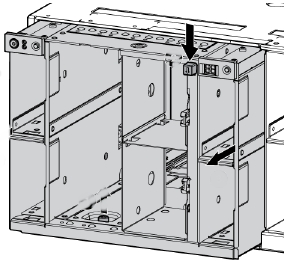 Found this out by inspecting the build of the chassis in my minds eye - then using a thin edged flat head screwdriver to 'pry up' the chassis edge directly in front of the release prongs and directly behind the release lever.. the power block immediately let go almost effortlessly. The reasoning in my mind was the prong had to be attached to the top of power block somehow.. and I imagined that had to be a rivet.

After its released you'll see the rivet has been flattened sideways from the pressure of the chassis knurled edge.

> The power block does not have to come all the way out.. it just needs to slide back far enough to let the cable management arm latches release.. they cannot be released while the power block is fully seated in place.

----------------
Was this helpful? Like this post by giving me a thumbs up below!
0 Kudos
Reply
The opinions expressed above are the personal opinions of the authors, not of Hewlett Packard Enterprise. By using this site, you accept the Terms of Use and Rules of Participation.