We have recently bought a 3Par system with two 7200 controllers and 16 1.92TiB SSD drives. We have almost migrated everything from our old EVA4400 to the new system. When bying the 3Par 7200, inline deduplication was one of the things we valued the most together with the posibility  to use an all flash system. Altough the only way we could afford using only flash drives was that we needed to buy less disks thanks to the inline deduplication.

We started our migration with the migration of 5 Windows2012R2 servers, they were newly setup and did not yet have any specific systems installed on them. We expected to se a high dedup savings value since the five machines were almost identical. We ended up with a 1,176:1 ratio and we were not that impressed!

After that we have migrated more servers to the 3Par system and we have reached a total of 1,461:1 dedup savings on the whole system, around 120 virtual servers consisting of Windows 2012 and Windows 2008.

We were still not happy with the result and we decided to compare the deduplication of Windows Server 2012R2 with that of the 3Par.

The Windows Server 2012R2 residing on our EVA4400 and with deduplication active in the operatingsystem saved us alot of space. We went from 1386GB to 449GB thus saving us alot of space, a total of 937GB.

We disabled deduplication in the operatingsystem and unoptimized the drive and run a garbage collection, then we migrated the server to an empty virtual volume on the 3Par system. The deduplication savings ratio werent nearly as good as with what we got from Windows Server 2012R2.

The server in question is used as a SCCM distribution point and there are alot of data on it that should have a high deduplication ratio.

We need help on how we can optimze the deduplication of 3Par. Have we done something wrong? Is it possible to run a scheduled deduplication job on the 3Par to improve the ratio?

Or perhaps arent the 3Par more efficient than this?

If thats the case we might aswell start using Windows own deduplication again.

Any help is appreciated.

What HP 3PAR OS version are you using?

What command is giving the dedup ratio?

We are using the GUI for creating volumes. When we create a virtual volume we select Thinly Deduped under allocation settings for the volume.

As for the dedup ratio, also in the GUI I select Provisioning, and then select the virtual volume that are exported and select the tab "Virtual Volumes".

As for the ratio for the whole system I select CPGs and then the tab CPGs, after that I select the CPG we are using and the summary screenshows the Capacity Efficeny. 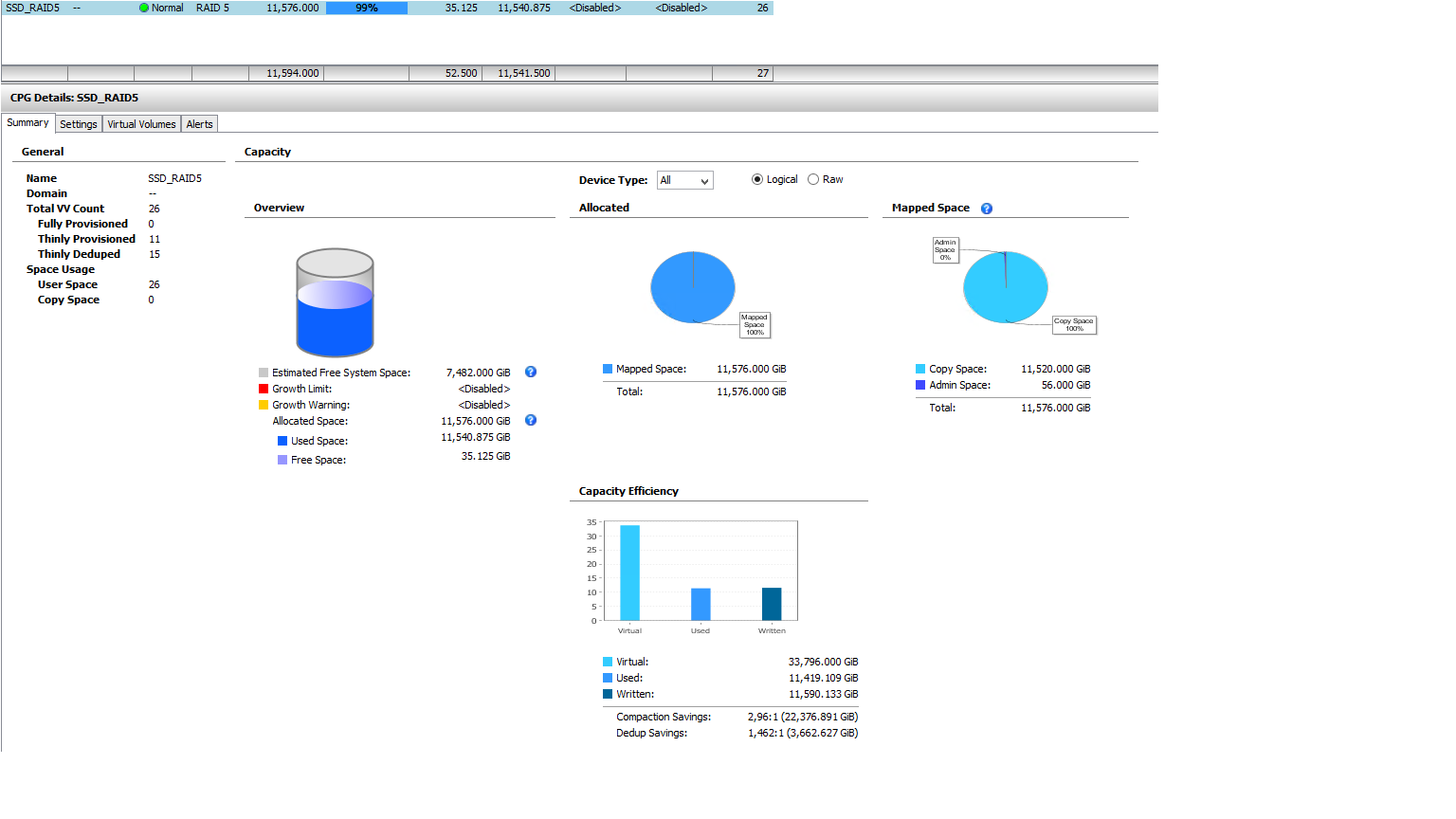 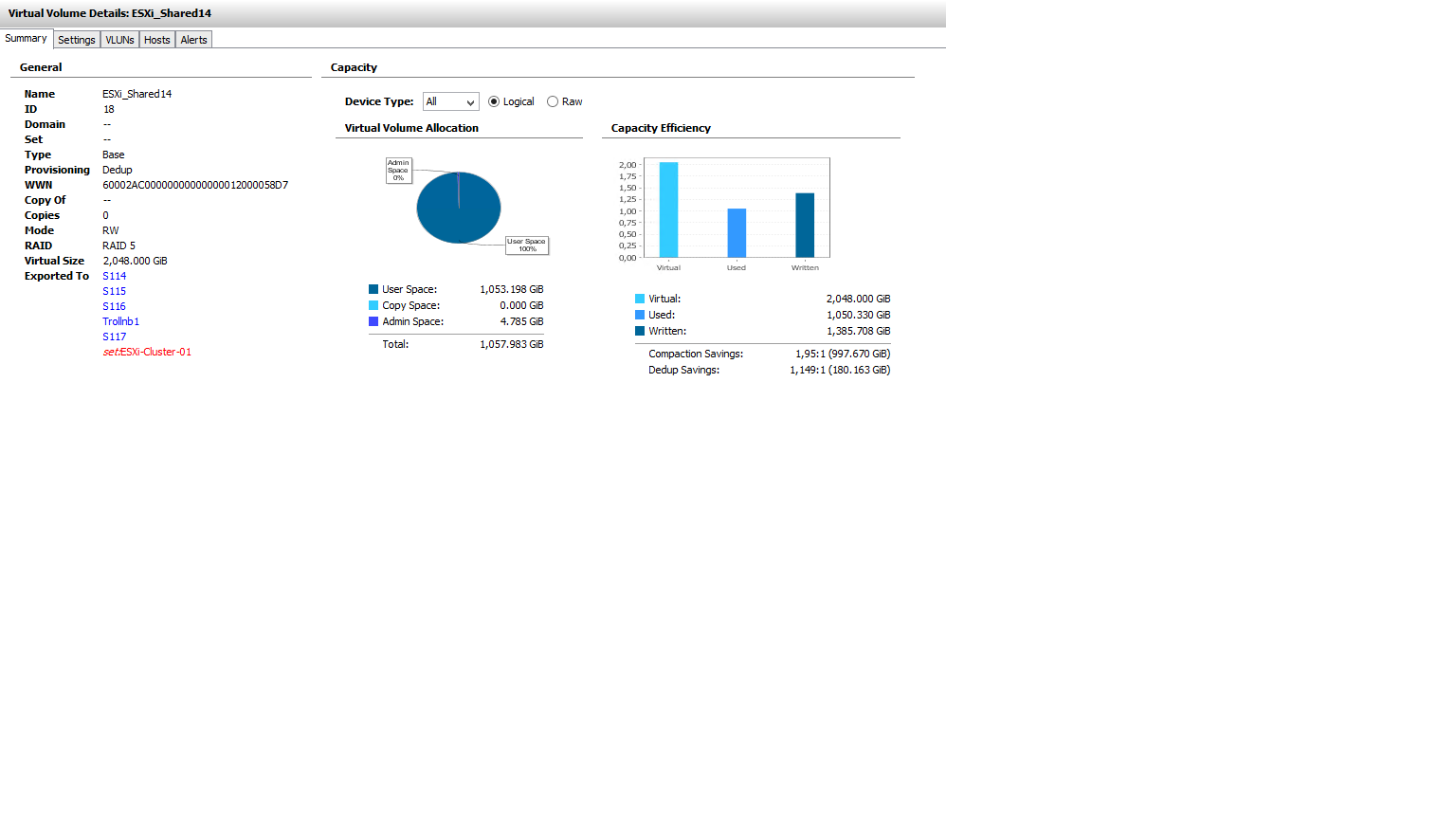 >also in the GUI I select Provisioning

We still have the same problem. We have a case open with HP but that hasnt given us any answers yet. They suggested reformating all our servers to use 16k blocks but that isnt a possibillity.

Anyone got any ideas? Is it possible to run a scheduled deduplication task on 3Par?

...  Is it possible to run a scheduled deduplication task on 3Par?

No. The action of deduplication occurs in real-time by the controller nodes' ASIC as data is written to any volume in the CPG. There is an automatic system garbage collection function that scans every five(?) minutes.

Make sure your array is patched up-to-date.

Does anyone know a good tool for converting cluster size without reformating all the disks? 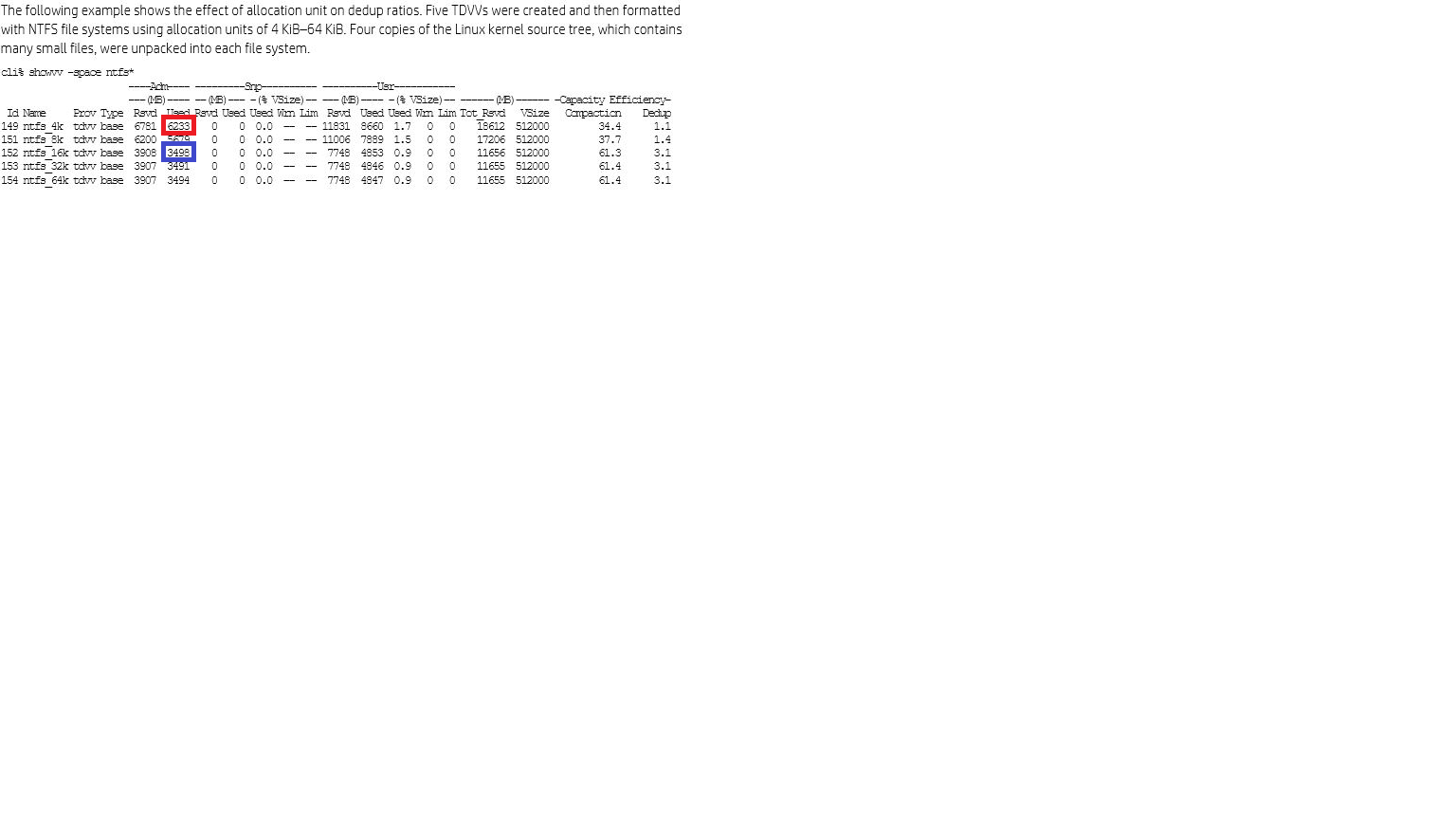 FYI, the problem with any hypervisor system is at the guest OS level: The guest needs to allocate on the 16 KB cluster size. The hypervisor, in this case ESX, just maps the guest's virtual file system to the physical file system.

Did you find any tool that can non destructively change the block size to 16KB?? I am facing the same issue here, my Guest OS is Windows 2012 R2. I found Acronis Disk Director but it doesn't support Windows 2012 Server R2..

No way that I've tried BUT there is this tool, it says you can change the cluster size online but do research further and remember to backup before attempting this!

Maybe you might want to try on a test server first...
Best Regards,

Note: The opinions & comments above are my personal opinions, not of Hewlett Packard Enterprise
----------
If my post was useful, click on my KUDOS! thumb below! Thanks.
0 Kudos
Reply
The opinions expressed above are the personal opinions of the authors, not of Hewlett Packard Enterprise. By using this site, you accept the Terms of Use and Rules of Participation.