I have a virtual volume which has been configured across 2 CPG's. CPG1 consists of SSD disks and CPG2 consists of FC disks.

In the past I think that we the VV ran out of space on the CPG1 ( SSD ) so another was somehow added using CPG2 ( FC disks ) and the volume extended. 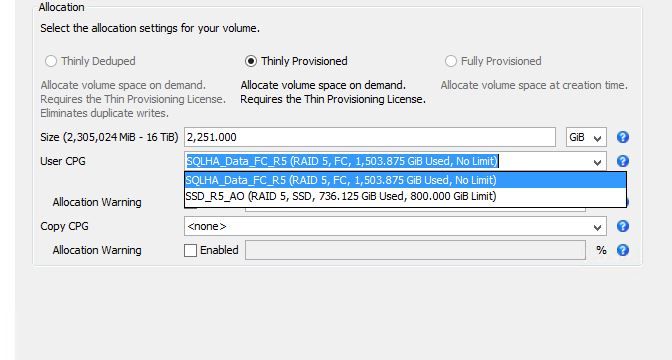 I didn't think this could be done and that there was a 1:1 relationship between an VV and CPG.

I have been increasing space of the VV and I believe it has been taking space from the FC CPG, but I don't understand how this is defined.

Can anyone enlighten me on how this has been achieved ?

You have created VV initially based on one CPG which is SSD CPG. Later you faced situation like running out of space for SSD drives and then you have added FC drives and created FC CPG. In this situation when new write comes to that VV and it's not able to find space on SSD CPG then system automatically look for other CPG different drive type(in this case FC) and create LDs accordingly and allocate space there to accomodate that write request. That is how same VV data can be distributed among SSD and FC CPG.  Also if you have Adaptive Optimization (AO) configured then also you can see same VV data distributed among both CPG. To know exact details you can check below commands,

Thanks for you reply.

Can you tell me a what percentage of SSD disk full would the VV start to use the second CPG.

Also is there a way of manually forcing this, or is it always an automatic thing ?

Manually we can't control it because you never know when an IO may come and if LD need to be created for the same.