Also how do I find out which 2 need licenses, I don't see a report for this and the line that says need two is not a hot link. 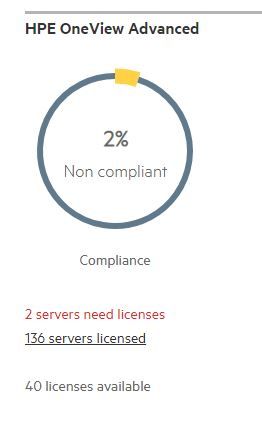 Any guidance would be appreciated

OneView fails to assign the embedded OneView license to devices. This occurs because OneView adds all licenses imported to the license pool. If this embedded license is added to the OneView pool manually through the GUI, it can be consumed by a different device. This then leads to a license unavailable scenario.

If you are unable to identify servers  then please log support ticket with HPE support team, to look into OneView database and fix the issue by releasing available license from OneView database.

Thanks, is their an easy way to identify those 2 servers amongst the hundereds I have? A HP-OV PS query or something if needed?

Yes, Get-OVLicense.  It will generate a report of licenses and nodes that are assigned to the license.  Here is a sample output that you should see when runnig the same command:

Then, you can use the following to view all of the nodes that need a license: