A question recently came up from a customer during a demo of the VVols feature in Nimble OS 3.0 release. After a couple of storage admin tasks, and couple of vSphere admin tasks, we got to create Virtual Machines and power them on. At this point, the customer was surprised how we got to this so quickly asked “Wait, where do I setup storage access control, before all this can work?” It was only logical to respond with: “Do you really want to set that up yourself? Wouldn’t you be happy that’s done for you?"

This is just one example of how VMware VVols and Nimble Storage implementation helps users do more with less - by automating several mundane tasks and improving the interaction between vSphere admins and storage admins.

In this blog entry, we’ll cover the three steps required to start using VVols. The initial two steps are addressed using the Nimble Storage UI.  The final step before creating virtual machines is addressed using the vCenter UI. Naturally, which administrator (Storage, Virtualization, or Generalist) completes each of these steps will be specific to your environment.

Nimble’s VASA Provider is an implementation of vSphere APIs for Storage Awareness (VASA) specification. The VASA Provider allows vCenter and ESX to understand and manage the storage topology, the capabilities of the storage system and access to each VVol.

The VASA Provider is included in the Nimble OS and runs on the group leader. This is a key benefit for multiple reasons:

In addition, the VASA Provider registration is centralized in the Nimble UI. The storage administrator can manage the VASA Provider, and the vCenter Plugin for thick client and the web client from a central location (Administration > VMware Integration). 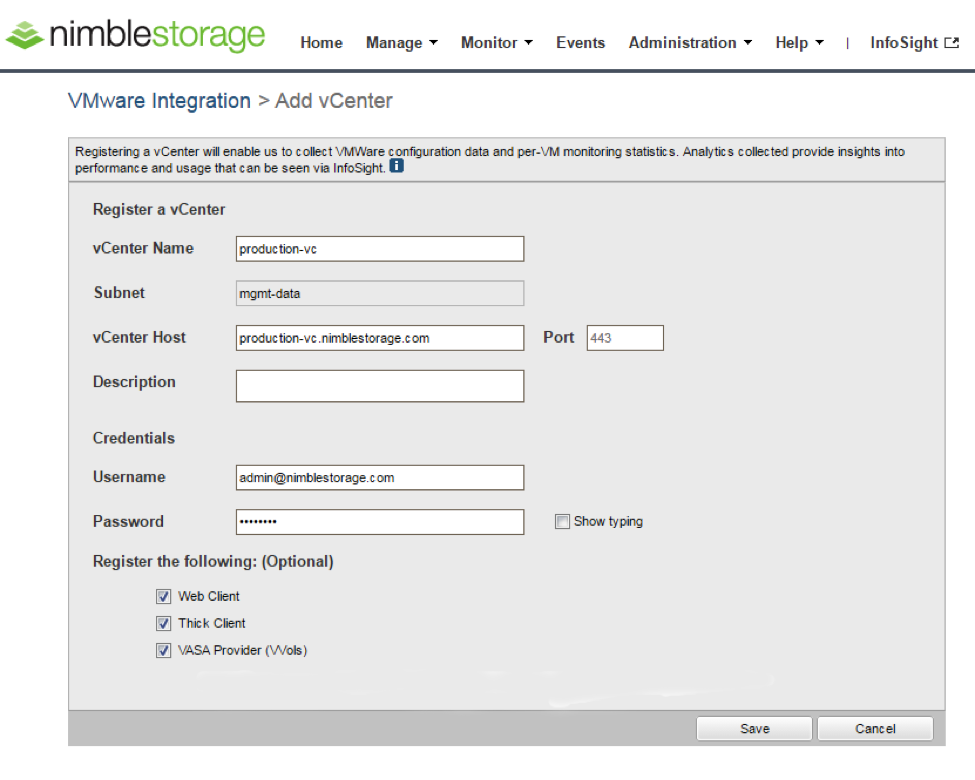 The administrator delegates a certain amount of storage to be utilized by a vSphere environment for VVol use. A new storage construct – “Folder” is available in Nimble OS for this purpose. A folder is a logical unit of capacity and will be the backing storage object for a VVol datastore. 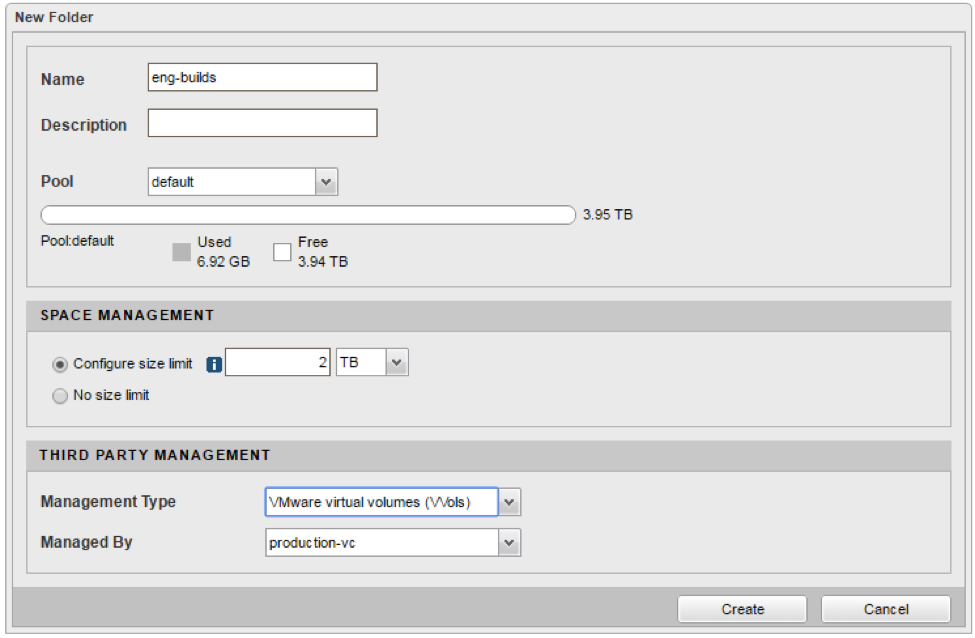 Here the administrator chose to allocate 2 TB with the name eng-builds to vCenter server named production-vc.

Multiple VVol folders can be assigned to the same vCenter server as well, for multi-tenancy deployments. vCenter Server RBAC can then be utilized to control access to the VVol datastores.

The administrator has access to the capacity allocated to the vCenter server by the storage administrator. The Create Datastore wizard is used to choose VVol as the type of the datastore and the hosts and clusters to which the datastore should be accessible. 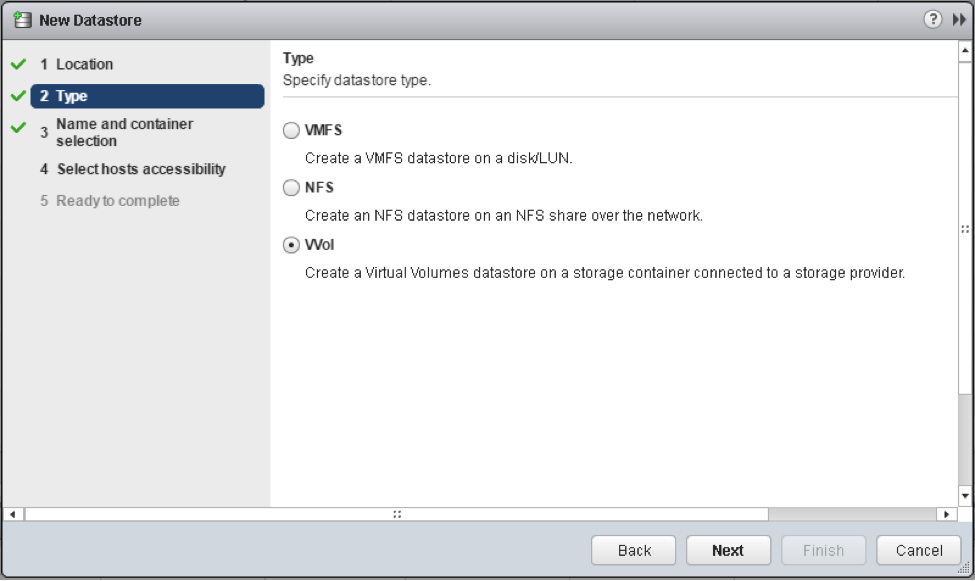 Behind the scenes, Nimble’s VVol implementation simplifies and automates secure access to storage from the vSphere environment during this operation.

Each pool in the Nimble Storage system has an automatically provisioned Protocol Endpoint (PE) when the first VVol folder is created. IO for all VVols in the pool flows through this PE. By default, no ESXi host has access to this PE.

Each ESXi host that the VVol datastore is mounted on establishes a VASA session with the provider. Certificate authentication is used to secure this communication. Once the session is validated, the provider creates an initiator group for each ESXi host, and an access control entry to the PE. The PE is now accessible to the ESXi host, but the host needs to rescan.

Instead of depending on the administrator to initiate this, Nimble’s provider generates a VASA event that signals the host to rescan and recognize the PE.

So, the act of creating a VVol datastore has fully setup a secure data access path.

At this point the vSphere environment has been fully configured for VVol use.  Familiar Virtual Machine management workflows can now be leveraged to create and manage the VMs using the vCenter UI. In addition, administrators can utilize the capabilities of Nimble OS through vCenter server’s policy based management engine. Because Nimble Storage’s implementation of VASA maps a volume to a  VMDK, vCenter  administrators have an extremely fine grained control over storage configuration such as; performance, encryption, space savings (compression and dedupe), snapshots, and replication.

In this blog entry we’ve described the three simple steps required to start provisioning VVol based virtual machines on Nimble Storage.  We’ve also “pulled the covers back” and explained some of the inner workings of Nimble Storage’s VASA implementation. Subsequent blogs in this series will dive into the VM granular capabilities provided by Nimble Storage VVol implementation.