Before the advent of the industrial internet, information technologies (IT) and operational technologies (OT) lived in two different worlds:

Pre-IoT IT and OT had little incentive to commingle. They were owned and operated by two different sets of resources. OT infrastructure has always been outside the IT domain. IT has never appreciated the nuances of OT systems. The data sharing is therefore limited, unidirectional, and mostly transactional.

However, IoT bridges the gap between IT-OT rapidly. Data is no longer just under the purview of IT or OT. While OT has been collecting detailed operational data for as long as IT, it was just mostly isolated to the plant or field. Smart and connected devices which are under the purview of OT enable additional data collection, assimilation, and control which is analyzed and fed back by IT to OT. There is a need to collect, store, and analyze data in a cost-efficient and timely manner. The convergence is spilling over data and insight from one side of the gap to the other. The convergence led the industry to recast the boundaries for IT and OT and also enables IT and OT to blend their data and system.  It led to a tiered data-centric model known as Core-Edge-Endpoint.

The industry is moving into a new paradigm known as the "Intelligent Edge," which is about delivering data and resources to people and things via networks. 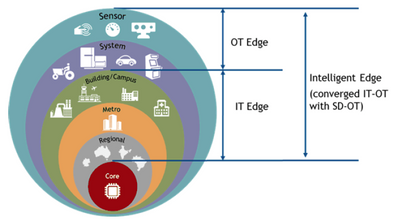 Moving OT functions onto a converged tier requires making much of it software defined. Software defined OT (SD-OT) moves OT functions into software running on industry-standard hardware, which can access or even host OT control systems. Alternatively, OT-related control and data acquisition functions are network-based and can be performed from the Core or anywhere in the Edge. With SDOT, the OT software, like IT software, can run on bare-metal on virtual machines and increasingly inside application containers. As a part of the IoT initiative, firms can fully shift development burden from hardware to software.

What HPE has to offer in Converged Systems?

HPE introduces the IoT Edgeline portfolio in the summer of 2016. The Edgeline EL10 and EL20 are Intel Atom-based, industry-standard, general-purpose IoT Gateways for data aggregation, transfer, and persistence. On the other hand, the Edgeline EL1000 and EL4000 Converged Edge Systems are Intel Xeon-based industry-standard servers, designed with a generous amount of compute, data capture and persistence, and integrate OT functions such as control, data acquisition, and industrial networks.

In 2017, HPE launched the Edgeline Services Platform (ESP) — a software foundation layer on which HPE and its partners can develop and deploy software-defined and converged IT–OT applications such as combined data capture and analytics. HPE intends to maintain ESP as an open platform; it can run Linux or Windows and incorporates the PXI modular electronic instrumentation platform standard for control and high-speed data capture. ESP also includes:

HPE believes that Edgeline and ESP enable the company to build a SD-OT ecosystem, one in which the Edgeline systems are themselves controlled from the Core or the Edge. HPE wants to empower firms to replace separate proprietary routers and switches with a Converged Edgeline platform, which runs all IT and OT software centrally.

The HPE OEM hpe.com page showcases the quality, experience, and pedigree of the HPE OEM program and why our customers are choosing HPE. Visit the new site today!

Join in the conversation on LinkedIn.