I have a HP DL360e Gen8 without disks. I'm thinkig about getting one or two Intel 750 or P3500 NVMe SSDs. According to the specifications the DL360e has two PCIe slots out of which one is PCIe 3.0 x16 and the other PCIe 2.0 x8. In theory these shold be good for two Intel NVMe SSDs.

Do you think they will work fine in the DL360e Gen8? Will they fit? Can you tell me what are the pros and cons by using PCIe NVMe SSDs vs SAS SSDs like the Intel S3500? Can one Intel P3500 NVMe SSD outperform two Intel S3500?

Any opinion on this subject would be highly appreciated.

Are you still in hacking mode (from your previous posting)? :)

You should check all physical requirements first. The P3500 are half-height half-length x4 slot cards and as you said the server has one x16 slot which per the quickspecs is full-hight half-length.

Then check that there P3500 are supported under the OS you are using or they come with the necessary drivers.

Performance-wise, the P3500 have better specs than the S3500. Also in addition, (I assume you are thinking of the SATA SSDs), the SATA interface is one draw back and anothe is that the SSDs would be attached to an SA controller. The I/O would come to the server from the controller and not directly from the disks.

Yeah, I'm so much into hacking that I'm thinking I should join the Anonymous. :)

Thank you so much for laying out all the important things I need to check out before going with a NVMe. So it seems like the P3500 would be the best choice. It should fit and won't be limited by the PCIe slot speed.

As OS I plan to use FREENAS as it will also support virtualization from the next version on. It should handle storage, virtualization and maybe my home networking, using pfsense as a virtual machine. It would be a perfect fit for what I plan to do. 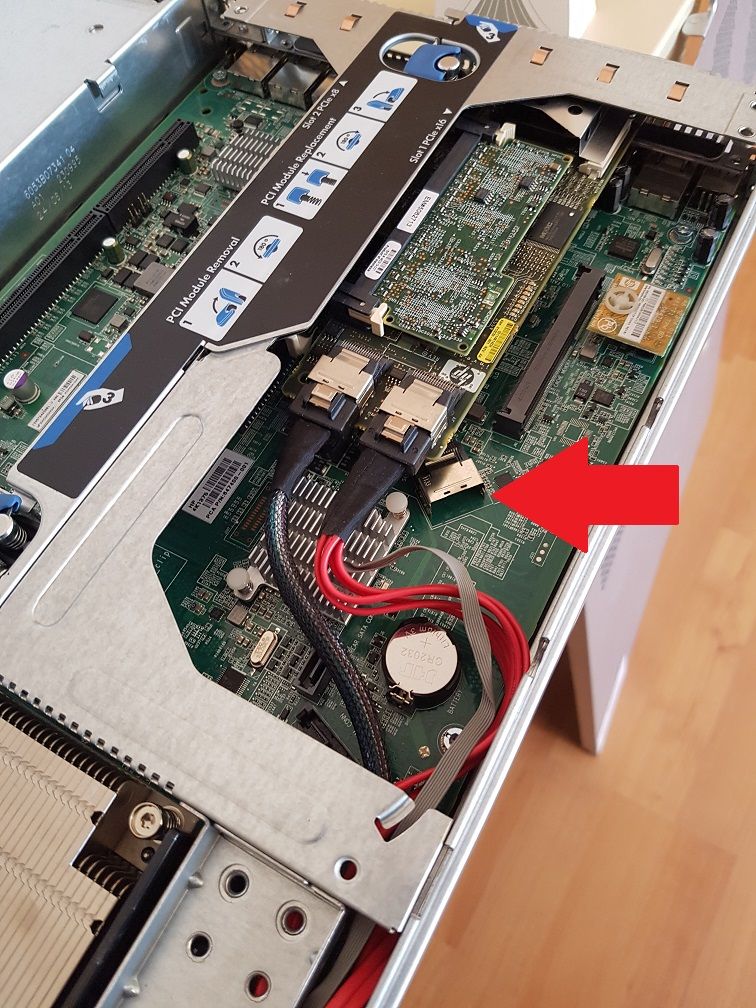 If I decide to remove the HP Smart array controller, is this where I should plug the SAS cable from the disk cage(see the pointing arrow in the picture)? Currently there are two cables running into the HP SA Controller and that slot on the board is only one. What should I do with the second cable?

[ADMIN: This link is no longer valid]

Short answer with yes or no is okay. Maybe verfitication if this accelerates exitent OS and databases by so that one would see it imedatly or if this is nonsense.

Did you succeed to connect a NVMe drive to your HP DL360e Gen8?

How do you ensure redundancy if the NVMe gets a failure?

Your disk in the front will be connected to the HBA and the HDD Backplane is a SAS Expander and all your drive will be presented to freenas. But before you start backup all your data on the drives..

It is working and the performance is great with ZFS and Freenas but if one drive fails from hardware raid you got big problems turning up and it takes weeks to restore.

I recommend to you SAS controller out HBA in.  And one thing will happen if you put the Intel NVMe inside. Than 6 fan will spin by 80% and more the entire time.. And you know they loud. reason is the air flow. the intel card is blocking the heat. And it does not matter if the intel card is left of the riser or right. the fans will spin up. they will work but i never did them to get to boot the windows os from. So i used it for database. for many read and write requests. HPE says it is not supported but this does not mean it is not allow to use it.

Some raid controller you also can flash the firmware and they turn into HBA.